In this paper, new aerial vehicle is proposed for rescue mission. This new and developed aerial vehicle can be named as Samarai Mono-Copter (SMC) with especial and novel design. The mission is considered as mountain rescue operation to show the ability of SMC vehicle about life saving. SMC can be used widely in the many field of human life such as accident, earthquake, military injuries and many other missions about human life and lifesaving.

Millary et al. applied the theory of partially Markov decision processes to design of guidance algorithms for the motion of unmanned aerial vehicles. They use on-board sensors for tracking ground targets. Also, they introduce a new approximation method called nominal belief-state optimization [1]. Han and Bang investigated proportional navigation guidance law to avoid collision based optimal method [2]. In 2006, autonomous operation demonstrated for unmanned air vehicle by Ma et al. [3]. Eng et al. described the status of a program to develop an automated landing system for UAVs. From their studies, it was believed that the decision processes were considered to utilize human expert knowledge and fuzzy logic [4]. In 2010, Paw and Balas presented an integrated framework for small unmanned aerial vehicles flight control development [5]. The multi objective genetic algorithm is used to simplify the optimal determination of fuzzy logic controller parameters based on an efficient cost function [6]. However, there are not complete investigation about micro aerial vehicles like Samarai with one wing and also, radio controller are used that made by Lockheed Martin's Intelligent Robotics Laboratories [7]. Kellas investigated designing and development of controllable single-blade autorotation vehicles in 2007. Testing a simulation results were investigated to provide insight in selecting the best control concept and hardware for the final guided samarai design. The free flight simulation results predicted approximately 10% of experimentally observed performance while the coning angle was predicted 25% of the observed angle [8]. In this work, advantages of new aerial vehicles (SMC) against traditional UAVs are demonstrated to show the new abilities especially in human life. Next, applications of novel aerial vehicle as Samarai Mono-Copter (SMC) are illustrated for human life and lifesaving missions. At the second, new dynamic of the SMC is derived by considering the current wind effects in the rescue missions of mountaineer’s lifesaving. Finally, the optimal guidance based on the new mathematical method is proposed to solve this alpinism rescue operation.

What if it could help save lives during an avalanche, protect our life or business? With respect to the new development of aerial vehicles many civil activities are ascertainable quickly during human life, human accidents, earthquakes and many other activities. These years, unmanned aerial vehicles are utilized widespread in the all field of human life. However, there are some difficulties to utilize traditional UAVs such as, needing proper runways especially in landing for human activities like rescue in an accident. Next, to solve some difficulties that mentioned in the above, quadrotors are developed to facilitate human life. Now, Google Company utilizes this vehicle for delivery to customers. However, these civil activities that belonged to Google Company have some difficulties. For example, quadrotors need more power because, use more than one propeller. Also, over production sound is not suitable for life town. Moreover, if the vehicles are not autonomous, it makes other difficulties such as controlling these civil vehicles. Therefore, this scientific branch of civilization needs some developments to overcome mentioned difficulties.

This paper proposes a new method to increase the human life comfort. SMC vehicle that can be lying in the new aerial vehicles is one of the best answers to the next civil human usages. SMC generates lower noisy sound. Also, SMC no needs more power so, it has low weight and therefore it can deliver heavy payloads for human activities especially in the accidents, earthquakes and conflagrations. Also, runways or special regions for landing and grounding are not necessary. The most important key is controllability of this vehicle by people without especial trainings. Therefore, in this paper this vehicle that named as SMC is proposed and developed to increase comfort human life.

One can demonstrate the other advantage of SMC as ability to vertical flight. Vertical flight and imagining exhibition in commemoration is the new human activities of the SMC in the human life. Also tourists can utilize this vehicle to take photographs and films from traditional places that cannot be seen commonly. From other point, thermal imagining technology is deployed to search for injured victims of vehicle accidents. Town traffic intensifies assisting in the recovery of the lost victims. SMC can find the locations of accident regarding to imagining and decrease injuries sustained on the impact and/or from environmental exposure. Moreover, SMC can be operated by smartphones based on developed applications by utilizing GPS technology to set flight trajectory. Although, many UAVs are designed and tested for outdoor use, micro Samarai Mono-Copters (MSCMs) can be utilized as smaller and toy-class for indoor places. Finally, we can say these new and developed aerial vehicles will grow the enjoyment of human life.

The seeds exhibit remarkable stability during their fall from tree. A steady state gyration is happening when random toss accrues. In the steady state, the leading-edge of the seed cutting the air flow and the seed rotates about the vertical axis. Next, the wing is tilted down towards the nut therefore; the wing tip traces out a cone relative to the root. The wing falls along a helical path when the tilt and the pitch of the wing remain largely constant. Bellow three phenomena of maple seeds are listed that help people to build SMC from the nature behavior:

I. Asymmetric mass distribution of the seed, with the center of mass far away from the centroid of the seed.

II. The aerodynamic damping that initiates a tilt of the seed which eventually evolves into a helical motion due to the rigid-body dynamics.

III. Aerodynamic force in the steady state that balances the weight of the seed and the centrifugal force.

If one watches a maple seed spiralling down from a branch, may have marvel at how it looked like a tiny one-rotor-bladed helicopter. Above three main laws answer this question and also, lead human to construct a new and novel aerial vehicle from phenomena caused by the old mother of nature (Figure 1).

Figure 1: The Samarai design that inspired by nature’s maple seeds.

SMC has a servo motor to control the rotation and heave flight for wing flap. Precise control of angular position is allowed by actuator as servomotor. Servomotor is coupled to a sensor as GPS for position feedback. The key point is focused on sophisticated controller that engaged in controller and flight computer. In the mountaineer rescue operation, the position of mountaineers is loaded in the flight computer. It is important for mountaineers to receive first aids in the minimum time. Therefore, path planning to go to mountaineers are very important. Thus, in this work based on optimal control theory, minimum time path planning or trajectory designing is demonstrated to develop this aerial rescue vehicle as lifesaving operation. In the figure, SMC that manufactured in the K. N. Toosi University of Technology is shown for rescue mountaineer lifesaving (Figures 2 and 3). To obtain optimal path planning for SMC, bellow system dynamic for the motion of rescue vehicle is considered. It should be noted that the three dimensional system dynamic considers the wind effects. Considering wind effects in the predefined motion leads to simulate real weather conditions because, it is important to program safe rescue mission based on the winds that will affect the SMC mission to deliver first aids for mountaineers.

Where u, v, w are non-dimensional wind velocities as

and V is relative velocity of SMC vehicle. Also

are non-dimensionlized parameters regarding to mountain winds characteristics. Novel mathematical algorithm based on the optimal control theory and Imperialist Competitive Algorithm (ICA) as optimization method is demonstrated in the next part.

The ultimate goal of optimization is to minimize efforts and maximize profits. Required efforts and suitable profits under any practical situation could be expressed as a function of decision variables. Consequently, optimization can be defined as a process of finding circumstances under which minimum or maximum of a given function could be found. 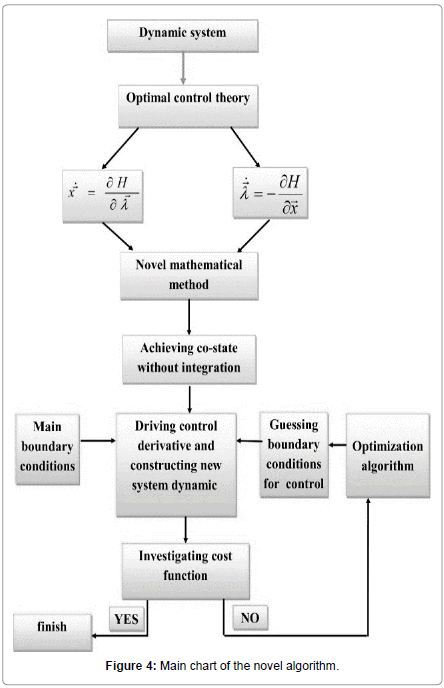 Imperialist competitive algorithm (ICA) is a novel optimization method based on socio-politically motivated strategy. This method is a multi-agent algorithm with each agent being a country. ICA starts with an initial population as countries. All countries are divided in two groups as imperialist and colonies. Main idea of this new algorithm is based on “the more powerful of the imperialist, the more colonies”. Imperialist attempts to achieve more colonies and the colonies start to powerful imperialist. In this way, during the competition, the powerful imperialist will be improved and the weak ones will be collapsed. Assimilation or movement of colonies toward the imperialist is demonstrated by two parameters as assimilation coefficient and assimilation angle coefficient. For more information in this area see refs [9-12].

In this problem, main cost function is considered as minimum time criteria. At first based on optimal control theory, Hamiltonian of the system should be obtained [13].

Main cost function is considered as minimum-time so, L =1. Also, formulas for obtaining co-states equations regarding to optimal control theory are:

Based on the above equations, one can obtain two unknown variables such as two co-states analytically. Moreover, for minimum time cost function that final time is free and explicit terms for time (t) are not seen in the system equations the Hamiltonian is equal to zero. Therefore, three co-states can be determined as:

Now, proposed algorithm is utilized based on the analytical solutions for co-states. Hence,

are obtained to construct new optimal system equation regarding this novel algorithm to solve this optimal minimum time path planning for rescue mission. If one considers the rescue-station position as origin, the mountaineer’s position will be considered as

. The amazing result is demonstrated by minimized time as. It is very important for lifesaving of mountaineers to receive first aids in the seven seconds for rescue operation. Figure show the three dimensional trajectory of the SMC for mountaineer’s rescue mission (Figure 5).

This paper proposes a new method to increase the human life comfort. Samarai Mono-Copter (SMC) vehicle can be considered as a new aerial vehicle as one of the best answers to the next civil human usages. In this way, advantages of the new aerial vehicle against traditional UAVs are demonstrated to show the new abilities. Next, applications of novel aerial vehicle (SMC) are illustrated for human life and lifesaving missions. Also, new dynamic of the SMC is derived by considering the current wind effects in the mountain rescue mission. SMC can deliver first aids payloads for mountaineers in the few seconds. Vertical flight and imagining exhibition in mountain injuries are the new human activities of the SMC in the human lifesaving. Moreover, for testing this vehicle (SMC), the rescue-station position is considered as origin and the mountaineer’s position is considered far from origin on the mountain. The amazing results not only illustrate the accuracy to satisfy the final position of mountaineers accurately but also, rescuetime is minimized as 7.02(sec) tf = . It is very important for lifesaving of mountaineers to receive first aids in the seven seconds for the rescue operation. Finally, we can say this new and developed aerial vehicle (SMC) will grow the human lifesavings and the human enjoyments. 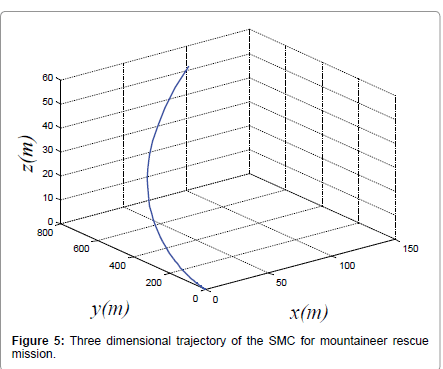 Copyright: © 2017 Shafieenejad I, et al. This is an open-access article distributed under the terms of the Creative Commons Attribution License, which permits unrestricted use, distribution, and reproduction in any medium, provided the original author and source are credited