Defects in the maxillary jaw can be congenital, developmental, acquired, traumatic or surgical involving the oral cavity and related anatomic structure. Absence or loss of some or all of the soft palate and/or hard palate results in insufficient structure or altered function of the remaining tissues. Defects can cause disruption of articulation and airflow during speech production and also nasal reflux during deglutition. Patients after surgical resection have altered anatomy due to scaring, tissue contracture, lack of bony support and tissue edema. These patients have problem of regurgitation of water and food through nose and difficulty in speech. These changes require the fabrication of prosthesis and also sometimes repeated prosthesis adjustments to confirm to the soft tissue changes. To prevent this and to help the patient in deglutition and speech defects must be restored with prosthesis. In such situation an obturator is designed to close the opening between the residual hard and/or soft palate and the pharynx. The prosthesis provided for these patients are called as obturators. An obturator is a prosthesis which is fabricated for the patients with the palatal defects in the form of cleft lip and palate, oroantral fistula or surgical resection after removable of pathology like tumor or cancer. This case report will highlight on the Prosthetic Rehabilitation of the maxillary defects and the types of obturators and technique followed in fabrication of an obturator in hemimaxillectomy patient.

Most common intraoral defects in the maxilla are in the form of an opening into the antrum and nasopharynx. Maxillary defects can be congenital, developmental, acquired, traumatic, or surgical involving the oral cavity an related anatomic structure.

Absence or loss of some or all of the soft palate and/or hard palate results in insufficient structure or altered function of the remaining structure. Defects can cause disruption of articulation and airflow during speech production and nasal reflux during deglutition. Nasal sounds such as “n,” “m,” and “ng” is seen due to the absence of closure of the pharyngeal wall. Patients after surgical resection have altered anatomy due to scaring, tissue contracture, lack of bony support, and tissue edema. Surgical resection can lead to the restricted opening of the jaws and altered range of mandibular movements with fibrosis and trismus. These patients have the problem of regurgitation of water and food through nose. There may be difficulty in speech, deglutition, maintaining oral hygiene, and prosthetic treatment.

To prevent this and to help the patient in deglutition and speech, defects must be restored with prosthesis. In such situations, a prosthesis called as an obturator is designed to close the opening between the residual hard and/or soft palate and pharynx. These changes require the fabrication of prosthesis and sometimes repeated prosthesis adjustments to confirm the soft tissue changes. Obturator is derived from the Latin word “obturate” which means to close or shut off.

Prosthesis facilitates speech, and deglutition by replacing those tissues lost due to the disease process and can, as a result, reduce nasal regurgitation and hypernasal speech, improve articulation, deglutition, and mastication.

Followings are the objectives of maxillary obturator:

1. Restoration of esthetics or cosmetic appearance of the patient.

1. Help the patient to carry out natural functions such as phonation, deglutition, and mastication.

3. Design of the prosthesis should be such that it is easily and swiftly placed and held in position both comfortably and securely.

4. Prosthesis should be durable for a reasonable period of time, retain its polish and finish.

5. Should be easy to clean so as to maintain hygiene.

There are various functions of obturator:

3. To keep the wound or defective area clean, thus enhance the healing of traumatic or postsurgical defects.

4. As a stent to hold dressings or packs post surgically.

5. To reduce the possibility of postoperative hemorrhage.

6. Help to reshape and reconstruct the palatal contour and/or soft palate.

7. Improve speech or in some instances, makes speech possible.

8. Help in reducing the flow of exudates, saliva, and fluids from the mouth into the nasopharynx.

9. To improve the esthetics and correct lip and cheek contour.

10. To benefit the morale of the patient with maxillary defects.

11. To improve function when deglutition and mastication are impaired.

1. To act as a framework over which tissues may be shaped by the surgeon.

2. To serve as a temporary prosthesis during the period of surgical correction.

3. When surgical primary closure is contraindicated.

5. When size and extent of the deformity contraindicates surgery.

6. When local avascular condition of the tissues contraindicates surgery.

7. When a patient is susceptible to the recurrence of original lesion that produced the deformity.

Mohamed Aramany in 1978 classified obturators for maxillectomy patients who are partially edentulous into seven groups [5]:

a. Class I: Resection or defect is performed along the midline of the maxilla; teeth are maintained on one side of the arch. It is the most frequent maxillary defect.

b. Class II: Defect is unilateral, retaining the anterior teeth on the contralateral side.

c. Class III: Palatal defect occurs in the central portion of the hard palate and may involve part of the soft palate. The surgery does not involve the remaining teeth.

d. Class IV: Defect crosses the midline and involves both sides of the maxilla. There are few teeth remaining which lie in a straight line. This may create a unique design problem similar to the unilateral design of conventional removable partial dentures.

f. Class VI: Defect occurs mostly in trauma and the defect lies anterior to the bilaterally standing abutments. Surgical intervention of anterior midpalatal pathology can cause such type of defects.

g. Class VII: This situation is similar to Kennedy Class II, but the defect is small unilaterally posterior to the standing abutments. This situation usually arises as a result of minor surgery for removal of pathology or can occur as squeal of multiple extractions in the posterior regions (Figure 1). A 36 year old male patient presented to the outdoor of Prosthodontics department, IndraprasthaDental College, Sahibabad, Ghaziabad. The patient had a history of Ameloblastoma in the right maxilla for which he had undergone a hemimaxillectomy type of surgical resection ten years ago.

The patient had an Aramany Class IV defect and was using obturator prosthesis for the last ten years. His chief complaints with the previous obturator were its looseness, foul smell and unaesthetic appearance. The patient was a laborer by profession and medically and physically fit.

On extra oral examination there was a tissue contracture visible on the right side of face (Figures 2 and 3).On intra oral exam it was observed that the left maxillary quadrant was intact with all the teeth present except left upper central and lateral incisor. The mandible had a full component of natural teeth and the oral hygiene was fair. The patient had normal mouth opening and jaw movements. A mature maxillary aramany Class IV defect on the right side was present with the loss of all teeth from left upper lateral incisor to right upper third molar. The defect had a communication with the nasal cavity and mild lateral undercuts were present (Figure 4). The previous obturator was an all acrylic ill-fitting removable prosthesis. The support and retention was inadequate but it had stable occlusal contacts with the opposing dentition. The ten years old acrylic denture base showed signs of disintegration such as foul smell, discoloration and staining. 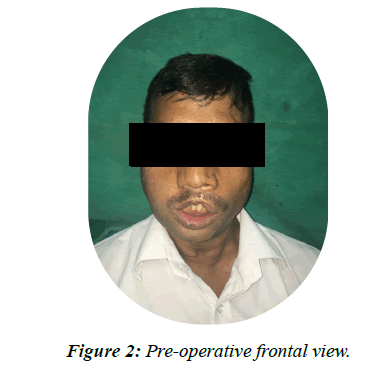 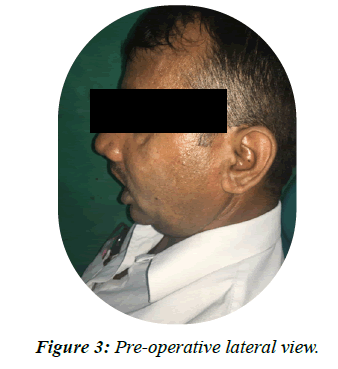 After thorough evaluation of the patient it was decided that new acrylic obturator prosthesis will be fabricated for him. A cast partial framework and/or implant supported prosthesis were not selected because of financial constraints of the patient. 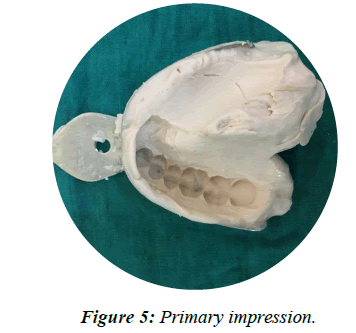 • Special tray was fabricated on primary cast on the area of defect. The defect was recorded with help of low fusing compound and finalimpression was made with light body addition silicone (Figure 6). Figure 6: Bordermoulding and secondary impression of the defect.

• Now a pick-up impression of the upper arch with the obturator in situ was taken in a stock tray using irreversible hydrocolloid alginate impression material (Figure 7) and poured in type IV gypsum (Figure 8). • Lower impression in a stock tray with irreversible hydrocolloid alginate material was taken and poured in type IV gypsum.

• The interocclusal bite record was used to articulate the upper and lower casts.

• Surveying of the upper cast was done on a surveyor to determine the favorable and utilizable tooth and tissue undercuts. A suitable path of insertion was selected for the obturator.

• On the articulated casts, wrought wire clasps on left upper left canine, first and second premolar and second molar were made (Figure 9). 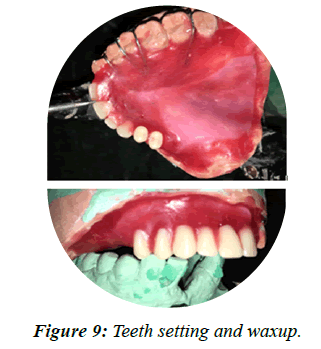 • Anterior teeth must be placed according to smile line but it wasn’t possible in this case because of skipping a separate jaw relation step where smile line is recorded on wax rims so they were placed for denture stability with minimum overjet and overbite. However, incidentally the final outcome was pleasing and the curve of the upper artificial teeth was in harmony with the smile line while the posteriors were placed in maximum intercuspation with the opposing teeth.

• Post dam carving and final wax up with full palatal coverage was done. The palatal contour on the defect side was formed as a continuation of the palatal form on the normal side (Figure 9). • Processing, finishing and polishing the new obturator was done, the bulb of the defect was removed and hollowed from inside to reduce the weight of the prosthesis (Figure 11). • During insertion the tissue surface was checked for intimate tissue contact with a pressure indicating paste and occlusal corrections were performed with articulating ribbon. Oral and denture hygiene instructions were given to the patient and called for follow up visit one week after the insertion.

• On the follow up visit the patient presented with no complaints. Oral and denture hygiene instructions were reinforced and the patient was set on a 6 month periodic recall visit for follow up (Figures 12-14). 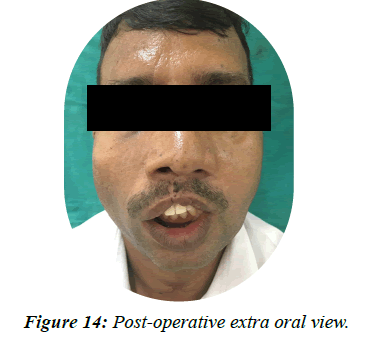 Maxillary obturator prosthesis was fabricated for a patient with hemimaxillectomy defect. The patient was a satisfied old obturator wearer but after ten years some tissue changes had occurred making the previous obturator loose. The acrylic had started disintegrating giving foul smell and poor appearance. Financial constraints of the patients limited our treatment options and precluded the selection of cast partial framework or treatment with dental implants so a simple acrylic obturator was planned for the patient.

The pick-up impression was taken in irreversible hydrocolloid alginate impression material in a stock tray which recorded the rest of the arch and the remaining dentition. Bite record in the form on an occlusal wafer was recorded and used for mounting of the casts. These records were sufficient for the construction of a new obturator in the laboratory.

Most of the patients having maxillofacial defects limit their social contact. They also don’t prefer frequent visits to the dentist. Therefore, short and simple procedures should be adopted in treating such patients to save them from multiple unnecessary visits to the clinic as described in this case.

The authors certify that they have obtained all appropriate patient consent forms. In the form the patient(s) has/have given his/her/their consent for his/her/their images and other clinical information to be reported in the journal. The patients understand that their names and initials will not be published and due efforts will be made to conceal their identity, but anonymity cannot be guaranteed.

There are no conflicts of interest.