Biology and Medicine received 3315 citations as per Google Scholar report

Familial adenomatous polyposis caused by abnormalities in APC gene is detected in about 1% of patients with colorectal cancer. The prognostic significance of this mutation is extremely high; the risk of developing colorectal cancer in the first 40 years of life is 100%.

Clinical case: A rare case of the detection of multiple primary metastatic colon adenocarcinomas associated with familial adenomatous polyposis is presented. The tumor of the ascending colon was microsatellite stable, with KRAS mutation. The tumor of the descending colon had rather rare genetic characteristics high-level microsatellite instability, HER2/neu amplification, and the absence of RAS and BRAF mutations. Metastases also had different characteristics. An unusual slow disease progression in the absence of pronounced clinical effects of drug therapy is noted. The patient with initially metastatic colon cancer survived more than 5.5 years.

Conclusion: This review affirms the alertness of the attending physicians regarding the possible development of multiple tumors with genetic heterogeneity of both primary and metastatic manifestations of colon cancer in patients with familial adenomatous polyposis.

Familial Adenomatous Polyposis (FAP) is also a severe autosomal dominant disease caused by abnormalities in APC gene. The frequency of the disease is 1:13500-1:31000. In the general population, a causal relationship of CRC with FAP is detected in approximately 1% of patients. It is important to note that the risk of developing CRC in patients with FAP by the age of 40 reaches 100% [3]. Previously, the predictive role of APC gene mutations was underestimated. It was shown that in patients with CRC in the presence of mutations both in APC and KRAS and/or TP53 genes, the prognosis is significantly worse than in the presence of any of those mutations alone [4].

Patient D., 38 years old, had a family history (the mother had multiple colon polyps and was diagnosed with colorectal cancer at the age of 37). In October 2013, because of abdominal pain, a colonoscopy was performed, and diffuse polyposis of the colon was revealed, the histological report was not found in the documentation. Recommendations for further examination and treatment were not given, possibly due to the lack of cancer alertness.

A month later, with intestinal obstruction symptoms, she was hospitalized to a general clinic where a tumor of the descending colon was revealed. Hartmann’s operation was done with the formation of end colostomy. Peritoneal carcinomatosis was detected intraoperatively. Histological examination revealed a moderately differentiated adenocarcinoma with two metastatic lymph nodes (of 9 lymph nodes recovered). In the resected intestine multiple tubulovillous polyps with high-grade dysplasia were found, which includes the distal line of resection. The patient diagnosis was the descending colon cancer T4N1M1 (peritoneal carcinomatosis), mechanical bowel obstruction; diffuse colonic polyposis.

In December 2013 on PET-CT no obvious manifestations of the disease was observed in the right ovary. 6 cycles of chemotherapy XELOX (Oxaliplatin and Capacetabine) regimen were performed from December 2013 to April 2014. On PET-CT scan in June 2014 (2.5 months after the end of chemotherapy)-a tumor mass in the right colic flexure and metabolically active tissue in the left ovary, which at that time was interpreted as a dominant follicle. Colonoscopy in August 2014 revealed an exophytic tumor of the ascending colon; there were fragments of tubulovillous adenoma with epithelial dysplasia grade 2 in the biopsy sample. The observation was continued.

In October 2014 (6 months after completion of chemotherapy), PET-CT revealed a metabolically active tissue in the mesentery, adipose tissue of the lesser pelvis, left ovary, in the stump of the sigmoid colon, in a structurally unchanged right ovary and right colic flexure. Because of the progression of the disease, 3 cycles of FOLFIRI (Folfininc acid-Florouracil IRInotecan regimen) were carried out from November to December 2014.

On MRI in January 2015-left ovary tumor and CA 125 level (106 ng/ml) increasing, but no data on other disease manifestation was presented in medical documentation. Hysterectomy with bilateral salpingo-oophorectomy and omentectomy were performed, suspecting second tumor-ovarian cancer. Histology and Immunohistochemistry (IHC) confirmed colorectal cancer grade 2 metastases in ovaries, omentum and endometrium.

Patient received 4 courses of irinotecan and mitomycin C chemotherapy from February to May 2015.

The patient visited our clinic in July 2015. BRCA 1,2 mutations were not detected. An IHC study of the ovarian and descending colon tumor confirmed intestinal adenocarcinoma with Her2/neu amplification and no mutations in KRAS, NRAS, BRAF genes. A molecular genetic study found an APC gene mutation and MSI-H. The disease manifestations were tumor lesions in the right colic flexure, small-intestinal mesentery, lesser pelvis adipose tissue, sigmoid colon stump, supradiaphragmatic and celiac lymph nodes. Genetic status of the tumor of the ascending colon at that time was unknown.

Thus, two rare disorders of MSI-H and HER2 amplification were identified in a patient with metastatic disease. The incidence of MSH-H does not exceed 2%-4% and is associated with a significantly poorer prognosis of the disease and less effective chemotherapy including of anti-EGFR agents [5]. In the general population, the detection frequency ratio for right- and left-sided tumors is 4:1; in our case, MSI-H was detected in the descending colon tumor. The frequency of amplification/overexpression of HER2/neu does not exceed 2-3% in the general population. It is more often detected in patients with left-sided localization of the primary tumor and is
associated with a decrease of efficiency and, possibly, resistance to cetuximab/panitumumab [6]. Therefore, the detection of HER2/ neu amplification and MSI-H in the descending colon tumor and ovarian metastasis is a very rare case.

At that time, we did not have any data on the negative impact of HER2/neu-positive status and MSI-H on the effectiveness of anti-EGFR drugs. Taking into account the previous treatment effectiveness, mFOLFOX6+panitumumab regimen was chosen, the treatment was started in August 2015. After 4 cycles on CT scan, there was a decreased mesentery infiltration (stable disease). During cycle 8, the patient developed a hypersensitivity reaction to oxaliplatin (in total 14th infusion of oxaliplatin). CT control in November 2015 showed stable disease (Figure 1). 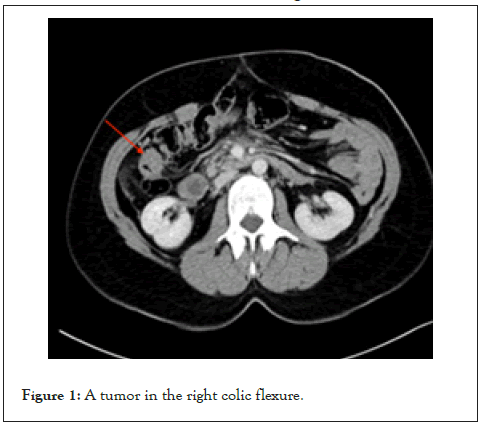 Figure 1: A tumor in the right colic flexure.

The regimen was changed to FOLFIRI+panitumumab, after 3 cycles in January 2016-stable disease. On PET-CT in April 2016 (6 cycles), there was lymph nodes (supradiaphragmatic and celiac) and pelvic metastases decrease; complete resorption of small-intestinal mesentery; ascending colon tumor decrease. A slight increase of the sigmoid colon stump metastasis was regarded as stable disease.

The treatment was continued till June 2016. After 9 cycles of chemotherapy, the maximum effect was achieved and a supportive therapy with Vectibix was started.

Colonoscopy in September 2016 revealed villous polyps up to 2.5 cm in diameter in the rectum and previously described exophytic tumor about 5 cm during the examination through stoma. A biopsy revealed adenocarcinoma. Rectum tumors were removed transanally, and histology showed adenocarcinoma within the mucosal lamina propria.

Considering the long-term control of disease, patient middle- age (41 years) and satisfactory condition (ECOG 0, Karnovsky 100%), hereditary pattern of the disease-colectomy with ileorectoanastamosis formation was done on November 2016. Intraoperatively metastases in the small and large intestinal mesentery have been found. A morphological study of cecum tumor revealed the moderately differentiated adenocarcinoma with focuses of extracellular production of mucus. The tumor invaded the muscularis propria, extending into the pericolonic adipose tissue, with lymphovascular invasion. There were multiple tubular adenomas with focuses of severe dysplasia. Metastases were found in 4 out of 10 lymph nodes.

So far as the volume of the operation was considered nonradical, the chemotherapy FOLFIRI+bevacizumab was started. The lack of anti- EGFR agents forced a decision to change the monoclonal antibody. Chemotherapy started in 3 weeks after surgery (December 2016) with bevacizumab starting from the second cycle. After 4 cycles (CT on February 2017) the disease manifested as a celiac lymph node up to 2x5 cm and a mesentery lymph nodes conglomerate. After 9 courses on CT (May 2017) there was a stable disease. Irinotecan was stopped and maintenance with 5-fluorouracil+leucovorin (46-hour infusions) with bevacizumab was continued (Figure 2). In August 2017 on PET-CT disease, progression was noted: The appearance of metabolically active lesions in mesentery and subcapsular liver metastases with no changes in previously identified lesions.

After 5 courses CT in November 2017 revealed a disease progression as a 27% increase in the size of the liver lesions. Because of the negative results of treatment, it was suggested that these metastases might be coming from different primary colon tumors of various genetic characteristics. According to the available literature, individual patients with FAP and an established mutation in the APC gene might have tumors with different genetic profiles [7] (Figure 3).

Genetic status of the ascending colon tumor was assessed; MSS and mutation of KRAS exon 2 codons 12-13 were detected. A restudy of descending colon tumor and ovarian metastasis shown the absence of KRAS, NRAS, BRAF mutations, HER2/neu amplification and MSI-H. Consequently, metastases could be from two primary tumors with different genetic characteristics.

Based on the previously observed effects, we decided to restart XELOX with desensitization (overcoming the hypersensitivity reaction to oxaliplatin).

After 3 courses in February 2018, there was a stable disease on CT scan. However, after 6 courses progression was established (CT on May 2018): A significant increase of liver metastases and previously detected lymph nodes, the appearance of ascites and multiple peritoneal lesions (Figure 4). 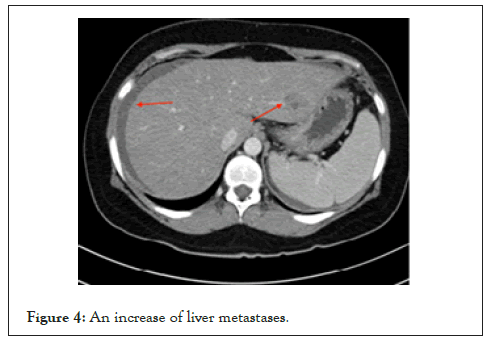 Figure 4: An increase of liver metastases.

It was suggested that the source of these metastases was a tumor located in the left colon, with RAS wild-type and HER2/neu amplification. Access to anti-HER2 agents has been limited. 5 cycles of irinotecan and panitumumab were performed. CT-scan in August 2018 showed ascites regression, partial regression of abdominal and retroperitoneal lymph nodes, multiple peritoneal lesions no longer detected. Liver metastases remained stable. Thus, some of the metastases have been sensitive to irinotecan and anti- EGFR agents, probably originating by the ascending colon tumor.

Nevertheless, after 4 months on CT-scan new liver metastases and more than 20% increase of previously identified lesions (that were “stable” during therapy with panitumumab) were detected (Figure 5). The situation was estimated as the development of resistance to anti-EGFR agents or as the growth of metastases with of HER2/ neu overexpression or KRAS mutation.

The subsequent choice of the therapy was based on the absence of pronounced treatment effects and low probability of achieving disease control in case it is represented by a KRAS-mutated tumor. On the other hand, an attempt to block HER2/neu or immunotherapy seemed to be rational. Considering the satisfactory condition of the patient, the relatively low tumor burden, slow disease development as part of the hereditary syndrome and available medications, the treatment with nivolumab was started.

After 3 courses of nivolumab, the effect was estimated as stable disease. After 6 courses, clinically and according to CT in March 2019, the disease progression in almost all its manifestations was established (Figure 6). 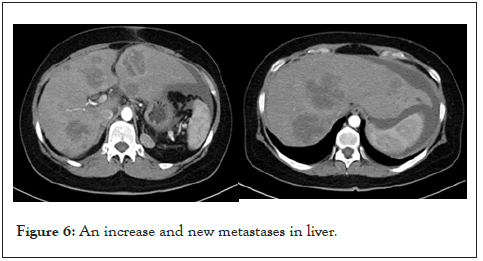 Figure 6: An increase and new metastases in liver.

Treatment was discontinued due to disease progression and general condition deterioration. The patient received symptomatic treatment in local health facilities. According to the information from patient’s relatives, patient died in May 2019 on the background of the brain lesion symptoms (HER2-positive tumor!).

In summary, a patient with initially metastatic multicentric cancer of the ascending and descending colon survived over 5 years and 7 months, which can be considered a good result. Tumors varied significantly in genetic characteristics. So, right-sided localization of the KRAS mutated tumor and the tumor of the descending part with HER2/neu amplification and a MSI-H were negative factors for drug therapy outcome. Positive factors included the absence of visceral metastases during the first four years of treatment. At the same time, the best effects of several lines of treatment were estimated as stable disease. According to treatment response of different metastases, we can assume they had origin from different tumors, though synchronous. In the treatment of metastatic colon cancer associated with FAP, it is necessary to take into consideration than multicentric tumors and/or their metastases can have different molecular genetic characteristics. The choice of drug therapy must be determined by genetic characteristics. We consider repeated biopsies with immuno-genetic analysis to be the most important, especially in cases of hardly predictable treatment outcomes.

Copyright: © 2022 Gutorov SL, et al. This is an open-access article distributed under the terms of the Creative Commons Attribution License, which permits unrestricted use, distribution, and reproduction in any medium, provided the original author and source are credited.