The world's population is expected to reach nearly 9.7 billion by 2050 [1]. This increase in the population leads to an increasing demand for animal protein in general and for fisheries in particular. The supply of the population with fishery resources from the natural environment is increasingly limited due to pollution, climate change, destruction and degradation of habitat by human actions [2,3] and especially overexploitation which threatens nearly 31% of natural stocks [1]. The practice of aquaculture, which continues to grow over the years [4] helps to preserve natural stocks and repopulate continental and marine waters [5]. It is therefore presented as a means of achieving one of the Sustainable Development Goals (SDGs), the aim of which is to ensure a sustainable environment through the preservation and enhancement of biodiversity [6].

In Cameroon, very few endogenous species have undergone a domestication program and they have the advantage of adapting better to environmental conditions. Hence an interest was given to an endogenous fishery resource belonging to the family Clariidae and known as Claria jaensis. The Claridae family is marked by its hardiness, omnivorous diet, rapid growth (3 g/day) correlated with its ability to efficiently process composed feed and it’s much appreciated flesh [7].

The domestication of the still little known species Clarias jaensis, which is the subject of uncontrolled exploitation by farmers for profit and feed purposes [8] could like any other local species, make it possible to support sustainable aquaculture development [2].

This domestication requires a mastery of housing, feed and feeding, health and reproduction techniques. Among these techniques, feed and feeding is the most important because it represents almost 70% of production costs. Also, one of the important aspects of diet is determining nutrient requirements. Among these, energy requirement for physiological stages in Clarias jaensis has been studied [9]. However, up to our knowledge, there are limited or no information on the protein requirement for the growth of Clarias jaensis. Protein requirement study is one of the most important aspects on fish nutrition. Protein provides essential amino acids which are used for tissue repair and growth of the fish [10,11]. Dietary protein has significant importance in aquaculture systems because it represents considerable economic investment and a central factor that determines fish growth so long as other physiological requirements needed for growth are fulfilled [12].

This Study is aimed at contributing to the improvement of fish production by determining nutritional needs of Clarias jaensis.

This study was conducted at the Teaching and Research Farm of the Faculty of Agronomy and Agricultural Sciences of the University of Dschang (UDs). Dschang, a mountainous city, is located west of Cameroon at latitude 5°26’ North, longitude 10°26’ East and at an altitude of 1420 m and an average rainfall of 2000 mm per year.

A total of 360 fingerlings of Clarias jaensis with an average weight of 23 ± 1.8 g obtained from fishermen in the Mbô floodplain, located in the Western region of Cameroon and transported in to the study site were used. Immediately on arrival, fish were acclimatized for two weeks in concrete tanks. During the acclimatization period, a 3A feed based on fishmeal, soybean meal and middling containing 40% of crude protein were given to them until satiety twice daily between 6-8 a.m. and 4-6 p.m.

12 happas of 1 m3 (1 × 1 × 1m) attached to the four sides to Chinese bamboos firmly embedded in a 100 m2 pond, of average depth 0.90 m and supplied with water from a water dam located at 150 m distance were used. The pond was equipped with a 5 cm diameter water supply pipe with an average water flow rate of 0.14 m3/s and a 10 cm diameter PVC overflow pipe with an average flow rate of 0.14 m3/s so as to maintain a water height of 0.80 m. Each happa was also equipped with a circular floating frame 30 cm in diameter placed on its surface and vertically there was placed a 33 cm diameter basin located 0.70 m away to collect uneaten feed.

Four isoenergetic experimental diets (Table 1) were formulated with different protein levels, namely 30%, 35%, 40% and 45%. Each diet was made from ingredients previously ground, homogenized manually and wetted with drilling water (0.8-1 liter for 5 kg of feed) so as to obtain a homogeneous paste, then granulated using a chopping machine with a sieve mesh diameter of 0.2-0.4 cm. The granules obtained were then dried in an electric dryer at 45°C. for 48 hours and stored in labeled plastic bottles. The Chemical composition of crude protein and metabolisable energy of different diet were obtained by AOAC (2000) method [13].

Conduct of the test and data collected

Feed was distributed twice a day (8 am and 6 pm) at 3% of the ichtyobiomasse. Each month, a biometrical monitoring was conducted in each group using a 0.1 g precision electronic scale (OHAUS) an icthyometer to evaluate growth characteristics and adjust the amount of feed given. Uneaten feed were collected weekly, sun-dried and weighed to estimate feed intake. The physicochemical parameters of the water (temperature, dissolved oxygen, pH) were measured weekly and recorded in Table 2.

Table 2: Physicochemical parameters of the water during the study.

Growth characteristics and cost of production

The cost of a kg of feed was calculated based on the price of each ingredient as practiced in the local market.

The cost of feed consumed was obtained by multiplying the average feed intake by the price of a kg of the corresponding diet. Price per kilogram of feed (PFC): PFC = Σ (Xi × Px); Xi = Quantity of ingredient (i) in (Kg); Px = Price of the ingredient (i) in FCFA.

The cost of production of a kg of live body weight was calculated by multiplying the cost of a kg of feed by the corresponding feed conversion ratio: Price of kilogram of feed consumed (PFC): FCP= FCR × PFC; FCR = Feed Conversion ratio.

One-way ANOVA was used to test the effect of protein level on survival and growth characteristics. When there were significant differences between the means, they were separated by Duncan's test at 5% significance level. SPSS 20.0 statistical software was used for these analyzes. 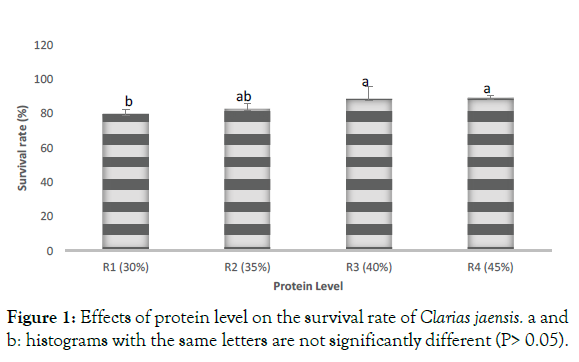 Figure 1: Effects of protein level on the survival rate of Clarias jaensis. a and b: histograms with the same letters are not significantly different (P> 0.05).

The effects of graded level of crude protein on the growth characteristics and the feed production costs of Clarias jaensis fingerlings are presented in Table 3 and illustrated by Figures 2-4. In general, it appears that with the exception of the feed conversion ratio, growth performance increased significantly with the increasing level of protein in the diets. The level of protein in the diet did not have a significant effect on feed consumption.

Figure 2: Monthly evolution of the total length of Clarias jaensis juveniles as a function of the protein level. 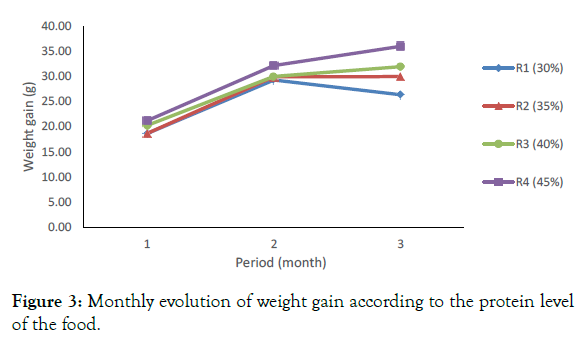 Figure 3: Monthly evolution of weight gain according to the protein level of the food.

Figure 4: Monthly evolution of the condition factor K as a function of the protein level of the food.

The monthly weight curve illustrated in Figure 2 shows the same trend, and the same profile. However, from month 2, the weight of the fish fed with the ration R4 (45% of protein) is above the other weights followed by that of R3 (40% of protein) and R2 (35% of protein) and the lowest curve is that of fish receiving the ration containing 30% protein in the feed

Total length: Whatever the protein level considered, no significant effect (P <0.05) was observed on the total lengths of the fish although the highest (24.99 ± 0.98) was observed with the ration containing the lowest protein level and the lowest (22.74 ± 1.67) was recorded with the 45% protein ration (Table 3). In addition, we noted the same pace, the same trend and the same profile in the monthly evolution of this length (Figure 2).

Specific Growth Rate (SGR): The specific growth rate increased with increasing protein levels. It was highest with the R4 ration (45%) followed by the 40% protein ration and the lowest value was obtained with the 30% and 35% protein rations respectively.

Protein level in the feed had no effect on feed intake. These results are similar to those of [15] but differ from those of [16,14] obtained respectively with the fingerlings of catfish Horabagrus brachysoma and Clarias macrocephalus. The observed difference may be due to the methodology used (feed formulation), the species as well as the breeding environment.

In this study, the protein level affected significantly weight, weight gain, Daily weight gain, specific growth rate and condition factor K which tended to increase with increasing rate of protein in the feed. Of all these characteristics, the values obtained with the 30% protein ration were the lowest, followed by the 35% protein ration. The best results were recorded with 45% protein in the feed.

These results are different from those of [15-18] in whom the best weights, Weight gain, specific growth rates were recorded with protein levels of 42.5%, in Clarias gariepinus, 40% in Silurus asotus, and 35% in Horobagrus brachysoma and Clarias gariepinus. Insufficient protein content in feed induces poor weight gain due to insufficient supply of amino acids necessary for tissue production [19].

The ADG varied from 0.83 ± 0.06 for fish fed the feed with 30% protein to 0.99 ± 0.05 for fish fed the feed with 45% protein. This ADG is close to 0.90 ± 0.10 and 1.01 ± 0.16 obtained by Tsoupou KSG [9] in determining the energy requirements for the same species. In general, in other claridae, the ADG is around 3 g/day, a difference of around 2 g when compared with our results. This difference could be due to environmental conditions. Indeed, Warm temperatures of 25 to 32°C accelerate metabolism and stimulate growth in fish [20]. Conversely, cold temperatures slow down metabolism and therefore growth.

The protein efficiency ratio has tended to increase with the growing level of supplemental protein. These results are similar to those of [14] the effectiveness of proteins is high in low protein feeds because fish will maximize the use of the protein source for making body tissues. The same trend has also been recorded at Oreochromis niloticus in whom the use of feed proteins has decreased from 2.35 to 1.58 at the fry stage and from 1.92 to 1.19 at fingerlings stage and from 1.53 to 0.99 at the growth Stage [21].

[22] Reported that fish often have their best growth when they are fed with concentrations of feed proteins lower than those producing maximum growth and the lowest feed conversion ratio.

With the exception of feed intake and survival rate, growth characteristics and cost of production were significantly affected by the level of protein in the feed. The best body weight, weight gain, average daily gain, specific growth rate, consumption index and K condition factor were obtained with the feed containing the highest protein level. This ration was also one of the least economical.

The results of this study suggest that the protein requirement for maximum growth and of Clarias jaensis fingerlings may be 45%.

Copyright: © 2021 Komguep NR, et al. This is an open access article distributed under the term of the Creative Commons Attribution License, which permits unrestricted use, distribution, and reproduction in any medium, provided the original work is properly cited.