Exclusive breastfeeding granting to infants aged <6 months of globally reported less than 40%. Nationwide coverage breastfeeding for infants up to age 6 months fluctuated, i.e. 24.3% in 2008, then increased in 2009 to 34.3%, and decreased in 2010 to 33.6% [1]. Globally there has been a general decline in the practice of breastfeeding both of the amount and duration of the last few decades. Possible reasons for refusing to breastfeed, including a lack of trust that children get enough, increase the mother’s work, the load demand which makes them to be separated from their babies for longer hours, decreased social support, discomfort in the breast-feeding in public, and the promotion of intense of commercial infant formula.

Based on the background, the researchers want to investigate about “Effects of Nutrition Counselling on breastfeeding knowledge and attitudes about giving exclusive breast milk and infant nutritional status in the Region District Health Clinics Lubuk, Pakam.

The study design is quasi-experimental with non-equivalent control group design. In the treatment group nutritional counselling, and attitudes and knowledge measured by a questionnaire. In the control group was not given nutritional counselling intervention. Research conducted at the sub-district Puskesmas, Lubuk, Pakam and sub-district Puskesmas, Tanjung, Morawa. The overall data collection was conducted in March 2016 to August 2016.

The population in this study are all mothers with babies 0 months to 3 months and breastfeeding exclusively living in sub-district Puskesmas Lubuk Pakam as the intervention group and sub-district Puskesmas, Tanjung, Morawa. The subjects of the study were taken with inclusion criteria are the mother did not work until 3 months postpartum, the baby who got exclusive breastfeeding, the baby born did not have the defect or congenital defect, agreed to be the respondent. While exclusion criteria are not willing to follow Early Breastfeeding Initiation (IMD) during labor, infant or postpartum suffer severe illness. The number of samples were 60 mothers divided into 2 groups: those who received intensive nutrition counselling were 30 mothers and control group who did not get nutrition counselling as many as 30 people sampling was done by screening in accordance with the criteria inclusion, respectively in the two groups were 30.

Counselling in the intervention group conducted after the sample has been prepared and fills out the form identity data. After that the sample pre-test questionnaires filling in the form of knowledge and attitude questions respectively amounted to 20 grains. Counselling is divided into three sessions. Intensive counselling session I made on day 1 through day 7. Session 2 reinforcement sessions and counselling is performed on days 8 to 14 of this session aims at strengthening on what the mother knew of researchers appropriate recommendations. Session 3 is an independent practice session conducted on 15 days to 28 days, mothers are given the opportunity to practice independently of the instruction is recommended. At this session the target is no longer visit except on days of 28 counsellors will be doing an assessment of the output counselling. Rate output in the form of counselling, post-test this is done to see if there are differences in knowledge and attitudes of nursing mothers after being given nutritional counselling.

Characteristics of the study subjects

Table 1: Characteristics of the studied form of age, occupation, education and nursing mothers.

Table 2: Distribution of average score breastfeeding knowledge and attitude granted before and after intervention in two groups.

Comparison of Knowledge and Attitudes in the Second Group Knowledge

After being given the intervention, the mean score of knowledge in the treatment group and the control group amounted to 89.93 74.50. Differences between the mean knowledge score after intervention in both groups differed significantly (p<0.05) (Table 3).

Table 3: Distribution comparison of knowledge on second group scores before and after intervention.

Table 4: Distribution comparison of scores on the second group attitude before and after intervention. 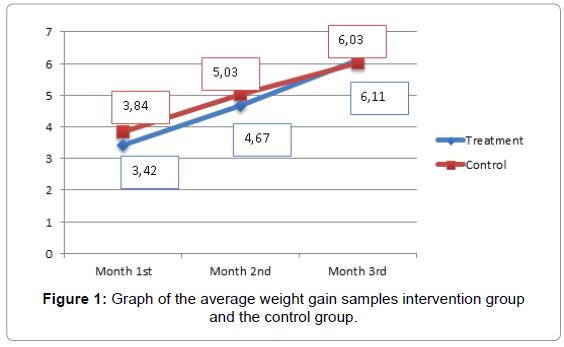 The level of knowledge

Question and pre-test knowledge by researchers who immediately gave questions to the baby’s mother, after the researchers gave an explanation of the agreement to conduct nutritional counselling by visiting a sample home, this activity provided more intensive counselling. Samples that meet the inclusion criteria and approve activities to be carried out first to sign a consent form as proof of the willingness of information and media samples.

Counselling activity began with intensive sessions (7 days), and then the reinforcement (2 visits) performed on day 8 and day 14. In the practice sessions are no longer visited independent samples, the samples are given the opportunity to practice independently instructions given on exclusive breastfeeding counselling exclusively. Counselling is done directly by the researcher who was accompanied by skilled cadres Posyandu. Implementation of counselling is done by using a flip chart display, exclusive breastfeeding materials, discussions, as well as material on the attachment of the correct feeding position. At the beginning of counselling sample averages are still not sure about the correct position of the attachment of breastfeeding and still do not understand the significance of giving exclusive breast milk.

In the treatment group the average knowledge before and after an increase (9.00 point), this increase was statistically significant (p=0.000). This study is in line with research Ambarwati, et al. in Semarang showed that the women who received intensive counselling had a higher level of knowledge than mothers who got regular counselling from midwife. Improved knowledge due to the treatment of nutritional education. Education with counselling methods that put mothers as subjects rather than as objects would put a great interest for counselling, it motivates the mother to find out more about the definition and benefits of early initiation of breastfeeding, breast care, feeding position and latch the baby, insufficient breastfeeding, benefits expressing milk, how to express the milk, storage and presentation of breast milk way, the dangers of formula [8]. Notoatmodjo say that health education can be done in various ways, namely education, training, counselling, consultation and through the media, all five of these methods has advantages and disadvantages [9].

The average knowledge in both groups (Table 4) before being given the intervention were not statistically different (p=0.290), after the intervention given an average knowledge statistically different (p=0.000). This study is in line with research Taufiqurahman, et al. after being given counselling assistance to mothers of babies 0-6 months in the group given the intervention and the control group there were significant differences (p=0.000) [10]. After being given treatment interventions to increase knowledge, padakelompok by 9.0 points, while the control group decreased to 2.7 point. Research Fikawati states that increased exclusive breastfeeding knowledge is one of the key success factors in the granting of exclusive breastfeeding [11].

The resulting scores in both groups before the intervention there were 16 samples with a good attitude category, it is judged on the application of behavioural mothers do. However, after the intervention group were counselled on score changes can be seen by 30% of samples. The increase in the total score is also based counselling has been given and then the sample was asked to independently practice exclusive breastfeeding. Application of the results of the counselling attitude can also be seen from the sample gives an exclusive breastfeeding baby or formula feeding. At the time of the study, researchers found that there are samples that give milk, accompanied by milk formula. This is because the sample is a working mom and admitted it is difficult to divide time between work and breastfeeding.

Attitudes cannot be seen, but can be interpreted in advance of behaviours that are closed. Attitudes are emotional reactions to social stimuli. According to Newcomb attitude is a readiness or willingness to act, which predisposes the action of behaviour, not the implementation of a particular motif. Attitude is a readiness to react to certain objects in the environment as an appreciation of the object [9]. Attitudes may change if given konselingan assistance to mothers, so that behaviour can provide exclusive breastfeeding [13].

Exclusive breastfeeding granting exclusive in both groups more in the treatment group amounted to 83.3% and in the control group by 53.3%, Research Ochola et al. states to strengthen mother gave exclusive breastfeeding need for intensive counselling at home, the research group receiving intensive counselling exclusively breastfed as much as 89%, while the group receiving semi intensive as much as 87% [6].

In the intervention group and the control group there are differences in weight gain every month. Differences in weight gain both groups are not too far away, the first month of the average increase in the intervention group of 1.25 kg and in the second at 1.44 kg, while the control group the average weight gain in the first month of 1.19 kg and the second month of 1 kg. The increase in infant weight in the treatment groups are still in the stage of normal, as well as research Hunsberger et al. that exclusive breastfeeding is a protective factor for overweight in infants [14]. When seen in infant growth period is what determines the success to provide nutrition to infants. While Khamzah reported normal growth patterns among infants fed breast milk with formula milk at 4 months to 6 months of age, babies fed formula gained weight which tends to be faster than breast-fed babies. After the first 6 months, breast-fed infants tend to be slimmer than the formula-fed infants [15]. Research conducted Saadia Ijaz et al. said the baby was a normal growth of about 17.6% do not get exclusive breast milk while the baby is growing abnormally not get exclusive breastfeeding much as 37.5% [16]. The growth of Exclusive breast-fed infants is normal, because the content of the nutrients found in breast milk has been meeting the needs of babies up to the age of 6 months [17].

Copyright: Â© 2017 Masthalina H, et al. This is an open-access article distributed under the terms of the Creative Commons Attribution License, which permits unrestricted use, distribution, and reproduction in any medium, provided the original author and source are credited.