In this study, we found that BVI03 an alkaloid compound isolated from B. virgate induced antiproliferation against the human cervix carcinoma cell line HeLa. A MTT assay indicated that BVI03 had a strong tumor inhibition (IC50=0.126 μg/mL), which was superior to that of tamoxifen (IC50=2.879 μg/mL). This study also investigated the mechanism of antiproliferation induced by BVI03. Enzymatic activity using a colorimetric assay kit was performed to determine work mechanism of BVI03. Our data indicate that p53 and caspase-3 are involved in the process of BVI03-induced antiproliferative in HeLa cell compare with untreated HeLa cells.

Treatment of cancer has drawn the attention and interest of researchers due to their great impact on the population’s health. Two to 3% of deaths recorded worldwide annually arise from different types of cancer. The Boehmeria virgata Leaf have been widely used in Traditional Makassar Medicine to treat cancer [1]. B. virgata plant is classified in the Family Urticaceae [2].

In the previous study, we extracted and isolated B. virgata and showed its antiproliferative activity against HeLa cell line [3,4]. We now report the alkaloid active compound using a MTT-assay guided isolation and identified the positive spots using TLC and spectrophotometer ultraviolet and infrared.

The tumor suppressor protein p53 is a principal factor in regulation of growth arrest as well as apoptosis [5]. Many apoptotic signals are mediated to the cell death machinery via p53 [6]. It interacts with other proteins or functions as a transcription factor [7,8]. Indeed, in reponse to various types of stress, p53 becomes activated and, as a consequence, cells can undergo marked phenotype changes, ranging from increased DNA repair to senescence and apoptosis [9,10].

Apoptosis is characterized by chromatin condensation and DNA fragmentation, and is mediated by the cysteine protease family called caspases. Among them, caspase-1 and -3 have been shown to play a pivotal role in the apoptotic pathway that leads to chromosomal DNA fragmentation [11,12].

Mitochondria are involved in a variety of key events, including release of caspase activators, changes in electron transport, loss of mitochondrial membrane and participation of both pro- and antiapoptotic Bcl-2 family proteins [13-15].

B. virgata (Forst) Guill leaf were collected from Malino (South Sulawesi, Makassar, Indonesia) in the month of March. The plant was identified and authenticated. Fresh plant leaves were shade dried at room temperature, ground into fine powder, and then extracted (amount 1200 g) with solvents of methanol, hexane, n-buthanol and ethyl acetate. The extracts were concentrated under reduced pressure using a rotary evaporator to constant weight. The extracts were collected and preserved in a desiccators until used for further studies.

Table 1: Efects of BVI03 on the cellular viability of HeLa cells. 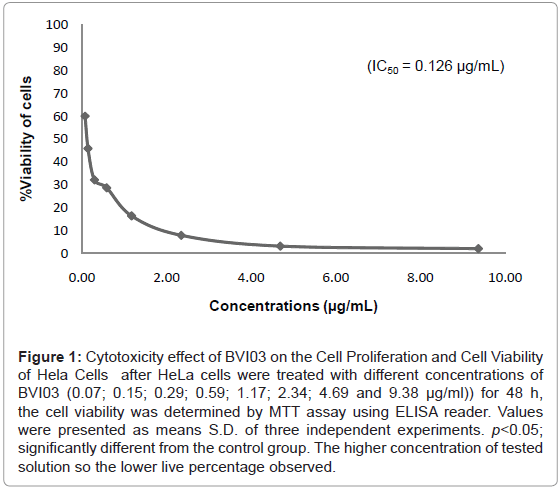 Figure 1: Cytotoxicity effect of BVI03 on the Cell Proliferation and Cell Viability of Hela Cells after HeLa cells were treated with different concentrations of BVI03 (0.07; 0.15; 0.29; 0.59; 1.17; 2.34; 4.69 and 9.38 µg/ml)) for 48 h, the cell viability was determined by MTT assay using ELISA reader. Values were presented as means S.D. of three independent experiments. p<0.05; significantly different from the control group. The higher concentration of tested solution so the lower live percentage observed.

The antiproliferative activity assay of BVI03 compound was measured using MTT {3-(4,5-dimethylthiazol-2-yl)-2,5- diphenyltetrazolium bromide} assay (Sigma). The assay detects the reduction of MTT by mitochondrial dehydrogenase to blue formazan product, which reflects the normal function of mitochondria and cell viability. Exponentially growing cells were washed and seeded at 1×104 cells/well for HeLa cell line (in 200 µl of growth medium) in 96 well microplates (Nunc, Roskilde Denmark). After 24 h incubation, a partial monolayer was formed then the media was removed and 200 µl of the medium containing the compound (iniatially dissolved in DMSO) were added and re-incubated for 48 h. Then 100 µl of the medium were aspirated and 15 µl of the MTT solution were added to the remaining medium (100 µl) in each well. After 4 h contact with the MTT solution, blue crystals were formed. One 100 µl of the stop solution were added and incubated further for 1 h.

Reduced MTT was assayed at 550 nm using a microplate reader (Biorad). Control groups received the same amount of DMSO (0.1%). Untreated cells were used as a negative control, while cells were treated with tamoxifen as a positive control. Eight concentrations (125, 62.5, 31.25, 15.63, 7.81, 3.91 and 1.95 µg/ml) were prepared from each compound and tested against the HeLa cell line (Table 2). IC50 values were calculated as the concentrations that show 50% inhibition of proliferation on tested cell line. Stock solutions of the compounds were dissolved in DMSO then diluted with the medium and sterilized using 0.2 µm membrane filters. The final dilution of the compound used for treating the cells contained not more than 0.1% (non-toxic concentration) DMSO. IC50 values were reported as the average of three replicates. The antiproliferative effect of the tested compounds was determined by comparing the optical density of the treated cells against the optical density of the control (Figure 2).

Table 2: Effects of tamoxifen on the cellular viability of HeLa cells. 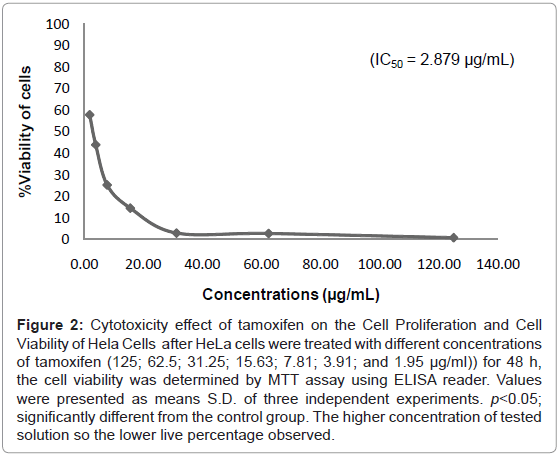 Figure 2: Cytotoxicity effect of tamoxifen on the Cell Proliferation and Cell Viability of Hela Cells after HeLa cells were treated with different concentrations of tamoxifen (125; 62.5; 31.25; 15.63; 7.81; 3.91; and 1.95 µg/ml)) for 48 h, the cell viability was determined by MTT assay using ELISA reader. Values were presented as means S.D. of three independent experiments. p<0.05; significantly different from the control group. The higher concentration of tested solution so the lower live percentage observed.

The cell viability (% of control) was calculated by the following equation:

The enzymatic activity was assayed using a colorimetric assay kit according to the manufacturer’s protocol. Briefly, 5×106 cells were resuspended in 1 ml of Extraction Buffer. Incubate it for 2 hours at room temperature with gentle shaking. Transfer extracts to microcentrifuge tubes and centrifuge at 1000×g for 15 minutes. Aliquot cleared lysate to clean microfuge tubes. Lysates were than stored at -80°C and assayed at a later time. Each well was added with 100 µl of standard, sample and control per well, and incubated at room temperature for 2 hours. Aspirate each well and wash, repeating the process four times for a total of five washes by filling each well with 400 µL of Wash Buffer. Add 100 µL of active Caspase-3 Conjugate to each well and Incubate for 1 hour at room temperature, than repeat the aspiration/wash. Add 100 µL of Substrate Solution (TMB) to each well. Incubate for 30 minutes at room temperature. Add 100 µL of Stop Solution to each well. Gently tap the plate to ensure thorough mixing. Determine the optical density of each well within 30 minutes, using a microplate reader set to 450 nm. (Figure 3) The absorbance of both samples and the caspase-3 standards was determined (Table 3). 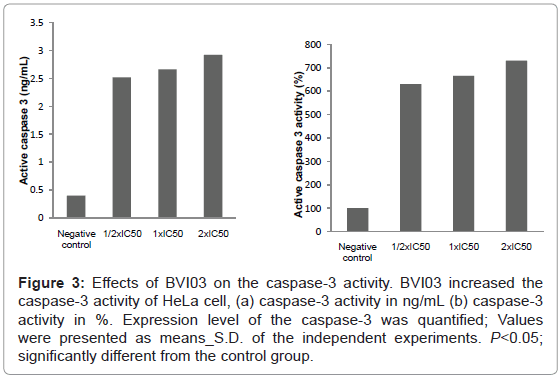 Table 3: Concentration of active caspase-3 was detected as ng/mL in HeLa cells lysates. 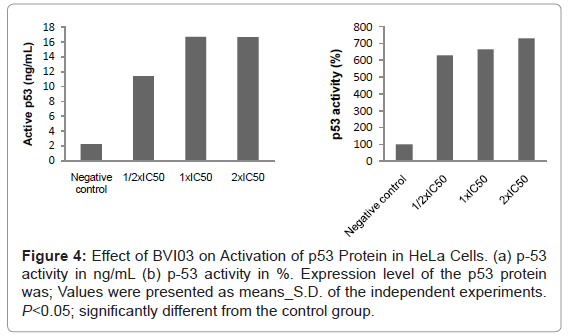 Figure 4: Effect of BVI03 on Activation of p53 Protein in HeLa Cells. (a) p-53 activity in ng/mL (b) p-53 activity in %. Expression level of the p53 protein was; Values were presented as means_S.D. of the independent experiments. P<0.05; significantly different from the control group.

The significance of the difference between the treated and untreated groups was determined with the Student’s t-test. The results are presented as mean S.D. of three independent experiments. The differences were considered significant at p<0.05.

From phytochemical study we found that B. virgata leaf contain secondary metabolit such as alkaloid, terpenoid (steroid) and saponin, but negative to flavonoid and tannin. Since BVI03 was found to be the active compound of B. virgata leaf, preliminary tests were carried out to establish its structure. BVI03 is not dissolved in water, but dissolved in chloroform, dichlormethane, ethyl acetate and methanol. The UV spectrum showed an absorption band at 262, 268 and 369 nm, suggesting the presence of conjugated diena. Moreover, spectrum UV showed maximum absorption at 285 nm, suggesting transition from n to p* in the area of wavelength more than 270 nm. The IR spectrum indicated absorption at 3745, 3649 cm-1 showed the presence of free OH-group, whereas, absoprtion at 3366 cm-1 and also at 1173 and 1138 cm-1 showed the presence of amina group. Absorption at 1669 and 1606 cm-1 identified alkena group. Bands at 1600-1500 cm-1 identified the presence of aromatic ring. Whereas, monosubstitution aromatic was showed at 734 and 699 cm-1. The presence of band, that strong absorbed at 1253 cm-1, identified ether aromatic group.

Effect of BVI03 on cell viability of HeLa cells

Cell viability was measured using MTT assay. The viable cell number/well is directly proportional to the production of formazan, which is able to be dissolved in DMSO. After HeLa cells were incubated with indicated concentrations of BVI03 (at 0.07; 0.15; 0.29; 0.59; 1.17; 2.34; 4.69 and 9.38 µg/ml) for 48 h, cell viability significantly reduced (Figure 1). The IC50 value of 50% cell survived by BVI03 was about 0.126 µg/ml. BVI03 shows cytotoxic and antiproliferative effects on HeLa cells as positive control we used tamoxifen with IC50 value was 2.88 µg/ml.

Caspases are the central executioners of apoptosis mediated by various inducers. Caspases are synthesized as proenzymes that are activated by cleavage. Caspases-2, -8, -9 and -10 are termed apical caspases and are usually the first to be stimulated in the apoptotic process. Their activation in turn leads to their activation of effector caspases, in particular caspase-3 [11]. We have measured caspase-3 activity directly in the BVI03 induced apoptosis of HeLa cells. Caspase-3 activity is expressed as % activity in compare with untreated sample. Caspase-3 activity was clearly activated in BVI03-induced apoptosis. The amount of % activity was 2.66, which was 6.65 times higher than that released using lysates from untreated HeLa cells. The significantly higher caspase-3 activity in BVI03-treated samples was reproduced in three independent assays. (Table 4) shows the result of one representative experiment.

Table 4: Concentration of active p-53 was detected as ng/mL in HeLa cells lysates.

We next examined the signaling pathways involved in BVI03- induced apoptosis of HeLa cells. Since pro-apoptotic protein p53 plays a crucial role in apoptosis and cell cycle arrest at G1 phase, we determined the effect of BVI03 on the protein level of p53 in HeLa cells. The expression of p53 protein gradually increased during the period of treatment of BVI03.

We gratefully thank to DP2M DIKTI (Directorate of Higher Education) Ministry of Education, Indonersia through “Hibah Strategi Nasional” Research Grant 2012 for financial support in the study.

Copyright: © 2013 Manggau M, et al. This is an open-access article distributed under the terms of the Creative Commons Attribution License, which permits unrestricted use, distribution, and reproduction in any medium, provided the original author and source are credited.