Anomalous left vertebral arteries are uncommon occurring in roughly 4% of the population. Typically of no clinical consequence, they become very important in the context of endovascular repair of an arch aneurysm with Zone II coverage, requiring a deliberate strategy tailored to the anatomy. We describe three cases of aortic arch aneurysms with an anomalous vertebral artery, and discuss the different approaches available depending upon the anatomy.

The left vertebral artery (LVA) provides a significant contribution to cerebral and spinal perfusion. An anomalous origin of the LVA originating from the aortic arch occurs in about 4% of the population [1]. Usually an asymptomatic and incidental finding, the anomalous LVA (ALVA) becomes significant when considering repair of distal aortic arch aneurysms. Historically, these repairs have required an open approach via sternotomy or thoracotomy, aortic replacement and reimplantation or a hybrid approach with aortic debranching followed by post-operative stenting [2,3]. If approached endovascularly, the Left Subclavian Artery (LSA), and as in these cases, the

ALVA must be thoughtfully addressed. Guidelines provided by the Society for Vascular Surgery recommend re-implantation of the LSA in conjunction with endovascular stent-graft coverage. Because it is an anomaly, there are no specific guidelines for the LVA off the aortic arch [4]. This paper presents a series of three cases representing our approach to zone II coverage in the context of an ALVA.

A 41 year old female s/p coarctation repair at the age of 7 and again at the age of 25 presented with recurring episodes of back and chest pain. Her angiogram (Figure 1) and Computed Tomography Angiogram (CTA) demonstrated contained dehiscence of the proximal suture line (Figure 2), as well as an ALVA just proximal to the aneurysm. Intravascular Ultrasound (IVUS) confirmed the contained dehiscence as well as identified the ALVA to be large with an orifice of 7 mm (Figure 3). Cerebral angiogram demonstrated inadequate collateral flow from left to right vertebral arteries. Proximal sealing required coverage of the LSCA and the ALVA. Given the large nature of the LVA and inadequate collateralization, we first performed a left carotid subclavian bypass with re-implantation of the ALVA onto the bypass graft (Figures 4 and 5). We then waited two days to place the endograft. Both procedures were performed without complication and the patient was sent home on post-operative day 3 without complication. 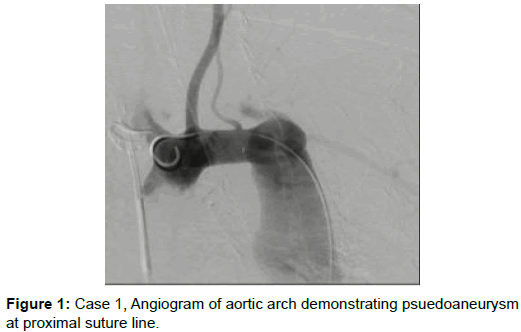 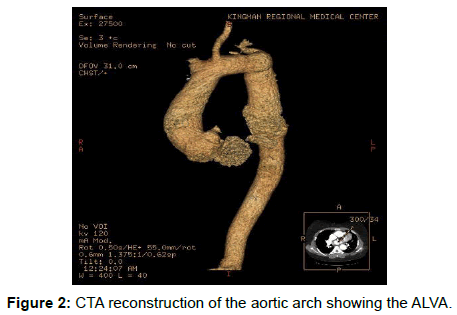 Figure 2: CTA reconstruction of the aortic arch showing the ALVA. A 76 year old male, status post thoracic endovascular aneurysm repair presented with acute onset of chest pressure and chest pain. After ruling out for a myocardial infarction, a CTA of the chest showed a large penetrating ulcer (Figure 6) on the inner curvature of the aortic arch at the level of the LSA. Endovascular coverage of the ulcer required coverage of both the LSA and ALVA. The ALVA was large and likely dominant requiring preservation. We therefore performed a left carotid subclavian bypass with re-implantation of the LVA onto the bypass graft (Figure 7) with deployment of the stent graft during the same procedure. The patient had no neurologic events, tolerated the procedure well and was discharged home on POD# 3. A 68 yo male had previously undergone a thoracic endograft for a penetrating ulcer of the mid distal descending thoracic aorta. The patient had a bovine arch and presented with a residual saccular aneurysm at the takeoff of the LSA, and an ALVA originating at the proximal end of the saccular aneurysm (Figure 8). In this case the ALVA was diminuitive with adequate collateral flow. We opted to use a Snorkel technique for the LSA by first deploying a VIABAHN stent into the LSA from a Brachial approach with its tip down into the descending thoracic aorta. We then deployed a thoracic stent graft covering the aneurysm, the LSA and the ALVA.

All cases described above resulted in excellent seal of the aneurysm with no neurologic events or other complications.

In all three cases, adequate seal zones required the coverage of both the LSA and the ALVA. The decision to re-implant or not hinges primarily on the size and dominance of the vertebral artery in question and whether or not there is an intact circle of willis and adequate collateralization. In the first two cases, the large size and clear dominance of the ALVA over the Right Vertebral Artery (RVA) with no clear crossover perfusion made a clear case for reimplantation. In the third case, the diminutive size of the ALVA in comparison to the RVA, made us less concerned about its coverage. This was the basis for the decision to sacrifice the LVA by coverage with the stent-graft. It is well documented that coverage of the LSA without revascularizations can increase the risk of major complications such as stroke, spinal cord ischemia, arm ischemia and vertebrobasilar ischemia [5]. In two separately reported cases documenting aortic stent-grafting of a patient with an ALVA, both teams elected for ALVA to CCA bypass [2,3]. Moss et al. pointed out that their team performs preoperative magnetic resonance imaging in all patients with aortic arch aneurysms, and this guides the decision making on how to deal with the vertebral vessels.

In our first two cases, the most challenging portion of the procedure is perhaps finding the ALVA. Through the supraclavicular incision made for the CCA-LSA bypass, the jugular vein and left CCA are retracted medially while retracting the strap muscles laterally. The course of the ALVA is posterior to the left CCA. In both cases it was found to be intimately connected with the stellate ganglion proximally, and in both cases persistence in posterior dissection along with manual palpation as well as doppler interrogation were helpful in identifying it. Structures at risk of damage during this dissection include the vagus nerve, the phrenic nerve and the stellate ganglion.

Whether to do the bypass/re-implantation and thoracic endograft in the same setting or to divide them up is up to the operator. In the first case we chose to separate the two procedure by two days, in the second case, we did them both in the same setting. Both had good outcomes. The theoretical advantage of dividing the cases is to ensure adequate functioning of the bypasses and no neurologic defect prior to continuing on with vessel coverage. In the first case we ligated the proximal subclavian at the time of bypass, but leaving it open with placement of coils via the brachial artery at the time of stenting is also an option.

If zone II coverage of the LSA and an ALVA is required, careful attention to the size and dominance of the ALVA should be paid. Likewise crossover flow via the circle of willis would ideally be demonstrated if coverage without revascularization of a large ALVA is entertained. Our practice is to re-implant the ALVA onto the CCA-LCA bypass, and although not commonly done, can be safely and effectively performed in either a stepwise fashion or in the same setting.

Copyright: © 2014 Shults CC, et al. This is an open-access article distributed under the terms of the Creative Commons Attribution License, which permits unrestricted use, distribution, and reproduction in any medium, provided the original author and source are credited.