Wirsungorrhage due to Splenic Artery Aneurysm: Not a Chance Finding

Wirsungorrhage is a rare cause of hematochezia caused by a bleeding source in the pancreas, pancreatic duct or structures adjacent to it, such as the splenic artery that bleed into the pancreatic duct and thence to duodenum. We report a case of 38 year old male presenting with hypovolemic shock and fresh bleeding per rectum (hematochezia) secondary to splenic artery aneurysm diagnosed on the basis of computed tomography (CT) Angiography. In this case report we have highlighted the importance of angiography, when cause of gastrointestinal bleeding is not detectable by endoscopy.

Splenic artery aneurysms (SAAs) are among the common visceral aneurysm accounting for about 60% in the reported series, mostly detected in asymptomatic patients on routine examination for other problems [1]. Symptomatic presentation includes chronic abdominal pain and rarely haemorrhagic shock due to acute rupture in the peritoneal cavity. Most of the complications are due to invasion and so communication with nearby structures, when they are associated with pre-existing pancreatic disease. Upper gastrointestinal bleed occurs due to rupture of aneurysm in to the stomach or pancreas and lower gastrointestinal bleeding due to rupture in to the colon. Only few cases have been reported in the literature [2,3]. We report a case of splenic artery aneurysm in acute on chronic pancreatitis patients presenting with fresh bleeding per rectum well managed with conservative embolization.

A 38 years old patient from rural Wardha in Maharashtra presented to this hospital in emergency ward with fresh bleeding per rectum. He gives a history of loose motion and abdominal pain since last 2 days. He denied any history of systemic disease like diabetes mellitus, hypertension or ischemic heart disease, as well as drug intake of Aspirin or analgesics. There was no history of abdominal trauma. He gives a history of taking alcohol (around 300 mL) daily for the last eight years, but stopped since last 6 months. On general examination, his body mass index was 21 and blood pressure of 90/70 millimetre of mercury with heart rate of 110 beat per minute regular. His respiratory rate was 18, and oxygen saturation was 100% on room air. On systemic examination, abdomen was tender in the periumbilical region without any sign of peritonitis. Per rectal examination was normal except dark blood on the glove without clots. On examination, there was mild pallor, no lymphadenopathy and no hepatosplenomegaly. There was no evidence of fluid in the abdomen. His routine investigation like hemoglobin was 8 g%, total leukocyte count 9,400/cmm, ESR 26 mm in lst hour, fasting blood sugar level 102 mg%. His liver function tests, kidney function test, electrolytes, serum amylase (206 iu/L) and lipase (54 iu/L) were marginally raised. His prothrombin time (14.8) and international normalised ratio was 1.18. Abdominal ultrasonography revealed slight oedematous pancreas with calcification.

The patient was managed with intravenous fluid replacement, four units of packed red cells, and injection ethamsylate. His upper gastrointestinal endoscopy was normal. A flexible sigmoidoscopy was performed which showed fresh blood and clots seen throughout the sigmoid colon. The patient continued to report bleeding. Following this computed tomography (CT) angiography was planned which showed a splenic artery aneurysm with surrounding hematoma and bulky pancreas with few calcifications (Figures 1 and 2).

Intervention Radiology consults was obtained and the aneurysm was embolised via catheter directed metallic micro coils (MWCE 18- 14-6 & 18-14-6 nester two coils (Figure 3). Rectal bleeding was stopped and there were no complications. The patient recovered well and was discharged. We lost follow-up of the patients. 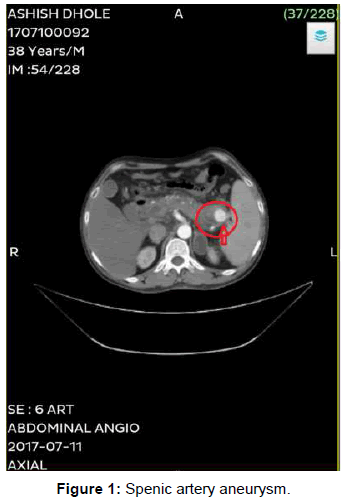 Wirsungorrhage also known as Hemosuccus pancreaticus or pseudohematobilia is a rare cause of bleeding per rectum caused by a bleeding source in the pancreas, pancreatic duct or adjacent structures, such as the splenic artery either as aneurysm or pseudoaneurysm that may bleed into the pancreatic duct thence to the small intestine [2]. Pseudoaneurysms are complications of pancreatitis where a pseudocyst is formed, with one wall abutting an artery, usually the splenic artery. SAA is defined when there is ≥ 1 cm dilatation of the artery diameter. It may be true or pseudoaneurysm, in which true aneurysms are more common (72%) [4]. Risk factors of SAAs are Pregnancy, portal hypertension, liver transplant, and pancreatitis. Pseudo aneurysms are seen in liver transplant and pancreatitis while Pregnancy and portal hypertension are associated with true aneurysms. Most of the SAA are incidental findings (80%) [3,4].

Gastrointestinal bleeding is due to invasion and fistulate formation (13%) into the stomach, duodenum, pancreatic duct, and colon [5]. Sometimes there may be mesenteric steal and small bowel ischaemia leading to pain in abdomen because of arteriovenous fistulae which may be due to fistulation to vascular structures such as the splenic and portal veins [6].

This patient presented with rectal bleeding probably due to fistulation with the pancreatic duct and thence to gastrointestinal tract. There was evidence of acute on chronic pancreatitis without pseudocyst in our patient.

Few authors have described fresh bleeding per rectum from SAA due to rupture into a pancreatic pseudocyst with fistula to the colon and communication of pseudo aneurysm with the splenic flexure [2,3]. Advancement in endovascular embolization has led to safe and effective non-surgical treatment of Haematochezia from a splenic artery pseudo aneurysm in a patient with a pancreatic pseudocystocolic fistula [7]. This patient was successfully treated after the pseudo aneurysm was embolised via catheter directed coils.

Splenic artery aneurysms and pseudoaneurysm are not chance findings especially when patients presents with haematochezia on a background of chronic alcoholic and pancreatic disease. Imaging like CT angiography, especially if upper and lower gastrointestinal endoscopy fails to identify the cause of bleeding are lifesaving investigation and should be thought of intelligently. Safe and effective alternative to surgery is endovascular embolization techniques.

Copyright: ©2017 Gattani S, et al. This is an open-access article distributed under the terms of the Creative Commons Attribution License, which permits unrestricted use, distribution, and reproduction in any medium, provided the original author and source are credited.