Tuberculous Pseudoaneurysm of Descending Abdominal Aorta in Association with Tuberculosis of Spine: A Rare Complication

20-year-old man with dull osphyalgia and intermittent hemoptysis for 8 months came to emergency department of our hospital due to sharp pain of back without the history of trauma [1-15]. At the time of admission, his vital signs were stable without fever (36.5 ?). The findings of the physical examination were negative. Laboratory studies revealed positive finding of PPD test. Sputum staining and culture for acid-fast bacilli were positive. The patient was treated with anti-tuberculosis drugs for 7 days and went home without treatment of pseudoaneurysm since the infection of M. tuberculosis is in active stage.

A 20-year-old man with Tuberculous pseudoaneurysm of aorta in association with tuberculosis of spine (Figures 1A-1D). 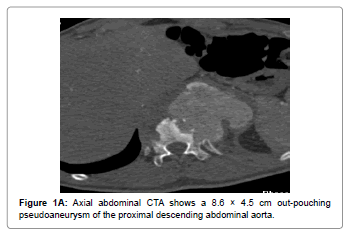 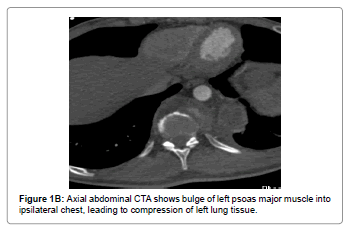 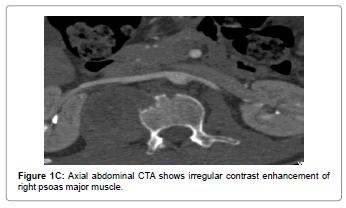 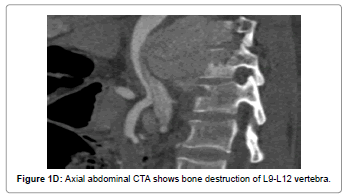 A pseudoaneurysm is a hematoma that forms as the result of a leaking hole in an artery. The formation of a pseudoaneurysm begins with a defect in the arterial wall. Blood then leaks through the defect into the extravascular space where it is encapsulated by connective tissue and becomes organized. Pseudoaneurysm secondary to infection of M. tuberculosis is a rare complication. It was first reported by Weigert in 1882 [3] Till now, less than 100 cases were reported all around the world. Among all case reports collected by the writer of article, only 2 case reports [7,8] were found in relationship with tuberculosis of spine, others were caused by miliary tuberculosis of lung and other kinds of reasons. In our patient, the pseudoaneurysm arose from the erosion of a tuberculous vertebra into the abdominal aorta. The pathogenesis observed in our patient arose from a nearby focus of inflammation eroding through the vessel wall. Recognition of tuberculous pseudoaneurysms remains difficult because they are so rare. They may present as a palpable mass in the superior of skin. Patients may also complain pain at the site of the aneurysm which may be accompanied by fever. Rupture or perforation of the aneurysm may lead to lethal lesion such as hemodynamic shock.

In summary, we report a case of a 20-year-old male with tuberculous vertebra with pseudoaneurysm formation of descending aorta. Pseudoaneurysm is a rare complication of infection of M. tuberculosis. It is recommended that contrast-enhanced CTA is the most proper choice. Treatment should include a full course of antituberculous chemotherapy and vascular surgery. If unrecognized, they may rupture with possibly lethal consequences.

Copyright: © 2016 Wang T, et al. This is an open-access article distributed under the terms of the Creative Commons Attribution License, which permits unrestricted use, distribution, and reproduction in any medium, provided the original author and source are credited.