Background: The aim of this study was to PLR (paltelet-lymphcyte ratio) might represent significant prognostic indices in patients with CLI (critical limb ischemia) and might provide superior prognostic information.

Materials and methods: One hundred and fourty one patients presented with CLI to our hospital between February 2007 and June 2012 who could not have radiological or surgical revascularization and had medical treatment are included in our study (n:133). Primary end point was determined as amputation (limb survival) and all-cause death and separate analyses were performed.

Results: Out of the 133 patients in the study. There were a total of 28 (26.9%) deaths and 46 (34%) amputation over a mean follow-up of 46 months. The amputations were above ankle in 24 (77%), below ankle in 7 (23%). All patients were grouped in two, those undergone amputation and those without amputation. Diabetes mellitus, hemoglobin and platelet levels, mean PLR, PLR ≥ 160 were strong univariable predictor of amputation.

Conclusion: Significant prognostic information can be obtained from routine blood results in patients with CLI. Stratification of CLI patients according to admission PLR should be considered in the limb survival analyses of future adjuvant and neoadjuvant trials to validate these findings.

One hundred and fourty one patients presented with CLI to our hospital between February 2007 and June 2012 who could not have radiological or surgical revascularisation and had medical treatment are included in our study. These patients were assessed by the vascular team consisting of cardiologists, interventional radiologists and cardiovascular surgeons and accepted as ineligible for endovascular intervention or conventional surgery; thus getting medical therapy instead. All patients with CLI defined by the TASC II (Trans-Atlantic Inter-Society Consensus) for the management of peripheral arterial disease. The arterial anatomy of the lower extremities was assessed by digital subtraction angiography with use of either stepping techniques with a single contrast material bolus or multiple contrast material injections. Inclusion criteria were persistent rest pain for more than 2 weeks or ischemic skin lesions, ankle pressure below 50 mmHg or, in patients with diabetes and incompressible vessels, absent palpable ankle pulses or toe pressure below 30 mmHg. Standard treatment included cilostazol, statins, analgesics, antithrombotic drugs (aspirin), cardiovascular risk factor control, hemorrheologic agents (such as pentoxifylline), local wound care and antibiotics, if indicated. The local ethics committee approved the study protocol.

Patients with infected ischemic wounds (n=4), active cancer (n=1), unstable coronary disease (n=2) and steroid use (n=1) were excluded from outcome analysis. Eight patients were excluded according to these criteria. Thus 133 patients were included the study.

Demographic characteristics, medical histories, risk factors, laboratory studies (Table 1) were collected by the research team using a standardized database. Prior surgical or percutaneous revascularization was documented (Table 1). Any subsequent surgical intervention was also documented as follows: major amputation (above the level of the ankle) or minor amputation(below the level of the ankle).

Table 1: Baseline characteristics of patients. divided according to amputation. 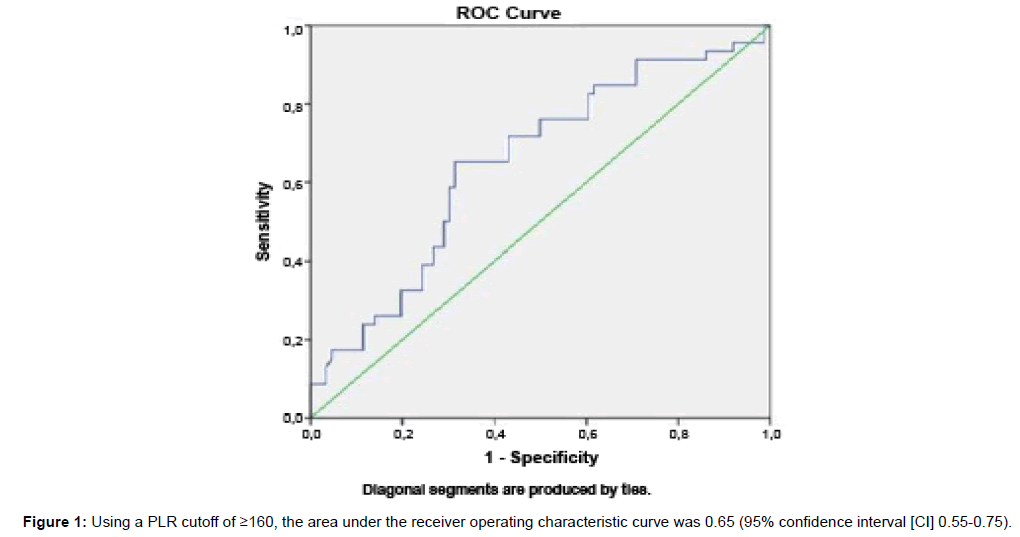 After the decision was made for patients as inoperable CLI, they were called in for follow-ups at the first, third, and ninth months and then with six-month intervals. Patients were contacted during routine check-ups at our centre on a periodic, but not uniform, basis. During the follow-up, the following events were registered: 1. Mortality for all causes, 2. Major or minor amputation. Latest statuses of the patients were ascertained via both phone and Social Security Death Index at the end of the study.

Continuous data were described using median, interquartile range (IQR) and 95% confidence intervals (CI). Categorical variables were summarized as percentages. The effect of PLR on outcome was studied by constructing a receiver operating characteristic curve with amputation as the primary variable.

The results of univariate limb survival analysis for each of the demographic and hematologic data are shown in Table 1. All patients were grouped in two, those undergone amputation and those without amputation. Diabetes mellitus, hemoglobine and platelet levels, mean PLR, PLR ≥ 160 (Table 1) were strong univariable predictor of amputation.

The findings of the present study demonstrate that PLR obtained from a universally available low-cost test (CBC with differential) provides relevant information regarding the risk of amputation in patients who are admitted with non-reconstructable CLI.

Chronic inflammation is both an etiological factor and physiological consequence of peripheral arterial disease [3,8]. Experimental models provide compelling evidence for the role of inflammation in the initiation, progression, and complication of atherosclerosis, confirmed in the clinical setting [9]. High levels of hs-CRP are correlated with angiographic coronary artery disease progression [10,11]. In the peripheral vasculature, both hs-CRP [7,10,11], fibrinogen and serum amyloid A [9] are related to the progression of atherosclerosis in peripheral arterial disease. Akinci et al. [12] demonstreated that circulating levels of acute phase reactants were associated with amputation risk in diabetic foot. Similarly, Violi et al. [13] reported that elevated levels of CRP were associated with poor long-term prognosis in patients with peripheral artery disease. Previous studies have shown that progression of atherosclerosis is associated with increased vascular events [3,14]. Progression of atherosclerosis and additional vascular events increase limb ischemia. Based on the findings of the present study, we also think that amputation may increase in patients with peripheral vascular disease with high inflammatory markers.

Thrombocytosis is commonly associated with a peripheral arterial disease and has been widely reported as an adverse prognostic marker [7]. The proinflammatory phase associated with systemic inflammation results in release of various immunological mediators such as interleukin (IL)-1, IL-3, and IL-6, which increase circulating platelet counts as a result of megakaryocyte proliferation [15,16]. It is well documented that subjects with pathologically increased platelet counts, that is, thrombocytosis, have an enhanced risk of thrombotic complications [17,18]. Experimental animal studies indicate that blood platelets both initiate atherogenesis and trigger its complications [19]. It is shown that, in healtly individuals with platelet count lower than normal, platelet aggregation increases when number of platelets increase(>250×109/L, >150×109/L [17,18]. Platelets play an important role in the progression of atherosclerosis. According to current research platelets interact with endothelial cells and leukocytes [20] and release inflammatory substances leading to adhesion and transmigration of monocytes [21]. These monocytes support inflammatory processes in the vessel wall promoting atherosclerotic lesions [22]. An elevated platelet count leading to an elevated PLR might therefore lead to an increase in vascular endpoints. Robless et al. found that whole blood platelet aggregation was significantly enhanced in PAD (Peripheric Arterial Disease) patients [7]. Also, previous studies have indicated that lymphopenia is associated with the progression of atherosclerosis. Lymphopenia may be caused by lymphocyte apoptosis in atherosclerotic lesions, which gradually increases with atherosclerotic burden. Likewise, a reduced lymphocyte count has also been associated with poorer prognosis [23-25].

Thrombocytosis and lymphocytopenia both correlate with the degree of host systemic inflammation, and the PLR reflects a novel marker incorporating both hematologic indices. Several studies has shown a relationship between the PLR and prognosis in colorectal and pancreatic cancer [26-30].

PLR value in vascular surgery is one of the subjects that have been recently studied, Gary and colleagues reported that PLR value of greater that 150 is a significant marker in PAD, similar to our study, PLR ≥ 160 is associated with a high proportion of amputation in patients with PAD.

The limitations of our study include the possibility of selection bias, the relatively small number of patients with a highly prevalent disease, and the possibility of missing some outcomes using the Social Security Death Index. Only 1 measurement of admission full blood count and calculation of PLR was included in the analysis, and it was not possible to determine whether an acute and brief inflammation was responsible for the correlation observed. Additionally, inflammatory markers, such as C-reactive protein, myeloperoxidase, and interleukin-6, were not analyzed and compared to PLR.

The results of the present study suggest that significant prognostic information can be obtained from routine blood results in patients with CLI. Stratification of CLI patients according to admission PLR should be considered in the limb survival analyses of future adjuvant and neoadjuvant trials to validate these findings.

Copyright: © 2014 Songur CM, et al. This is an open-access article distributed under the terms of the Creative Commons Attribution License, which permits unrestricted use, distribution, and reproduction in any medium, provided the original author and source are credited.