Silent Mutation: Characterization of its Potential as a Mechanism for Sterol 14ÃÂ±-Demethylase Resistance in Cercospora beticola Field Isolates from the United States

was found in the CbCyp51 gene. Currently, fungicide sensitivity assay could be the best method screen for C. beticola DMI resistance.

Cercospora leaf spot (CLS) of sugar beet (Beta vulgaris L.), caused by Cercospora beticola Sacc., is the most destructive foliar disease worldwide [1,2]. Severe disease can cause a reduction in extractable sucrose, root yield, and increased concentration of impurities and leading to higher processing losses [3,4]. CLS can be controlled using integrated pest management (IPM) strategies which include planting resistant varieties, crop rotation, deep tillage, control of alternate host plants, or application of foliar fungicides [5-9]. The disease can be controlled by limiting canopy development through the regulation of water use in irrigated areas and nitrogen fertilization [6,9].

Sterol demethylation inhibitors (DMIs) are most widely used for CLS control in sugar beet [9-11]. DMIs protect plants against foliar diseases such as that caused by C. beticola [10,11], and members of this group have a medium- risk of resistance due to their single mode of action [12]. Resistance to DMIs has been associated with polygeniccontrolled mechanism in which quantitative or additive interaction of several mutant genes can lead to a gradual shift in response to fungicides [9,11,12]. DMI resistance has been reported in fungi, and has been associated with multiple mechanisms [13-27]. DMI resistance in Zymoseptoria tritici (formerly known as Mycosphaerella graminicola) is due to single nucleotide polymorphic sites (SNPs) on the Cyp51 gene which led to alterations of the protein [27,28]. In Penicillium digitatum, a 126 base pair (bp) insert found on the Cyp51 gene was associated with DMI resistance [16]. Genetic analysis of the P. digitatum Cyp51 gene found five tandem repeats on the 126 bp insert. Furthermore, the insert was present in the regulatory region and acted as a transcriptional enhancer, leading to overexpression of the PdCyp51 gene [16]. DMI resistance has been associated with either uptake or efflux of DMIs which involved an adenosine triphosphate binding cassette (ABC) protein [14,15,29-31].

The research objective was to investigate a hypothesis that a silent mutation, which was found on the CbCyp51 gene, was potentially correlated with C. beticola DMI resistance. First, we analyzed the genetic changes on the CbCyp51 gene for DMI-resistant and -sensitive isolates. Second, we investigated whether a silent mutation on the CbCyp51 gene had a potential role in conferring C. beticola DMI resistance. This was achieved by transforming the CbCyp51 gene from DMI-resistant and -sensitive isolates in an isogenic yeast R-1 (ΔPdr-5), and determined ED50 values (effective dose leading to growth inhibition of 50%) for DMI fungicides used for disease control in sugar beet. Transformed yeast R-1 was chosen because it was the fastest method to test the hypothesis as compared to using the C. beticola, which required a complex transformation protocol.

Sequencing and analysis of Cyp51 gene from C. beticola isolates

Primer pairs (Table 1) were designed based on a consensus sequence of the Cyp51 gene from C. beticola isolates for PCR amplification. PCR reactions (25 μl) included DNA (2 μl), each of the primers (0.4 μM), dNTPs (200 μM each), 1X of a high fidelity buffer with 1.5 mM MgCl2 (Phusion®: ThermoFisher Scientific, Lafayette, CO), 0.4 units μl-1 of a high fidelity DNA polymerase (Phusion®: ThermoFisher Scientific), and a final volume was adjusted by the addition of PCR grade water. PCR run parameters included an initial denaturation at 98°C for 30 s, 25 cycles of denaturation at 98°C for 10 s, annealing at 60°C for 30 s, and extension at 72°C for 30 s with a final extension at 72°C for 10 min. PCR products were separated by gel electrophoresis on a 0.8% agarose gel and 0.5X of Tris borate-EDTA buffer (EMD Chemicals, Gibbstown, NJ), stained with ethidium bromide (IBI Scientific, Peosta, IA), and visualized under UV (570-640nm) illumination (UVP LLC, Upland, CA).

An aliquot (5 μl) was obtained from each PCR product, treated with ExoSAP-IT® reagent (2 μl) (USB Corporation, Cleveland, OH) to remove unincorporated primer pairs and non-specific fragments. The reaction was incubated at 37°C for 15 min and inactivated at 80°C for 15 min. Cleaned PCR products were sequenced at the Sequetech Corporation (Mountain View, CA) using a set of primers that included Cbdm-519F, CBdm906F, and CBdm2284R (Table 2). Three overlapping sequences of the Cyp51 gene were obtained that included a partial fragment of the promoter region, a complete open reading frame (ORF), and a partial fragment of the 3’ untranslated region (3’ UTR).

Partial sequences were assembled using the web version of CAP3 program and were analyzed using the DNA Baser Software (HeracleSoftware, Germany). The assembled sequences were analyzed for fidelity in which the predicted nucleotides were compared to chromatograms from sequenced data. An alignment was obtained for assembled partial sequences and a sequence from a C. beticola DMIsensitive isolate (GenBank accession # HM778021) and was performed using the MEGA ver. 5 software [37]. We determined predicted amino acid residues for the Cyp51 protein for each C. beticola isolate, and compared those residues with predicted amino acid residues for C. beticola DMI-sensitive isolate (GenBank accession # ADW54535) using the MEGA ver. 5 software [37]. This was performed to identify any potential amino acid changes which could be present on the C. beticola Cyp51 protein.

Total RNA was extracted from overnight cultures from either transformed or non-transformed yeast R-1 strain using a yeast RNA kit (E.Z.N.A®: Omega Bio-Tek Inc., Norcross, GA). Total RNA concentration was determined by measuring the absorbance at 280 nm using a spectrophotometer (NanoDrop-1000®: Wilmington, DE). Purified total RNA (5 μl) was separated by gel electrophoresis in 1% agarose gel, 1X Tris-borate-EDTA buffer (EMD Chemicals) and visualized as described above. The purified total RNA was reversetranscribed to cDNA using a qScript® cDNA synthesis kit (Quanta Biosciences Inc., Gathersburg, MD), which included random oligonucleotide primers. The cDNA was PCR-amplified using a pair of primers such as CbdmCyp51F and CbdmCyp51R (Table 1). These primer pairs spanned a region of ~425 base pairs that included targeted partial sequence of the Cyp51 gene and a partial fragment of the plasmid vector. PCR products were cleaned using the ExoSAP-IT® reagent (2 μl) and sequenced at the University of Wyoming-Nucleic Acid Exploration Facility (UW-NAEF) in both directions using CbdmCyp51F and CbdmCyp51R (Table 1). Directional cloning of the Cyp51 gene insert within the plasmid vector was confirmed by PCR amplification. The sequences were subjected to nucleotide-nucleotide BLAST search [40] and compared with other sequences in the NCBI/ GenBank® database.

Data analysis was performed using the language of R statistical computing environment [44] and estimated dose-response using a Cedergreen-Ritz-Streibig modified model [45]. Our null hypothesis was that a silent mutation at codon 170 on the Cyp51 gene had a potential role in C. beticola DMI resistance. Hormesis model (CRS.5) was used because growth stimulation was observed at a low dose of tetraconazole. The model was a modified non-linear regression based on five parameters5 using a dose-response curve (drc) statistical add-on package [46,47]. Below was the expression that defined the relationship between response (y) and dose (x)

Parameters from the CRS.5 model were estimated at fixed alpha value (α=0.25). The dose-response estimated ‘y’ which was the maximal response at zero dose, ‘c’ was an estimate of lower limit of the doseresponse curve, ‘b’ estimated the steepness of the curve after the maximal hormetic effect, and ‘e’ had no straightforward interpretation in this model, but it estimated a lower bound on the ED50 value [45]. Whereas (‘d + f’) estimated upper bound on growth stimulation (‘f’>0) whereby a larger value of ‘f’ was correlated with increased growth stimulation (hormesis) as long as its value was positive. For instance, statistical analysis for hormesis was the same as testing for ‘f’ = 0 based on fixed α value (0.25). ED50 value for each C. beticola isolate was estimated based on the modified log-logistic model [45,47] and results were classified as either low (<0.01 μg ml-1), medium (0.01 to 1.0 μg ml- 1), or high (>1.0 μg ml-1) [33]. Dose response-curves were fitted based on radial growth of C. beticola or optical density (OD) at 600 nm of yeast measurements.

Putative secondary structures of the Cyp51 mRNA of C. beticola were predicted based on the DNA sequences of a DMI-sensitive isolate CB6-80 (GenBank accession # HM778021) and a DMI-resistant isolate RR-08-940 (GenBank accession # HM778022) using the RNAfold program of the Vienna RNA Websuite (http://rna.tbi.univie.ac.at/cgibin/ RNAfold.cgi) [48]. Determination of secondary RNA structure was performed using the RNAfold and was based on a comparative sequence analysis [23]. The algorithm constrains prediction of minimum free energy (MFE), and provides the best thermodynamic folding by taking into consideration factors such as base-pairing and unpaired regions of the sequence [49]. Additionally, the algorithm computes MFE on the assumption of a ‘nearest neighbor model’ achieved through the application of empirical estimates of thermodynamic parameters on neighboring interactions and loop entropies, and used as a mechanism for scoring folding structures [23,49].

Growth inhibition was determined for each C. beticola isolate from the Red River Valley (RRV) and Central High Plains of the United States and compared with that for a DMI-resistant isolate from Greece. Radial growth was measured from PDA plates amended with DMIs, inoculated with each C. beticola isolate, and compared with corresponding measurements obtained from a non-amended PDA control (Figure 1). Results revealed that C. beticola DMI-sensitive isolate RR-08-418 had a low ED50 on tetraconazole of 0.96 μg ml-1 compared to DMIresistant isolates with ED50 values included 21.0 and 65.6 μg ml-1 (Table 3). In addition, all C. beticola isolates showed hormesis [46,50] at low concentrations of tetraconazole (Figure 2). No ED50 value was obtained for propiconazole and difenoconazole, because these DMIs were too effective against the tested C. beticola isolates at doses below 0.01 μg ml-1

Predicted structure of the messenger RNA (mRNA) was determined using RNAfold based on the C. beticola Cyp51 sequence of a DMI-sensitive isolate CB6-80 and a DMI-resistant isolate RR-08-940 (Figure 3). The putative mRNA structure for DMI-resistant isolate RR- 08-940 with a silent mutation which did not lead to predicted amino acid substitution at position 170 had a slightly different folding pattern on the lower region as compared to that from DMI-sensitive isolate CB6-80 (Figure 4). 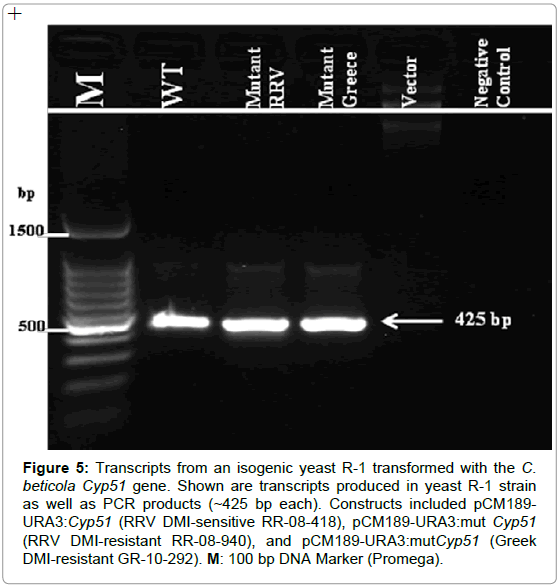 Non-transformed yeast R-1 strain, transformed with plasmid, and transformed with constructs with the C. beticola Cyp51 gene from a DMI-sensitive isolate RR-08-418, a DMI-resistant RR-08-940, or DMI-resistant GR-10-292 showed medium ED50 values of between 0.02 and 0.09 μg ml–1 in culture amended with tetraconazole (Table 4). Furthermore, all transformed yeast R-1 strains showed hormesis (growth stimulation) [46,50] at low concentrations of tetraconazole (Figure 6). Growth stimulation was significant especially at low tetraconazole dose (one-sided t-test, p<0.05) for 3 yeast strains (Table 4). However, no response curve was obtained for propiconazole and difenoconazole because the two DMI fungicides were effective at all rates used.

The genetic analysis of two RRV C. beticola DMI-resistant isolates found a few silent mutations on the coding region of the Cyp51 gene (Table 3). This was determined using a partial fragment of the CbCyp51 gene obtained from C. beticola DMI-sensitive RR-08-418 and DMI-resistant isolates (RR-08-940 and GR-10-292), cloned in a plasmid vector, and transformed into an isogenic yeast R-1 strain. Our results indicated that low concentrations of tetraconazole led to growth stimulation (hormetic response) of C. beticola isolates (Figure 2). Hormesis was first reported in yeast [55], and was later reported in fungi such as Pythium aphanidermatum mefonoxam-resistant strain, the causal organism of damping off disease in sugar beet, in which 10% growth stimulation was observed in culture amended with sub-lethal doses of mefonoxam [56]. A similar effect was reported for Sclerotina homoeocarpa, the causal organism of Dollar leaf spot in turf grass, in which growth stimulation was observed in culture amended with sub-lethal concentrations of trinexapac- ethyl [57]. However, we do not believe that hormesis may be associated with DMI resistance in C. beticola isolates because growth stimulation was mainly observed for low concentration of tetraconazole.

We could not develop a diagnostic assay for the rapid detection of C. beticola DMI resistance because the mechanism is not known. Hence, further studies will be required to investigate additional mechanisms which have been associated with DMI resistance in other fungi [14,15,35]. Currently, screening for C. beticola for DMI resistance could effectively be performed using fungicide sensitivity.

Copyright: © 2015 Obuya JO, et al. This is an open-access article distributed under the terms of the Creative Commons Attribution License, which permits unrestricted use, distribution, and reproduction in any medium, provided the original author and source are credited.