The membranes containing facilitated transport groups for Carbon dioxide had been prepared by immobilizing PAMAM (Polyamidoamine) (Generations 0, 1, 2, 3, 4) dendrimer into the polymeric membranes. The dendrimer incorporated membranes were prepared by the phase inversion method. The permeation abilities of the membranes for pure CO2 and binary mixture of CO2/N2 were calculated. The effects of feed gas pressure on the permeability of the membranes were studied. The results of the permeation experiments showed that PAMAM dendrimer (Generation 4) composite membrane possessed a better CO2 permeability and selectivity over N2 than the any other membranes composite with other generations of dendrimer (Generations 0, 1, 2, 3).

The increase in the concentration of various hazardous gases in the atmosphere results in numerous environmental problems like global warming, greenhouse effect etc. A large number of research studies have been carried out on the process of capturing and storage of CO2 from gaseous mixture [1,2]. Membranes and membrane processes are not a recent invention. The preparation of synthetic membrane and their utilization on a large industrial scale however are a more recent development which has rapidly gained a substantial importance due to the large number of practical application. Now a days; membranes are used to produce potable water from sea to clean industrial effluent and recover valuable constituent, purify or fractionate macromolecular mixture in food and drug industries and to separate gas and vapours. They are also key component in energy conversion system and in artificial organs and drug delivery devices. Membrane technology is one of the most interesting technologies for its applications in various fields including Biological applications [3-6]. Lin et al. [5] in his research study reported the substrate selectivity of Lysophospholipid Transporter (LplT) involved in Membrane Phospholipids remodelling in Escherichia coli. Tong et al. [6] carried out their research study on the structural insight into substrate selection and catalysis of Lipid Phosphate Phosphates in the cell membrane. Besides its applications in different fields membrane separation technology can be used for the gas separation purpose as it is one of the cost effective process and easy to operate. Because of high permeability and selectivity, the facilitated transport membranes are very useful for gas separation applications. There are various kinds of membranes containing facilitated transport groups, such as ion-exchange membrane, fixed carrier membrane and liquid membranes etc. [1]. Because of the higher permeability and selectivity fixed carrier membranes are more suitable for gas separation. A few researchers have been reported about the fixed carrier membranes for CO2 separation [2,7]. Works on gas separation applications using membranes composite with PAMAM dendrimer are limited. However, PAMAM dendrimer immobilized liquid membranes are reported by distinguished researchers [8,9]. In this research paper, we have been emphasized on gas separation behaviour of PAMAM dendrimer (G-0, G-1, G-2, G-3, G-4) composite solid membranes due to its stability and regeneration. The dendrimer composite membranes selectively permeated CO2 because of the reaction between –NH2 and CO2 producing a carbamate ion and a protonated base [8].

Thus for separation of CO2 molecules the reactions occurred as follows:

Preparation and characterization of polymeric membrane: The flat sheet membranes were prepared by dissolving Polysulfone (PSF) in NMP at room temperature (28°-30°C). To this solution, a definite amount of PEG-400 was added and the solution was kept on stirring to prepare the casting solution. When the solutions become clear a definite amount of Dendrimer (0, 1, 2, 3, 4 generations) was added individually for the preparation of different membranes and kept it on stirring until it became a clear solution. Then the solutions were casted on glass films and the glass films were placed in water (coagulation) bath for about 24 hours. Then the flat sheet membranes were dried at room temperature (28°C). Then the finally prepared membranes were analyzed experimentally by IR analysis (PERKIN Elmer system 2000), X-ray Diffraction analysis (JDX-11P-3A, JEOL, Japan), TGADTA analysis (PERKIN Elmer PC series, DSC 7). The morphology of the membranes were studied by Scanning Electron Microscope (LEO 1427 VP, UK) analysis etc. For each type of membrane we tested three numbers of membrane samples to get the maximum accuracy. The schematic diagram of membrane fabrication system and gas separation experiments shown in the Figures 1 and 2. 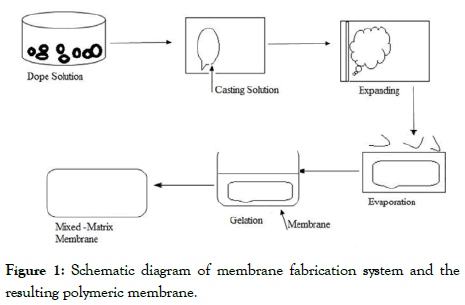 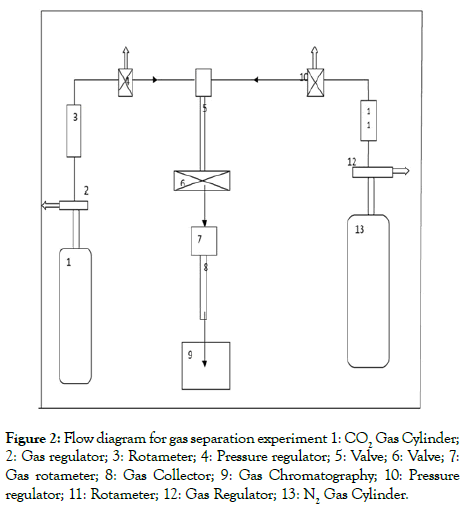 Where Q is the measured volumetric flow rate (at standard pressure and temperature), P is permeability, l is membrane skin layer thickness, A is effective membrane area and ΔP is the Pressure difference across the membrane. The common unit of Permeance is GPU (1 GPU=10-6 cm3 (STP)/cm2 s cm Hg). The ideal gas separation factor or Selectivity is given by equation (2) Figure 4: IR analysis of the membranes before/after permeation of CO2 (Each spectrum was obtained after the completion of 12 numbers of scans). 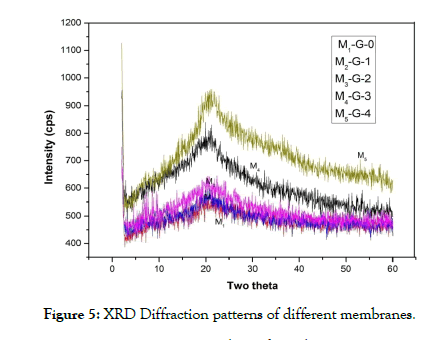 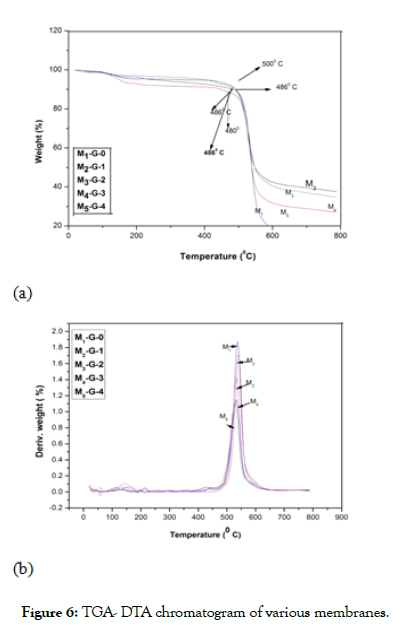 Effect of feed gas pressure on permeability: For the transportation of gases through the fixed-carrier solid membranes, the flux can be expressed in terms of Fick’s law with an effective diffusion coefficient Deff(p) that is dependent on pressure:

The pressure dependence of the diffusion coefficient for gas transport through the membranes can be evaluated from the steady-state permeability. Koros, Chan and Paul in 1977, expressed the equation as zero at the downstream face. Then by applying the Leibenitz rule, the equation becomes 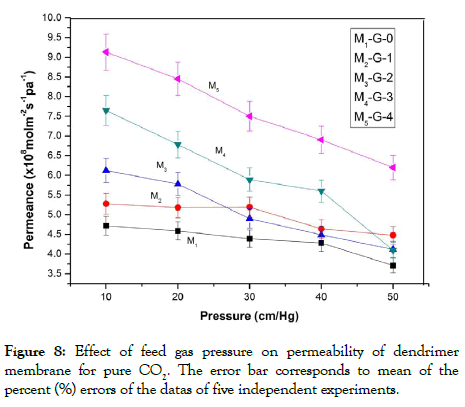 Figure 8: Effect of feed gas pressure on permeability of dendrimer membrane for pure CO2. The error bar corresponds to mean of the percent (%) errors of the datas of five independent experiments. 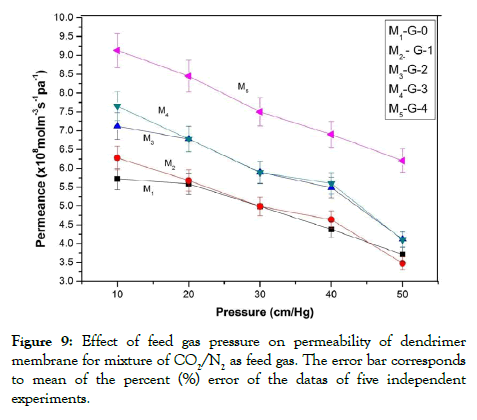 Figure 9: Effect of feed gas pressure on permeability of dendrimer membrane for mixture of CO2/N2 as feed gas. The error bar corresponds to mean of the percent (%) error of the datas of five independent
experiments. 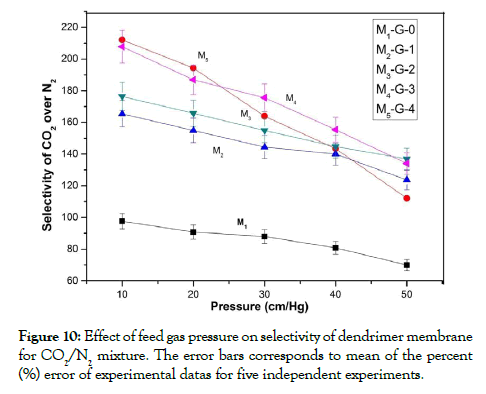 Figure 10: Effect of feed gas pressure on selectivity of dendrimer membrane for CO2/N2 mixture. The error bars corresponds to mean of the percent (%) error of experimental datas for five independent experiments. 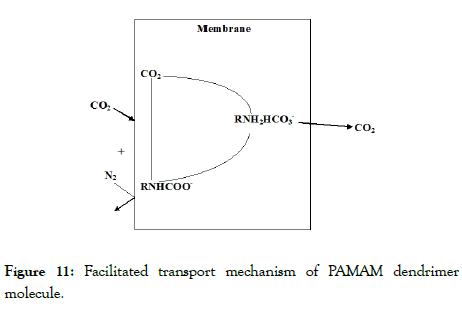 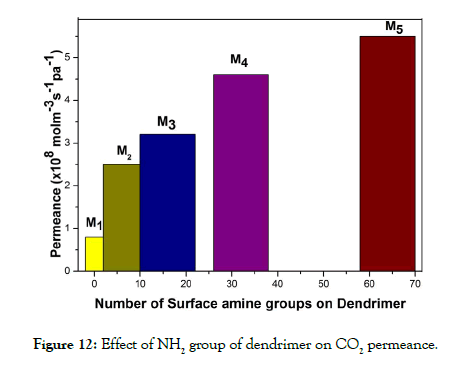 Figure 12: Effect of NH2 group of dendrimer on CO2 permeance.

Copyright: Â© 2020 Bharali P, et al. This is an open-access article distributed under the terms of the Creative Commons Attribution License, which permits unrestricted use, distribution, and reproduction in any medium, provided the original author and source are credited.