The development of an effective strategy for treatment of in-stent restenosis after BMS placement has been found to be extremely complicated. The therapeutic purpose for many patients is achieved with the implantation of DES – an option which is still not investigated and studied enough. 152 patients with implanted drug-eluting stents (different generations) for severe in-stent restenosis were followed up for a period of 9 years in the department of cardiology of University Hospital “St. Ekaterina”. Patients were divided into two groups – 131 patients with implanted first generation DES, and 21 patients – with second generation DES. Patients were followed up clinically (reversed angina, MI, emergency CABG, death), EchoCG and/or ECG stress test. Patients with angina pectoris and/or decreased LV function were assessed by conventional or CT angiography. Serious complications were not observed. 9 patients were with significant in-stent proliferation, and the others were with patent stents. Implementation of DES for treatment of in-stent restenosis is an established method, because of its reliability and safety with low percentage of complications.

In-stent restenosis (ISR), lack of treatment for chronic total occlusions and diffuse coronary artery disease in diabetics are fundamental challenges in interventional cardiology. Restenosis after bare metal stent (BMS) implantation has been considered to be the most significant problem in coronary interventional treatment [1]. Proven risk factors are: small diameter of the vessel, previous restenosis, long stented segments, ostial lesions, and diabetes mellitus [2]. Several techniques and strategies for the treatment of ISR have been used historically – atherectomy, cutting baloon, brachytherapy, POBA, DES, CABG [3,4]. Each one demonstrated some success but the best approach remains unsettled [5]. Drug - eluting stents (DES) have dramatically reduced the rates of restenosis and target lesion revascularization compared with BMS [6,7]. 12 years after the first DES implantation the “perfect stent” is not found yet, but the variety of stents and cumulated experience, especially after the introduction of the first generation DES, approved them as a safe and reliable method for treating of in-stent restenosis in patients with different risk profile. This review will focus on the treatment of patients with ISR with different generation DES implantation.

To evaluate and analyse early and late results in patients with instent restenosis treated with different generation’s drug-eluting stent for a period of 2 years.

This was a retrospective study of 152 patients with implanted drugeluting stents (different generations) for significant in-stent restenosis, who were followed up for a period of 9 years – from January 2004 – up to December 2012 in the department of cardiology of University Hospital “St. Ekaterina”.

Patients were divided into two groups:

All of the patients were followed up for early or late manifestation of reversed angina, MI, emergency CABG, death, repeat revascularization, LV function assessment. Physical examination, echocardiography and/ or ECG stress test (according to indications and contraindications) were performed for each patient. Patients with angina pectoris and/or decreased LV function were checked by conventional angiography or CT angiography (Table 1). 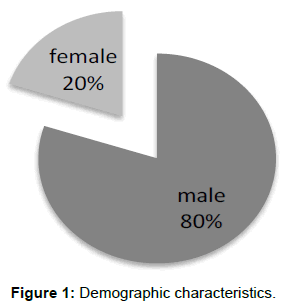 The main clinical characteristics of each patient are summarized in Table 2. In both groups prevail patients with stable angina with no severe heart failure. The percentage of patients with chronic renal insufficiency is relatively low (none in group II). There are no patients after surgical revascularization in the second group.

Highest is the frequency of arterial hypertension and dyslipidemia, followed by diabetes mellitus and smoking concerning the risk factors for ischemic heart disease (Table 3).

PCI was performed according to standard methods via a radial or femoral approach using a 6 Fr guiding catheter. Treatment with clopidogrel was started prior to the procedure. Following sheath insertion, unfractionated heparin was administered as bolus doses of 10 000 U. Analysis of the angiographic characteristic of the treated vessels shows that the target vessel was LAD in both groups (56% in group I and 48% in group II), followed by Cx in group I (28%) and by RCA (33%) in group II (Figure 2). There were no left main artery angioplasty. Regarding the morphological pattern prevailed long diffuse lesions in both groups. In group I more occlusions were treated. The culprit lesion ranged from 70% to 100% diameter stenosis by quantative coronary angiography. The mean lesion length was 28 mm in both groups. Predilatation was done in 85% of the cases in both groups. As per the standard protocol high pressure postdilatation was performed in both groups. Only 2 patients from the first group were with implanted 2.75 mm stents. DES diameter varied from 3.00 to 4.00mm for all of the other patients. 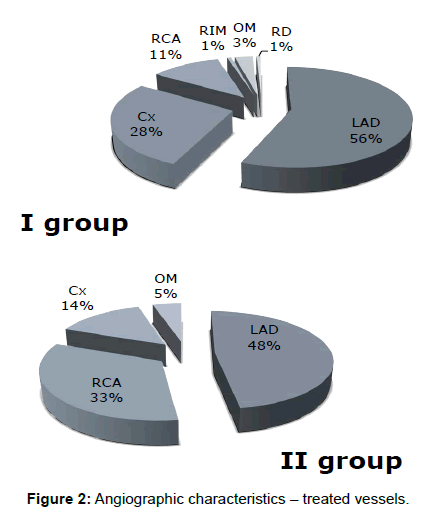 Patients were followed up for early and late complications. Clinical condition, lab results, ECG, EchoCG of all of the patients was verified after the procedure. It was observed improvement in clinical status, ejection fraction, and physical capacity after DES placement for severe in-stent restenosis.

Long – term all the patients were followed up for 24 months (± 6 months) for reversed angina, MI, emergency CABG, death, repeat revascularization, LV function assessment (Figure 3). 42 patients (28%) were assessed by conventional coronary angiography because of recurrent angina pectoris. 9 (6.8 %) of the examinations revealed significant in-stent proliferation, as all of them were with implanted DES from the first generation. The others – showed patent stents, with no significant proliferation. No severe complications were registered in either group. 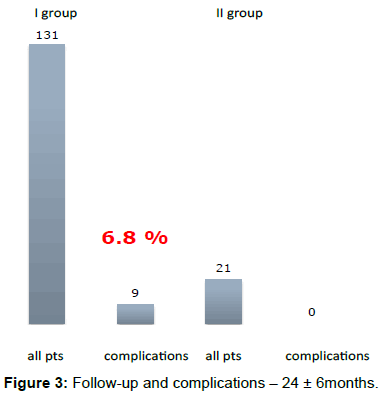 DES implantation is an alternative method in treating ISR of BMS with low rate of restenosis and late thrombosis [8]. SES do not show any difference concerning the rate of ISR and stent thrombosis when compared with second generation DES in our study. First generation PES have higher rate of ISR and stent thrombosis compared to II generation DES, pointing Taxus-Liberte analogs. The length of the stented segment shows correlations with the rate of the ISR. Our results demonstrate correlation to the latest interventional randomized controlled trials and studies concerning the use of first and second generation DES in treating ISR [9-12]. With the development of the new DES technologies there are a lot of comparisons and probably new conclusions to be made. Dedicated studies focused on the results of coronary surgery for patients with ISR remain very limited. Some investigators suggest that saphenous vein grafts have an unacceptably high incidence of failure among these patients and the use of arterial conduits should be considered to improve long-term results [13].

ISR remains an unresolved issue after BMS implantation especially when used in complex lesions. Implementation of DES for treatment of in-stent restenosis is a leading method, because of its reliability and safety with a very low percentage of complications and significantly reduced clinical and angiographic restenosis rates in selected patients.

Only patients with clinical data of restenosis were checked; small group of patients were assessed by conventional coronary angiography; no IVUS controlled angiography was made to assess the grade of neointimal proliferation.

Copyright: © 2014 Hristova N, et al. This is an open-access article distributed under the terms of the Creative Commons Attribution License, which permits unrestricted use, distribution, and reproduction in any medium, provided the original author and source are credited.