Esophageal perforation due to a foreign body in an adult is relatively rare, and carries a high morbidity and mortality. It usually occurs with sharp foreign bodies like bone pieces, toothpick, dentures and rarely an open safety pin. Here we report an interesting case of a 19-year-old female, who presented at three weeks following ingestion of an open safety pin, with a recent onset esophageal perforation to the left pleural cavity. The rigid upper endoscopy failed to remove the foreign body and was managed successfully by surgery as a rescue treatment.

Esophageal perforation due to a foreign body is relatively rare, and carries a high morbidity and mortality (10%-40%) [1]. It occurs with varieties of sharp foreign bodies ranging from bone, denture, toothpick and rarely an open safety pin. Only 1% of all cases is complicated by perforation of the esophagus, and can lead to a life threatening conditions of severe mediastinitis, empyema and sepsis [2,3]. Here, we report an interesting case of esophageal perforation in an adult due to accidental ingestion of an open safety pin.

A 19-year-old female presented to the emergency department with a 2-day history of left sided chest pain. Three weeks earlier, she had an accidental ingestion of some objects while drinking a glass of water. Since then she was having mild chest discomfort while taking food and drinks. On examination, she was afebrile but restless, with pulse rate of 110 beats/min, blood pressure of 110/70 mm Hg, respiratory rate-26 breaths/min. Her abdomen was soft, chest auscultation revealed decreased air entry on the left basal region. The laboratory investigations were unremarkable apart from leucocytosis (17,600/ mm3). Chest X-ray revealed an opened safety pin at T10/T11 level with the pointed end projecting upward with no hydropneumothorax Figure 1. After resuscitation, rigid endoscopic removal of foreign body was done by the otorhinolaryngologists team. However, the foreign body could not be visualized. She was further investigated with computed tomography (CT) of the chest, which confirmed an impacted foreign body in the lower esophagus with left pleural effusion indicative of lower esophageal perforation Figure 2. 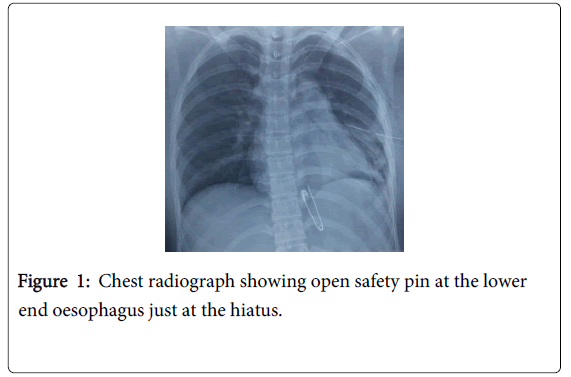 The patient was shifted to the surgical ward, further resuscitated and stabilized with intravenous fluids, broad spectrum antibiotics, and analgesics. Tube thoracostomy was done on the left side which drained 300 ml of serosanguinous fluid. She then underwent urgent laparotomy via a modified Makuuchi incision (“L” type). The distal esophagus was mobilized by opening the lesser sac and widening of the crus of the diaphragm. The opened safety pin was seen perforating the lower esophagus (2 cm wide defect on the left posterolateral aspect) just above the hiatal opening. The pin was partly intramucosal and extramural. It was dislodged inside the stomach, and removed via gastrostomy (Figure 3). There was a minimal serosanguinous contamination of the mediastinum, which was suctioned and lavaged. The perforation site was refreshened and closed in single layer with 2/0 interrupted vicryl sutures. It was further buttressed with partial fundoplication. The tube gastrostomy (TG) via the foreign body removal site of gastrostomy opening and feeding jejunostomy (FJ) was also placed to divert bile and postoperative nutrition respectively. Postoperative recovery was uneventful. Feeding via jejunostomy was started from the first postoperative day (POD). The tube thoracostomy drained serous fluid, and was removed on the eight day. She was allowed clear liquids orally on the 10th POD, and gradually shifted to normal diet. The repeat CT chest showed no oral contrast leak or collection at the esophageal closure site. The TG and FJ were removed on the sixth and seventh weeks of surgery. At 8 months of follow-up, she was doing well. Figure 3: Intraoperative photograph showing retrieval of safety pin through the gastrostomy (a), which was 5cm size in maximum dimension (b).

Esophageal perforation due to an open safety pin is usually described in children, and its occurrence in an adult is rarely reported. Ingested foreign bodies often get stuck at two sites in the gastrointestinal tract, esophagus and the distal ileum [2]. With prolonged retention and impaction in the wall, they may later erode with its pointed end and present with perforation, as seen in our case. Although the foreign body was there for the last 3-weeks, the mediastinal reaction due to the esophageal perforation was of the recent one to two days.

Symptoms vary from chest pain, pain in the back radiating to the shoulder, fever and dyspnea depending on the contamination [1]. Most of the time, they present acutely following ingestion, however, delayed perforation of thoracic esophagus at three weeks following ingestion of foreign body is rare, as seen in our case. Diagnosis, though challenging is usually made by appropriate history of foreign body ingestion, chest radiograph and CT imaging [4].

Treatment is by rigid endoscopic retrieval of safety pin under general anesthesia. In presence of experienced endoscopists, it can even be removed by a flexible endoscopy, by pushing the pin into the stomach, where it is closed and pulled outside [5]. Furthermore, in the setting of esophageal perforation, the use of esophageal self-expanding metallic stent in conjunction with tube thoracostomy after foreign body removal has been advocated as an alternative to surgery. It is especially preferred in haemodynamically stable patients with minimal thoracic and mediastinal contamination [4,6].

In the cases of free perforation, endoscopic failure to remove foreign body, sepsis with hemodynamic instability and in a resource-limited setting (as ours) rescue surgical management is the preferred treatment modality. The foreign body at the lower esophagus is removed via laparotomy, perforation site repaired primarily (even beyond 72 hrs.) and buttressed with tissue flaps. A feeding jejunostomy (postoperative nutrition) and tube gastrostomy (gastric and duodenal content diversion) are placed, which will be extremely useful, should the primary repair fail [1,7].

Our case was unique because, the esophageal perforation due to an open safety pin was seen in an adult patient (although more commonly described in children). The perforation was delayed after three weeks of ingestion of foreign body, she was managed successfully by laparotomy (modified Makuuchi incision) with a primary repair (although >72 hrs. of perforation) of esophagus without need for thoracotomy.

Copyright: © 2018 Pandit N, et al. This is an open access article distributed under the terms of the Creative Commons Attribution License, which permits unrestricted use, distribution and reproduction in any medium, provided the original author and source are credited.