An aneurysm is a blood filled sac protruding from a blood vessel and the most common forms are true, false and mycotic. True aneurysm refers to a condition which engages the 3 layers of the vessel namely the intima, media and adventitia layers, whereas a pseudoaneurysm, is characterized as a retention of bloodleakage which arises from the arteries and veins, but restricted beside the vessel by the surrounding tissues [1]. In 1982, Hobson et al. reported the incidence of aneurysm in the subclavian-axillary artery by 1% and about 88% of that was seen in the subclavian artery [2]. According to the literature, axillary artery aneurysm have been reported due to frequent use of crutch and baseball pitchers [3,4]. Axillary artery aneurysms can cause symptoms such as ischemia, thrombosis, life-threatening bleeding and pressure effects on adjacent neurovascular structures [5-7]. There may be no symptoms present at all until the aneurysm ruptures. This study reported a case of pseudo-aneurysm of the axillary artery, which produced a total destruction of the head and proximal part of the humerus bone.

A 75-year-old female with history of headache, lethargy and fever was hospitalized in our hospital six times from October, 2012 to April, 2013. During this period, many differential diagnoses were discussed including anemia, mediastinal lymphadenopathy, TIA and pneumonia. There was no history of traumatic lesions and known infectious disease. On physical examination, there was a swelling on her right axilla with bruising and non-pulsatile mass detected in palpation (Figure 1a). The capillary filling time and distal pulses were also normal;there were no problems in terms of motor and sensory systems. Cardiac and abdomen examination was normal but lung examination revealed a decrease in breath sound in the right upper chest. Paraclinical findings revealed the following results: 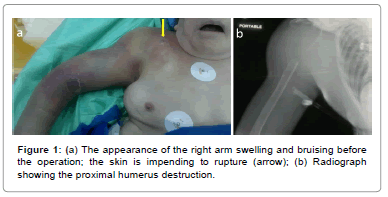 Figure 1: (a)The appearance of the right arm swelling and bruising before the operation; the skin is impending to rupture (arrow); (b) Radiograph showing the proximal humerus destruction.

WBC count: 19200/mm3, Hb level: 9.2 gram/deciliter, ESR: 82 millimeters/hour, PT: 13 seconds, and PTT: 33 seconds. Shoulder X-rays revealed proximal humerus destruction without any new bone formations (Figure 1b). The chest X-ray was otherwise normal, and only showed a round opacity in the right arm accompanied with proximal humerus absorption. The skin on the anterior aspect of the shoulder was impending to rupture and bula formation was seen due to increased tension.

According to the patient’s general conditions such as fever, redness, warmth, and elevated ESR, our first differential diagnosis was bone destruction due to infection (abscess). As a result of the bad general condition, the patient was scheduled for operation and open drainage. After prep and drape and consent sedation, a small incision was made on the area of the damaged skin, but abruptly a spurt of a lot of clots was seen (Figure 2a) and thereafter, a massive hemorrhage developed. Immediately, the cardiovascular surgeon attended to the patient. The wound extended proximally and a proximal control of the artery was done on the axillary artery. After surgical incision extension to the distal, axillary artery aneurysm and destruction of proximal humerus was seen and a 3 mm hole was found on the anterior aspect of the axillary artery (Figure 2b). In addition, four adjacent ribs were partially destroyed on their external sides and their intercostal muscles were destroyed. Adjacent pleura were incidentally opened due to debridement and clot evacuation. The hole of the artery was repaired directly with prolene 5-0 sutures. A chest tube was inserted and the wound closed and dressed. Distal pulses were normal and bilaterally symmetrical. Thereafter, the patient was made to go through physiotherapy and her symptoms were gradually relieved. One month post-operative X-ray did not show any significant healing of the bone. Unfortunately, 2 months later the patient died as a result of the disease and it was no longer possible to follow the course of her vascular and humeral bone recovery. 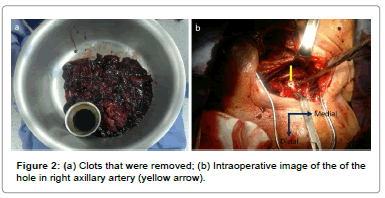 Figure 2: (a)Clots that were removed; (b) Intraoperative image of the of the hole in right axillary artery (yellow arrow).

In comparison with arterial aneurysms, an aneurysm in the upper limb is usually rare [8]. Due to limited reports of the axillary artery aneurysm, the symptoms and its prognosis are not well known. Axillary artery aneurysms can cause vascular or neurologic complications and can mimic an abscess-like lesion as in our case. Sometimes, axillary artery aneurysm is seen as intra-thoracic masses in the chest x-ray, which can be differentiated from the tumors of the chest and lungs [9,10]. Due to the lethal nature of arterial aneurysm, irreversible complications can be prevented with accurate diagnosis and early treatment. Differential diagnosis include pulsating tumors (such as bone sarcoma and osteoclastoma), arterio-venous malformation, hematoma, lymphadenopathy, lipoma and abscess [11,12]. There are many articles on axillary artery aneurysm and its treatment, but according to our research, there are few articles on bone destruction due to the effect of arterial aneurysms. In 2015, UgËï¿½ur Tiftikçi reported a case of femoral artery aneurysm after total hip arthroplasty. After surgery, the patient presented with the chief complaint of swelling and hip pain. After the X-ray, evidence of femoral bone destruction was seen. Thereafter, according to swelling, ultrasound was performed for the patient where the femoral artery aneurysm was confirmed. Finally, the patient was operated on by a vascular surgeon and after removal of the hematoma; the femoral artery aneurysm was repaired [13]. In another case report, a similar scenario was developed. Nine months after total hip arthroplasty, the patient presented a case of sub-acute pain and minimal swelling. According to the symptoms, elevated ESR and CRP; the patient was hospitalized with suspected infection; however, the results of scintigraphy were not in favor of the suspected infection. Finally, the diagnosis was confirmed by magnetic resonance imaging and angiography. No revision surgery was performed in that case [14].

In the early stages of a pseudo-aneurysm, the symptoms are not clear enough to be identified. However, delayed diagnosis of a pseudoaneurysm rupture can be lethal. In this case, it was very troublesome to identify the pseudoaneurysm because there was neither a history of injury nor arterial intervention. Before performing the biopsy, we had to do more diagnostic procedures such as CT scan, MRI, sonography or angiography. However, strong clinical suspicion and diagnostic methods that detect axillary artery aneurysm help more. Once the diagnosis is confirmed, it should be treated to prevent complications of the axillary artery aneurysm.

Copyright: © 2016 Amroodi MN, et al. This is an open-access article distributed under the terms of the Creative Commons Attribution License, which permits unrestricted use, distribution, and reproduction in any medium, provided the original author and source are credited.