Prevalence of Hypertension and Associate Risk Factors among Workers at Hawassa University, Ethiopia: An Institution Based Cross Sectional Study

Background: Hypertension is a serious public health concern which alone is estimated to cause 7.5 million (12.8% of all causes of death) deaths per year and it doubles the risk of many cardiovascular diseases.
Objectives: To assess the prevalence of hypertension, the associated risk factors and knowledge plus practice related to hypertension.
Materials and methods: The study was conducted in January-March 2014. Using simple random sampling technique 620 participants were selected. Data were collected by structured questionnaire. Data were analyzed using SPSS version 16 computer software.
Result: The response rate of the study was 99.6%. Majority, 61.7% (376), of the respondents were male and 47.8% (272) were aged 25-34 years. Among respondents 122 (19.7%) were found to be hypertensive either by systolic or diastolic blood pressure out of which 54 (44%) were found hypertensive by both. Out of 122 hypertensive persons, 45 (36.9%) did not know their hypertension status. Some 192 (31%) of the respondents had a BMI score of 25 and above out of which 41 (21.4%) were obese. Respondents whose BMI measures ranged from 25-29.99 and those who were 30 years old and above were at increased risk of hypertension AOR=3.8 (95%CI 1.22-12) and AOR=3.90 (95%CI 1.10-14.01), respectively.
Conclusion: Prevalence of hypertension among the study subjects was significantly high and most of them didn’t know their hypertension status. The level of hypertension related knowledge and practice of protective healthy life style were very low calling for urgent intervention.

Hypertension is clinically defined as a blood pressure of 140/90 mmHg or more, based on at least two readings on separate occasions [1]. Non-communicable diseases (NCDs) which include hypertension are reported to be the leading causes of death globally, killing more people every year than all other causes of death together [2]. It is estimated that Hypertension alone causes 7.5 million (12.8% of all causes of death) deaths per year and it increases the risk of cardiovascular diseases such as stroke, congestive heart failure, coronary heart diseases, renal failure, and peripheral arterial diseases by double [3].

Unlike the popular opinion, available data shows that nearly 80% of NCD deaths occur in low and middle-income countries [2]. Sub- Saharan Africa (SSA) has a disproportionate burden of both infectious and chronic diseases compared to other world regions. For Sub-Saharan Africa the current disease estimates are only based on limited data, but projections indicate that the existing demographic and epidemiologic transitions increase in non-communicable diseases (NCDs) [4].

In Ethiopia, according to reports by the Federal Ministry of Health hypertension accounted for 1.4 percent of all deaths in 2000/01, making it the 7th leading cause of death in the country for the year [5]. According to 2014 WHO report also Ethiopia lost 691,000 lives in the year of which 30% was due to NCDs [6].

Healthy work force is essential in the context of optimal productivity and enhanced competitiveness. Thus several studies explored the problem of hypertension amongst different groups of workers in India, Brazil and other countries [7,8]. Generally the information on hypertension in Ethiopia is limited to our knowledge there is no previous data on hypertension prevalence and associated factors among occupational groups conducted in Ethiopia.

A cross sectional study design was employed from January 2014 to March 2014. The study was conducted in Hawassa University: Main, Agriculture, Wendo Genet, Awada and Referral campuses. Hawassa is located 273 km south of Addis Ababa and is the regional capital of Southern Nations Nationalities and Peoples Region. The University has nearly 7000 permanent and other contractual workers. The study subjects were selected from each department (administrative, academic and hospital staffs) based on the simple random sampling technique from lists obtained from all Colleges and the Institute of Technology human resource offices. Using EPI INFO version 6.04 sample sizes was calculated based on single population proportion. Based on this 622 staff members were selected out of which 620 respondents were obtained.

All data was collected following a well-developed, structured questionnaire consisting of close ended questions. The questionnaire covered demographic data: Knowledge and practice of the participants and anthropometric measurement space filled by experienced nurse data collectors. Pilot study was carried out at Hawassa College of Teacher’s Education to evaluate the validity of the questions before actual data collection. The English version of the questionnaire was translated into Amharic, the official language of the study area and was back-translated to Amharic to ensure consistency. Confidentiality of the findings was strictly maintained on all collected data.

A digital scale was used for weight measurement. Standardized height measuring device was used for height measurements. Waist circumference was measured with a soft tape on standing subjects midway between the lowest rib and the iliac crest. A private area was chosen for a tape measurement. Application of the tension tape over the marked point making sure that the tape was horizontal across the back; and making the recording at the point of normal expiration.

Ethical clearance was obtained from the Institutional Review Board of Hawassa University College of Medicine & Health Sciences before the start of the research and all ethical requirements were adhered to. 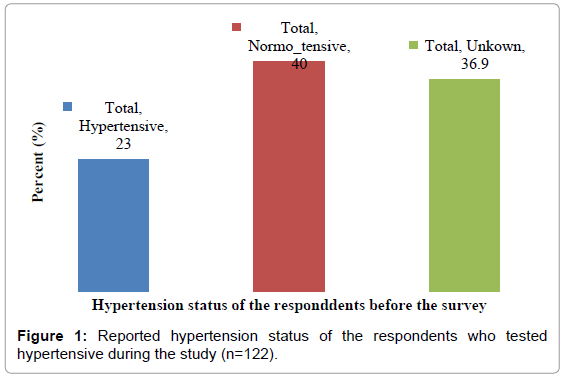 Respondents’ knowledge levels about hypertension could influence their preventive and control actions. The knowledge of the respondents who participated in this study was described based on individual items using frequencies and corresponding percentages. The overall knowledge level was also assessed by computing scores for correct responses of all relevant items into a single composite variable. This approach was used to perform further analyses about respondents’ hypertension-related knowledge.

The overall proportion of correct responses to questions that assessed knowledge of the respondents about hypertension ranged from a minimum of 53.4% to 97.7%.

The overall knowledge of the interviewees was computed from the 9 knowledge items and categorized into a single composite variable with three ordinal response options. There were 286 (46.1%) of the respondents with “low level” knowledge about hypertension, 216 (34.8%) of them had “medium level” knowledge, and 118 (19%) had “high level” knowledge (Figure 1). The median and inter quartile range of knowledge score were 7 and 3 out of possible 9 points.

Table 2: Association of knowledge levels and selected socio-demographic characteristics of the respondents, May 2014. 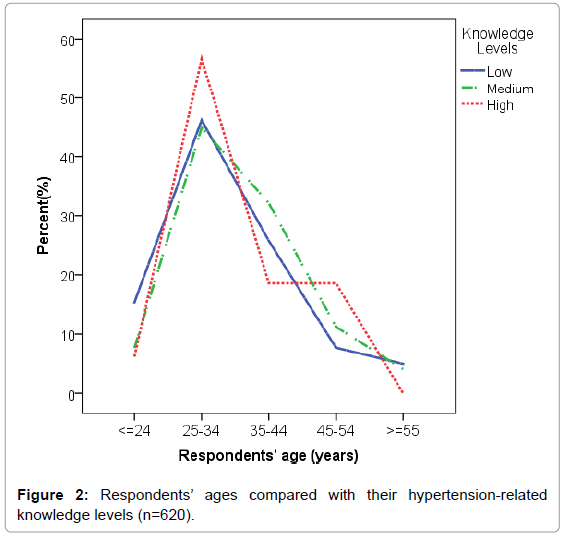 Among the anthropometric measurements taken during the study; waist circumference and BMI which summarizes the height and weight data have been tabulated below. One-fourth of males scored at least 94 cm and one third of the females scored a waist circumference of at least 80 cm. Over 192 (31%) of the respondents had a BMI score of 25 and above out of which 41 (21.4%) were obese (had a BMI exceeding or equal to 30.0).

The SBP of the respondents consistently increased as the BMI increased.

Socio-demographic and economic predictors of hypertension among the study subjects

Identification of factors that could explain prevention and control practices of hypertension at the household level was one of the core objectives of this study. There was no association between the hypertension status of the respondents and some sociodemographic characteristics (p>0.05). These included: sex, marital status, occupation of the respondent and monthly household income (Table 3).

Table 4: Association of practices and anthropometric measures with hypertension status of the participants.

This study revealed the following main findings. The prevalence of hypertension (blood pressure ≥ 140/90 mmHg) among the study population was 19.7%, of which 44% tested hypertensive by both systolic and diastolic measures. Regarding the level of awareness of the respondents about hypertension, only 22% had high level of knowledge. About 49.7% of the participants reportedly said that they regularly check their BP and 45% perform exercises on a regular basis. Almost all (98.8%) never smoked cigarettes and 88.2% did not take alcohols. About 31% of the respondents had a BMI measure of at least 25. Age, taking regular BP checkups and BMI were among the factors identified to independently predict hypertension status of the study participants.

The reported hypertension prevalence of 19.7% in the study’s sample is less than the finding reported by Mulenga and Siziya among academic staff from University of Zambia, which reported a prevalence of 40% [9]. The observed difference might be attributed to the reported level of exposure to the risk factors for hypertension. In the Zambian study, 22% smoke cigarettes and 63% consume alcohol which is very high compared to the current findings (only 1.2% smoked and 11.8% consumed alcohol).

The current study’s prevalence is also lower compared to finding from a systematic review that involved 45 different studies conducted in West African countries, an overall prevalence ranging from 12%- 68.9% was reported among different workforces [10]. Specifically, the prevalence of hypertension among health care, bank workers and civil servants ranged from 17.5% to 37.5%. The prevalence of hypertension observed in this study is also lower compared to that reported among staff in Nigerian teaching hospital which was 36.6% [11].

This study showed that respondents older than 35 years were over four folds more likely to be hypertensive compared to those at most 24 years of age. Similar findings about the overall role of age in increasing the risk of hypertension among university staff were reported from Zambia [9] and West Africa [10].

From this study it might be concluded that prevalence of hypertension among the study subjects is significantly high (19.7%) and out of these 77% didn’t know their hypertension status. This could be considered an alarming figure with potential consequences in not making the necessary adjustments in modifiable risk factors and monitoring the progression of the disorder. Moreover, the level of knowledge related on hypertension and practice of protective healthy life style also pose serious public health concern.

Based on the findings in this study we strongly recommend: wider scale, multicentre investigations with more parameters for better picture on the point. Aggressive work by all stakeholders in synergistic approach towards awareness creation regarding hypertension, promotion of healthy life style and improving health checkups among the community is also highly recommended.

The researchers would like to thank, Hawassa University, Vice President Office for Research and Technology Transfer for the financial support obtained, Ato Sintayehu Tadesse for the support during the initiation phase of the project, all the research assistants and respondents for their generous support for the success of the research.

Copyright: © 2018 Esaiyas A, et al. This is an open-access article distributed under the terms of the Creative Commons Attribution License, which permits unrestricted use, distribution, and reproduction in any medium, provided the original author and source are credited.