Gastrointestinal (GI) bleeding is an important cause of morbidity and mortality in the population as well as in patients with cardiovascular disease [1]. Many studies show that GI bleeding in acute myocardial infarction (AMI) has a worse prognosis, even in mild cases. In addition, the treatment of these patients including the combination of antiplatelet agents, thrombolysis, anticoagulant therapy increases the risk of bleeding, especially GI bleeding [1]. GI bleeding prolongs hospital stay, higher in-hospital mortality and 6-month mortality [2-4]. Despite advanced in diagnosis and treatment, mortality after GI bleeding is still around 10% during the last half decade and higher inhospital mortality in severe patients [3].

It was a cross sectional and descriptive study.

All patients diagnosed with acute myocardial infarction at Tam Duc Heart hospital from January 2013 to March 2017 were enrolled in this study.

Patients with uncompleted data were excluded from the study.

Acute myocardial infarction: Detection of a rise and/or fall of cardiac biomarker values [preferably cardiac troponin (cTn)] with at least one value above 99th percentile upper reference limit and with at least one of the following: Symtoms of ischaemia; New or presumed new significant ST-segment-T-waves (ST-T) changes or new left bundle branch block; Development of pathological Q waves in the ECG; Imaging evidence of new loss of viable myocardium or new regional wall motion abnormality; Identification of an intracoronary thrombus by angiography [5].

Gastrointestinal bleeding: Overt GI bleeding: at least one of three following symtoms:

• Hematemesis or blood in nasogastric tube

Hemoglobin drop of more than or equal to 2 g/dL without an identifiable extraintestinal sourse [6].

Anemia at admission: According to WHO (World Health Organization), anemia occurs when Hb<13 g/dL for men and Hb<12 g/dL for women.

Death: Including death and serious cases considered as death.

Statistics were performed with SPSS version 22.0 (Chicago; USA). The P value of <0.05 was considered significant for all tests. The χ2 test to compare two ratios, t-test to compare two means. Non-standard deviation variable is described by median and interquartile range (IQR) (25%-75%). Significant clinical factors associated with GI bleeding were identified by univariable logistic regression analysis and then included in the multivariate logistic regression model with p<0.25.

A total of 643 patients with AMI admitted to Tam Duc Heart hospital from January 2013 to March 2017 were included in the present study.

Clinical features, laboratory test and treatment in AMI patients with and without gastrointestinal bleeding

All the clinical and biological data of AMI patients with and without gastrointestinal bleeding were presented in Table 2.

Table 2: Clinical and biological data of AMI patients with and without gastrointestinal bleeding.

Treatment of gastrointestinal bleeding during hospitalization

All of the AMI patients with overt upper GI bleeding were controlled with high doses PPI (proton pump inhibitors) intravenously for 72 hours and switched to oral route. Occult GI bleeding were treated with intravenous or oral PPI. Four cases of GI bleeding were identified as acquired coagulation disorders due to multiple organ failure and/ or thrombolytic therapy. These cases were supplemented with fresh frozen plasma, cryoprecipitated, and platelet concentrate.

In GI bleeding group, the time of event occurs on the second day with overt GI bleeding (IQR, 1-5) and upper GI bleeding (IQR, 1-7) and the third day with lower GI bleeding (IQR, 1-5). There were 9 (14.8%) patients underwent endoscopy (Table 3) and none of them had complications at the time of endoscopy (arrthymia, hypotension, respiratory failure). The mean hemoglobin dropped from 11.0 ± 2.6 g/ dL to 9.4 ± 2.0 g/dL. Most of patients didn’t have ST-segment elevation at admission (60.7%). The need for transfusion is 24 cases (39.4%). The number for pack red blood cell needed was one unit on average. 8 (13.1%) patients had to stop anticoagulant therapy. Only one case underwent emergency endoscopy (<12 hours). Almost cases were performed endoscopy after cardiovascular stablization. There wasn’t recurrent GI bleeding during hospitalization. PPI was used in almost cases (98.4%).

Table 3: Characteristics of patients with GI bleeding in endoscopy.

Predictors of GI bleeding in patients with AMI

In our study, we assessed the risk factors of GI bleeding in AMI patients by univariable logistic regression analysis and noted that all of the following conditions were correlated with GI bleeding (p<0.25) including age ≥ 70 years old, female, history of GI bleeding or heart failure or chronic renal failure or hypertension or diabetes mellitus or no smoking, at admission with heart rate ≥ 100 beat per minute, diastolic blood pressure<60 mmHg, anemia, Killip III, IV, thrombocytopenia<100000/mm3, PT<70s, renal failure with MDRD (Modification of Diet in Renal Disease)<60 ml/ph/1.73 m2, left ventricular ejection fraction on echocardiography<40% and during hospital stay with mechanical ventilation, vasopressors use, IABP (intra aortic balloon pump), pneumonia. However, in multivariate logistic regression analysis, only females, pneumonia and impaired renal function were independent risk factors of GI bleeding (Figure 1). 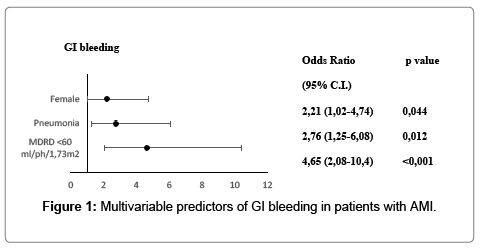 Figure 1: Multivariable predictors of GI bleeding in patients with AMI. 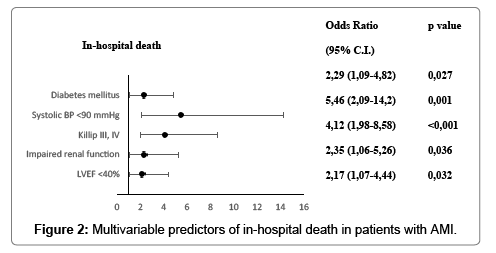 Figure 2: Multivariable predictors of in-hospital death in patients with AMI.

The mean age of patients in this study was 67.2 ± 13.8. The ratio on distribution of gender male:female was 2.2:1 and this result was compatible to previous studies on AMI. GI bleeding was observed in 9.5%, in which overt GI bleeding was 3.0% and occult GI bleeding was 6.5%. The proportion of GI bleeding reported in the previous studies about 1-9% in patients with AMI [2-4]. The rate of overt GI bleeding in AMI patients according to Guo was 2% [7], Ng was 2.7% [4] and Al- Mallah was 3.0% [3], which was similar to ours. Occult GI bleeding in our study accounted for the proportion of 6.5% higher than 2.6% Ng et al. [4], which may be due to different sampling methods. In addition, upper and lower GI bleeding were observed respectively on the second and third days. Therefore, we found that it is necessary to monitor hematocrit and hemoglobin (Hb) during treatment AMI on some high risks patients, especially in 7 first days.

The management of GI bleeding in AMI patients still has many difficulties. Anticoagulation and antiplatelet agents in the treatment of AMI patients increase risk of GI bleeding and, after that, GI bleeding can cause re-infarction. Previous studies showed that early endoscopy reduced re-bleeding and mortality [11,12]. In our study, only 14.8% patients were performed endoscopy. Most of them had gastritic and peptic ulcer disease on endoscopy. We found that it was necessary to resuscitation before endoscopy. Patients should be underwent diagnostic and therapeutic endoscopy within 24 hours, preferably after resuscitation and stable hemodynamic conditions.

In our study, multivariable analysis comfirmed the association of female, pneumonia and impaired renal function with GI bleeding. Predictors of GI bleeding were age ≥ 75 years ole, female, previous AMI, pneumonia, anemia at admission in the Guo’s study [7] and previous GI bleeding, impaired renal failure with MDRD<60 ml/ph/1,73 m2, Killip IV at admission in the Chua’s study [6]. Additionally, some of other risk factors composed of aspirin and/or NSAIDs use at home, organ dysfunction, dual antiplatelet agents and anticoagulant use [7,9,10,13].

Overall, the predictors of GI bleeding in AMI patients in our research were as the same as others. Our study found that female increased GI bleeding in AMI patients. Biological differences in platelet function and vascular reactivity, with different “response” to antithrombotic treatments account for most of these sex-based differences. In addition, gender-related difference associated with antithrombotic treatment due to lower body mass and renal function in women than men [14]. Consequently, the treatment related to anticoagulation should be in caution and pay attention to the dose on female patients due to their low body mass and high risk of bleeding.

Impaired renal failure was independent predictor of GI bleeding in our study. The percentage of acquired renal failure at the all stages in patients with acute coronary syndrome is about 30-40%, which make the prognosis severely and higher risk of bleeding. The patients with acute coronary syndrome had renal failure often have a high risk of bleeding because of anticoagulants overdose. Furthermore, renal dysfunction, which has been related to impairment of platelet aggregation and alteration of platelets’ interaction with vessel wall, was also a risk factor for gastrointestinal bleeding [6]. Therefore, we realized that it is necessary to estimate glomerular filtration rates as soon as patients admitted to the hospital. Some of patients known to have renal failure or risk of renal impairment should avoid use some specific anticoagulants or need to reduce the dose reasonably.

The rate of GI bleeding in AMI patients was 9.5%. Female, pneumonia, impaired renal failure with MDRD<60 ml/ph/1,73 m2 were independent predictors in AMI patients with GI bleeding. Gi bleeding prolonged hospital stay, increased the need of transfusion and not a major risk of in-hospital mortality.

Copyright: Â© 2018 Tran-Thi-Khanh T, et al. This is an open-access article distributed under the terms of the Creative Commons Attribution License, which permits unrestricted use, distribution, and reproduction in any medium, provided the original author and source are credited.