Objectives: We aim to describe the epidemiological and prognostic characteristics of non valvular atrial fibrillation related stroke.
Patients and methods: We retrospectively analyzed data of hospitalized patients from January 1st 2010 to June 30th 2012 in the two contiguous departments of cardiology and neurology, at the teaching hospital of Yalgado Ouédraogo, Burkina Faso.
Results: We recorded 391 cases of ischaemic stroke. Cardioembolic stroke was observed in 159 patients out of who, non valvular atrial fibrillation accounted for 43.5%. Atrial fibrillation was persistent/permanent in 60 cases (87%). The mean age ± SD was 63.3 ± 14.2 years (extremes: 26-91 years). Hypertension was observed in 85.5% of the cases. The mean CHA2 DS2 -VASc score was 4.72 ± 1.16. The mean HAS-BLED score was 2.35 ± 0.92 with a low to intermediate bleeding risk score (≤ 2) in 60.9 % of patients. The rate of vitamin K antagonists use was 52%. They were introduced at least a week after stroke onset in 34 cases. A mean follow up of two weeks in hospital noticed haemorrhagic transformation and ischaemic recurrence in respectively 8.7% and 2.9% of the cases. Mortality rate of 21.7% during hospitalization was predicted by large sized cerebral infarction and congestive heart failure (p<0.05).
Conclusion: Non valvular atrial fibrillation stroke is associated with in-hospital high mortality and is subject to early recurrence.

Ischaemic stroke is a leading cause of acquired disability and death in adults [1]. Cardioembolic stroke accounts for 14-30% of all ischaemic strokes and appears to be associated with higher mortality and early recurrence [2,3]. Atrial fibrillation (AF) is the most common cardiac source of cerebral embolism with many associated risk factors [4,5]. Managing AF alone or with stroke is challenging and costly [6-8]. Data regarding AF related stroke are scarce in Sub-Saharan African including Burkina Faso. We aim to describe the epidemiological and prognostic characteristics of Non Valvular Atrial Fibrillation (NVAF) related stroke during hospitalization period.

We retrospectively analyzed data of hospitalized patients from January 1st 2010 to June 30th 2012 in the two contiguous departments of cardiology and neurology, at the teaching hospital of Yalgado Ouédraogo, Burkina Faso, west Africa. Those were included in the study, patients with ischaemic stroke diagnosed by cranial Computed Tomographic (CT) scan and/or by clinical stroke (persistence of focal neurological symptoms for over 24 hours period) who presented AF confirmed by a standard 12-lead electrocardiogram (ECG) or 24-hours Holter ECG. Transthoracic echocardiography (TTE) was used to screen patients with non valvular AF in the absence of rheumatic or degenerative cardiac valvular disease and valvular prosthesis.

Lone AF was defined as a condition without associated concomitant cardiac source of embolism. The cerebral infarction was assumed largesized in case of infarct diameter above 30 mm at baseline. Congestive heart failure included shortness of breath weakness, edema, rales, rhonchi, or wheezes, presence of a third or fourth heart sound. Left ventricular ejection fraction (LVEF) was assessed by TTE in all patients. Urban area was defined by both Ouagadougou and Bobo- Dioulasso, the two biggest cities of Burkina Faso where International Normalized Ratio (INR) could be performed. Thromboembolic risk was evaluated according to CHA2DS2Vasc score [10]. Bleeding risk stratification was based on HAS-BLED score [11]. Cardiovascular vascular risk factors were evaluated according to the 2013 European Society of Hypertension/European Society of Cardiology [12].

For statistical analysis, EPI info TM software (version 7.0.9.34) was used. The categorical variables were expressed as percentages. Continuous variables were expressed in terms of means ± SD. Chi square test or Fisher’s exact test were used for proportions comparison as appropriate. A logistic regression model was used to identify risk factors independently associated with death. For each analysis, a significant difference was defined as p<0.05.

During the study period, 2010 patients were hospitalized at both departments. We recorded 391 cases of ischaemic stroke. Cardioembolic stroke was observed in 159 patients out of who, NVAF accounted for 43.5% (43 females and 26 males). Atrial fibrillation was persistent/ permanent in 60 cases (87%) and paroxystic in nine cases (13%). The mean age was 63.3 ± 14.2 years (extremes: 26-91 years). Forty five patients (65.2%) were ≥ 60 years old. Cardiovascular risk factors included hypertension in 85.5% (n=59), dyslipidemia in 24.6% (n=17) and diabetes in 21.7% (n=15) of patients. Alcohol abuse was observed in 25 cases (36.2%). Neurological deficit occurred in 63 cases and congestive heart failure was noticed in nine patients. The sociodemographic and clinical characteristics of the study patients at admission are shown in Table 1.

Table 1: Socio-demographic and clinical characteristics of study patients at baseline.

Concomitant potential cardiac sources of ischaemic stroke were noticed in 45 cases (65.2%). These underlying sources included hypertensive dilated cardiomyopathy in 15 cases and left sided thrombus in 10 cases (Table 2). Mean LVEF was 61.6% ± 14.6 (28- 80). Eight patients had a LVEF<40% and eleven had a LVEF between 40 and 54%. Cervical arterial Doppler ultrasonography performed in 28 patients has shown plaque in 23 cases without significant atherothrombotic stenosis (< 50%). 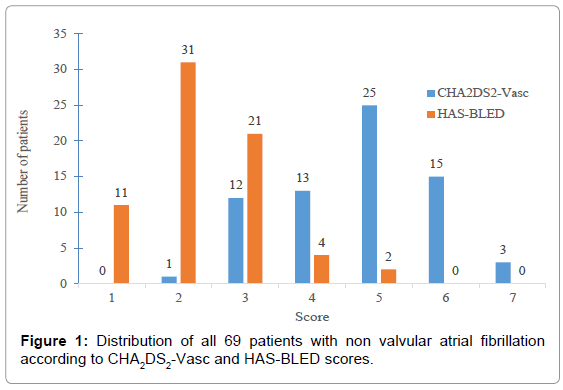 Figure 1: Distribution of all 69 patients with non valvular atrial fibrillation according to CHA2DS2-Vasc and HAS-BLED scores.

Low molecular weight heparin (LMWH), enoxaparin in our context was used for secondary prevention of stroke recurrence in 55 patients before switching to vitamin K antagonist (VKA) in 36 cases (52%). VKA were introduced at least a week after stroke onset in 34 cases and sooner in two cases. VKA were prescribed in 60.9% (n=31) of 51 patients without large sized cerebral infarction versus 27.8% (n=5) of those with larger cerebral infarction (RR=2.19; CI95%=[1.01-4.76]; p=0.02). VKA treatment was observed in 66.7% of the 42 patients from urban area versus 29.6% of 27 patients from other areas (RR=2.25; CI95%=[1.21-4.18]; p=0.003). Antiplatelet therapy was prescribed in 94.2% of the study patients. It was associated with VKA in 35 cases and used alone in 14 patients. Ventricular rate control was obtained using antiarrhythmic drug in 55% of the cases comprising amiodarone (n=14), β-blockers (n=19) and digoxine (n=5). Table 4 indicates therapy received by study population during hospitalization period.

Table 5: Factors associated with death on univariate and multivariate analysis in the 69 study patients during hospitalization period (RR: Risk ratio; OR: Odds Ratio; CI 95%: confident Interval at 95% of association measure; *Adjustment for variables listed on the table).

Table 6: Complications occurred during hospitalization period and immediate causes of death in all 69 patients with atrial fibrillation.

The retrospective pattern of the study and lack of ambulatory follow up data may have underestimated the assessment of some parameters. Nevertheless current results gave an overview of the problem in our setting. All study patients did not benefit from large-artery atherosclerosis research based on the fact that it was a retrospective study and we just reported data of those who underwent this Doppler ultrasonography. Moreover Doppler ultrasonography was not performed in patients with an obvious cardiac cause of ischaemic stroke and/or in those who could not afford such exam (knowing Burkina Faso belongs to low income countries with no share care system). Arterial angiography was not available at that time.

NVAF, the most common source of cardioembolic stroke was observed in 43.5% of all cardiac causes of cerebral embolism in our study. Damorou et al. [13] in Togo and Paciaroni et al. [14] in Italia have reported lower rates in patients presenting their first episode of ischaemic stroke with respectively 19.8% and 20.3% of the cases. Conversely, Yip et al. [15] at Taiwan observed 69% of AF in a subgroup of cardioembolic stroke. Discrepancies in rates may be explained by patients’ selection criteria and quality of AF screening methods used after stroke onset. A possible underuse of VKA for primary prevention of thromboembolism in AF may have played a role in low income regions such as Burkina Faso.

NVAF is frequently associated with other cardiac sources of stroke which were similarly found in Kim et al. series [16] and ours with respectively 65.2% and 68% of the cases.

In a Japanese study [17] including 234 patients suffering from NVAF related stroke, AF was classified as paroxystic and permanent in respectively 42.3% and 57.7% of the cases. Our data have supported results from Marini et al. [18] study in Italia with a persistent to permanent AF rate being above 80%. These marked differences in types of AF between studies are probably related to weight carried by 24-hours Holter ECG in detecting paroxystic AF after ischaemic stroke onset. Regardless of the type of AF (paroxystic or permanent), the annual risk of cerebral embolism in the absence antithrombotic treatment is identical and assessed to range from 3 to 5% but widely depends on CHA2DS2-VASc score [6]. The mean CHA2DS2-VASc score in our study was 4.72 and all patients had a score ≥ 2 indicating a very high risk of embolism and a need of antithrombotic treatment except contraindications. Moreover, bleeding risk was low to intermediate (HAS-BLED score: 1-2) in 60.9% of our study patients suggesting safer initiation of anticoagulation therapy. This bleeding risk was high (HASBLED score ≥ 3) in 39.1% of patients indicating cautious introduction of anticoagulation therapy with a close follow-up [19]. Secondary prevention of cerebral embolism in NVAF is widely addressed in series worldwide. Accordingly, it is recommended to quickly start treatment with heparinoïds in patients at very high risk of thromboembolism after an individual assessment of risk/benefit ratios [14,20,21]. For long term secondary prevention of ischaemic stroke in AF, VKA remain the gold standard treatment in reducing the risk of recurrence by 70 % [22]. In a survey of practice patterns of anticoagulation therapy in acute ischaemic stroke in Korea among physicians, the most common method of immediate treatment initiation was heparin followed by warfarin (68%) and then warfarin alone or warfarin with aspirin in the absence of large-sized infarct and haemorrhagic transformation [23]. In the PREFER in AF study, the rate of oral anticoagulation use in 2012 was >80% in Europe including patients at high risk of bleeding since publication of 2010 ESC Guidelines on atrial fibrillation [24]. Only 52% of our study patients benefit from VKA treatment. This relatively low rate of VKA use in our setting is partly due to physician’s worry about bleeding risk and also geographic and financial constraints on accessing frequent International Normalized Ratio (INR) follow-up. However, new oral anticoagulants a great progress in therapeutics could be an alternative to VKA in a near future and modify our practice [3], due to their simpler way of use and comparative reduction of major bleeding risk [25,26].

Early haemorrhagic transformation risk in AF related stroke accounts for 2.7% at one week [3]. Our results supported data from a prospective multicentric study of 1125 patients nevertheless suffering from ischaemic stroke of all origin with a rate of 8.7% and this haemorrhagic transformation is significantly associated with large-sized infarct [27]. Ischaemic stroke recurrence in AF is assessed to be 2.5% and 5% at one week and one month respectively [2,3]. We reported recurrence rate of 2.9% at two weeks period.

Atrial fibrillation related ischaemic stroke is classically severe with high mortality rate during the acute phase in comparison to other sources of cerebral embolism. We found in hospital rate of death (21.7%) that supported data from literature [2,13,28]. Mortality was predicted by large sized cerebral infarct and congestive heart failure (p<0.05). Death in cardioembolic stroke is mainly due to neurological complications and cardiac comorbidities [2].

NVAF related stroke is associated with higher mortality during hospitalization and subject to early recurrence. A better use of international guidelines on primary and secondary prevention of cerebral embolism in AF may contribute to reduce the burden of the problem. Introduction of INR self-measurement equipment in remote areas or new oral anticoagulants could be an alternative way of treatment follow-up in rural and semi-urban areas with poorly equipped hospitals.

All authors did fully participate in the study. Paper writing process was a team work.

We are grateful to Professor Jean Kaboré and team for the close collaboration in managing patients between cardiologists and neurologists. Thank you for giving us permission to collect data at neurology department.

Copyright: Â© 2015 Germain MD, et al. This is an open-access article distributed under the terms of the Creative Commons Attribution License, which permits unrestricted use, distribution, and reproduction in any medium, provided the original author and source are credited.