Ubiquitination, a post-translational modification that controls multiple cellular processes, has proven to be a common target for viruses. Recently, geminivirus C2/L2 protein has been shown to interact with the plant CSN5, catalytic subunit of the CSN complex, and possibly disrupt the activity of this complex over CULLIN1, thus interfering with the function of the CULLIN1-based SCF ubiquitin E3 ligases. With the aim of shedding light on the genetic interaction between geminivirus C2/L2 and the plant CSN5, we designed an infection experiment using a combination of mutant plant and virus. Our results indicate that the geminivirus Beet curly top virus (BCTV) infects the Arabidopsis CSN5a mutant less efficiently; moreover, mutation in BCTV L2 can be partially complemented by mutation in Arabidopsis CSN5a. These results suggest that the inhibition of the CSN5 activity might be an important role of geminivirus C2/L2 during the establishment of the infection, and raises the possibility that geminiviral infection might require CSN activity.

Viruses are obligate intracellular parasites, and as such must complete their life cycle by infecting living cells. During the infection, viruses interfere with the host biology in order to establish a cell environment suitable for viral replication and spread; to this end, viruses modulate the cell machinery for their own benefit.

Ubiquitination is a highly dynamic posttranslational modification consisting in the attachment of a small peptide, named ubiquitin, to a target protein, which in most cases, but not all, is degraded by the 26S proteasome as a result. Ubiquitination is a key regulator of a plethora of cellular processes and, therefore, has been described as an attractive target for viruses. Geminiviruses, plant viruses with small circular, single-stranded DNA genomes, have been recently shown to target components of the ubiquitination pathway in their hosts: (i) geminivirus C2/L2 protein alters the regulation of SKP1-CUL1- Fbox (SCF) ubiquitin E3 ligases [1]; (ii) Beet severe curly top virus C4 protein induces the ubiquitin E3 ligase RKP, thus regulating cell cycle [2]; (iii) Cotton leaf curl Multan virus betaC1 protein interacts with the ubiquitin conjugating enzyme SlUCB3, probably leading to its down-regulation [3]; (iv) infection with Cabbage leaf curl virus upregulates the expression of components of the ubiquitin-proteasome pathway [4]. Among these recently described interactions between geminiviruses and ubiquitination, the one regarding C2/L2 is especially intriguing. C2/L2 from three different geminivirus species (Tomato yellow leaf curl virus –TYLCV-, Tomato yellow leaf curl Sardinia virus – TYLCSV- and Beet curly top virus –BCTV-) has been shown to interact with CSN5, the catalytic subunit of the CSN complex [1], a conserved essential eukaryotic complex that regulates the activity of the large family of Cullin- RING ubiquitin E3 ligases (CRLs). However, CSN5 also seems to play a role in its monomeric form (reviewed in [5]). The members of the CRL family are regulated by the attachment and removal of a small peptide, similar to ubiquitin, named RUB (for Related to Ubiquitin, in plants and budding yeast) or Nedd8 (neuronal precursor cell– expressed developmentally downregulated 8, in animals and fission yeast). Genetic and biochemical data suggest that both phases of attachment and removal of this peptide are required for the proper function of the CRLs in vivo (reviewed in [6]). Interestingly, in the presence of C2/L2 there is a specific hyper-rubylation of CULLIN1 (CUL1), suggesting that C2/L2 would be inhibiting the activity of the CSN complex over this Cullin. In line with this idea, transgenic Arabidopsis plants expressing C2/L2 display phenotypes that are consistent with an impairment in the activity of several CUL1-based SCF E3 ligases [1]. It is noteworthy that overexpression of a given F-box protein may circumvent the general SCF malfunction caused by C2/L2 [7], which raises the enticing idea that geminiviruses might be not only hampering, but rather redirecting the activity of SCF complexes, coopting the SCF-mediated ubiquitination pathway for viral functions. Given that SCFs are key regulators of numerous fundamental cellular processes, the capability of geminiviruses to selectively interfere with or hijack these complexes might represent a novel and powerful strategy in viral infections.

Geminivirus C2/L2 protein has been shown to interact with tomato CSN5 and Arabidopsis csn5a in yeast and in planta [1]. In an attempt to unveil the genetic interaction between geminivirus C2/L2 and the plant CSN5, we designed an infection experiment using a combination of mutant plant and virus. For this purpose, we inoculated wild-type Arabidopsis plants and the knockdown cns5a-1 mutant [8], which is severely defective in the derubylation of all major families of CRLs, with a wild-type (WT) or a L2 mutant BCTV, ΔL2/2, containing a termination codon at position 2041 [9]. At 28 dpi, symptoms were evaluated and samples were subjected to slot-blot analysis to determine the presence of viral DNA. According to both symptom evaluation and viral DNA accumulation, mutation in BCTV L2 negatively affects the infection in wild-type Arabidopsis (Figure 1), even though it has been described not to affect viral infection in Nicotiana benthamiana and Beta vulgaris [9,10]. In a CSN5a mutant background, however, the difference between the wild-type and the L2 mutant virus, measured as either percentage of symptomatic plants or viral DNA accumulation, is lower than in wildtype plants (Figure 1). To confirm that the viral DNA accumulated in plants infected with the mutant virus does not result from replication of revertants, we sequenced the full L2 ORF obtained by PCR of DNA extracted from seven of these plants (two WT and five CSN5a at 28 dpi) using primers AAGCGGCCGCCATGGAAAACCACGTG and AAGGCGCGCCCTTATCCAAGTATATC [1]. All analyzed fragments contained the mutation, confirming that this is stable in infected plants. 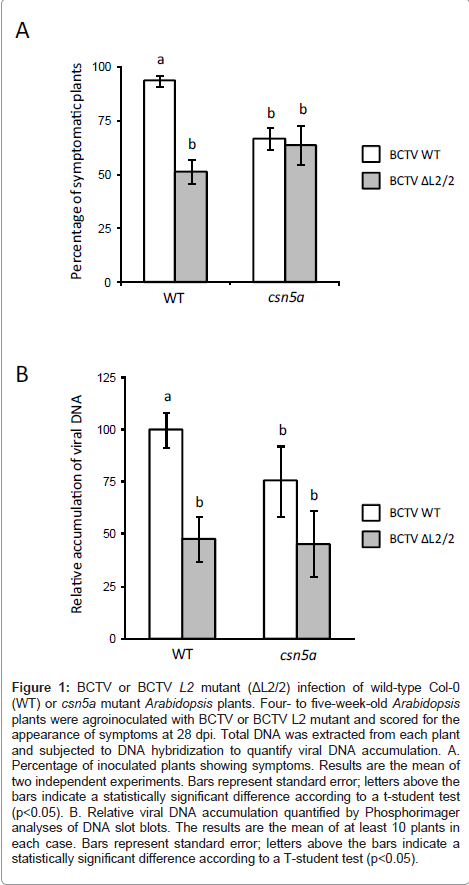 It is worth noting that BCTV infection takes place less efficiently in CSN5a mutant plants (Figure 1). CSN5a is a pleiotropic mutant, affected in numerous processes regulated by CRLs, including vegetative and reproductive growth [8], and therefore these results should be considered cautiously. However, a tantalazing possibility is that the reduced geminiviral infection could be a consequence of the requirement of a fully functional CSN complex, in the context of a co-option of this complex. Interestingly enough, silencing of the CSN subunit CSN3 in N. benthamiana results in a hindered geminivirus infection [11], supporting this hypothesis.

Additionally, a partial complementation of the mutation in L2 can be detected in the CSN5a mutant background; this result suggests that the inhibition of the CSN5 activity, either as part of the CSN complex or in its monomeric form, might be an important role of L2 during the establishment of the infection. The fact that the interaction between C2/L2 and the plant CSN5 is conserved among geminivirus species belonging to different genera, together with the partial complementation described in this work, suggest that the C2/L2-mediated inhibition of the CSN5 activity may be a general mechanism exerted by geminiviruses to accomplish infection. Given that ubiquitination is a well-known target for viruses, and that the CSN complex is a master regulator of a major class of ubiquitin E3 ligases, we hypothesize that this conserved protein complex might be unveiled as a common target in both plant and animal viral infections in the near future. In line with this idea, CSN5 has been recently presented as a hub onto which independently evolved virulence effectors from bacteria and oomycetes converge, pointing at this plant protein as a common target for pathogens [12].

Copyright: © 2011 Lozano-Durán R, et al. This is an open-access article distributed under the terms of the Creative Commons Attribution License, which permits unrestricted use, distribution, and reproduction in any medium, provided the original author and source are credited.