Mediastinal Malposition of Catheter after Venous Cut down

Central venous catheterization is one of the very essential tool of modern intensive care. Apart from monitoring the critically ill patient, it helps in administration of antibiotics, parenteral nutrition, chemotherapy, fluids and drug delivery. Peripheral inserted central catheter (PICC) by surgically isolating basilic vein or venous cut down, is considered one of the safe technique to access central veins. The advantage of this procedure is that traumatic complications like pneumothorax, hemothorax and arterial puncture are less as compared to directly placing central catheters. Malposition (intracaval or extracaval) is one of the commonly encountered complication associated with central venous catheterization. Extracaval is rarely encountered and there are isolated case reports in the literature where catheter tip is found outside the central vein into the surrounding structures. Knowledge of such complications is important else these remain unrecognized resulting in delayed treatment and poor outcome. Here, we report a unique case, wherein tip of infant feeding tube inserted from basilica vein was found in anterior mediastinum resulting bilateral hemothorax and pleural effusion.

A 58-year female, diagnosed as a case of mucinous cystadenoma of the pancreatic body and tail underwent distal pancreatectomy with splenectomy. On post-operative day (POD) 2, patient had tachypnea, tachycardia for which she was shifted to ICU. On auscultation there were bilateral crepitations. Chest X ray revealed bilateral pleural effusion. Compression Doppler was also done to rule out deep vein thrombosis and was found to be negative. Fluid overload was suspected, and she was managed accordingly [1]. As patient condition did not improve, right basilic venesection was done on POD 3, using infant feeding tube 8 Fr, for central venous pressure monitoring and fluid and drugs administration. On POD 5, CXR showed bilateral moderate pleural effusion (Figure 1). To alleviate respiratory symptoms of the patient, an intercostal drainage tube (ICD) was put on right side which drained 1000 mL serous fluid on insertion and a total of 1350 mL in 24 hours. After this, respiratory distress improved, and pleural effusion decreased. Patient again developed shortness of breath on POD 7 and repeat CXR showed significant effusion, now on left side, hence another ICD was put (Figure 2). On POD 8, right and left ICDs drained 830 mL and 700 mL fluid, respectively. The ICDs kept draining large amounts of serous fluid bilaterally and condition of patient further deteriorated. On POD 10, patient was given plasma and packed cells as hemoglobin level was low (9 g/dL on POD 7) thinking that fluid loss could be because of hypoproteinemia. On POD 11, ICDs started draining serosanguinous fluid from bilateral chest tubes. Contrast enhanced CT of chest and abdomen was therefore, done to evaluate the cause of bleeding. Intravenous contrast was injected from venesection site was found to be spilling into the anterior mediastinum (Figures 3 and 4). Venesection catheter was blocked and left as such. It was not removed because of unstable condition of the patient and fear of bleed from puncture site. Despite best efforts, patient died on POD 13, probably because of ongoing mediastinitis [2]. 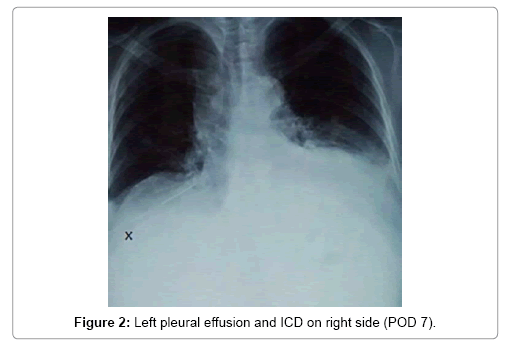 Figure 2: Left pleural effusion and ICD on right side (POD 7). Figure 3: CECT chest showing leakage of contrast in the mediastinum and pleural cavities. To establish central venous access, both basilic venesection and direct central line insertion are widely used techniques with their own complications; cutdown being limb threatening while central line insertion can be life threatening. Yet these procedures are performed very commonly as their benefits overweigh the complications when performed meticulously. The advantage of cutdown is that it is relatively easier and open approach, as compared to central line insertion which is blind particularly when ultrasound is not available. Complications associated with central venous catheterisation are divided into three groups: mechanical, infectious, and thrombotic. Prior studies have reported rates of mechanical complications such as arterial puncture, malpositioning, pneumothorax, hematoma or haemothorax occur in 5% to 19% of catheter attempts. Infectious complications were in 5% to 26% of catheter attempts and thrombotic complications in 2% to 26% [3].

Malposition of catheter is a common complication and reported incidence varies from 2-5% [2,4]. Although, catheterisation through right internal jugular vein is preferred because of its relatively straight course but subclavian catheterisation is done more commonly because of large calibre of vein and fixed course. Ideally the tip of central catheters should be at the level of mid-lower superior vena cava to cavoatrial junction. Serious consequences can occur if there is any malposition of the tip [5]. Malpositioned catheter tip can be found in right atrium, left brachiocephalic vein, inferior vena cava, right pulmonary artery, azygous veins, vertebral vein and internal mammary vein and very rarely in the extracaval structures like mediastinum, pleura, pericardium, esophagus or trachea [2]. Cannulation of right subclavian vein is associated with high risk of malposition (9.1%) compared with right internal jugular vein (1.4%) [6]. Various factors like vein tortuosity, acute angulations of the vessels, congenital anatomic variations and venous stenosis, have been identified which increase the chances of malposition. Technical factors include kinking of the guidewire, inadvertent entry of guide to other vein and use of excessive force during manipulation of guide wire or catheter [3]. In our patient because the feeding tube was advanced from the basilic vein to the SVC, injury to the SVC during manipulation of the catheter may have resulted in malpositioning of the tip in the mediastinal space. Hemothorax and pleural infusion may have resulted from infusion of fluid and blood through the catheter.

To ensure correct placement of catheter tip several techniques have been advised like ultrasound or fluoroscopic guided cannulation, continuous electrocardiographic monitoring of shape and size of P wave as the catheter is advanced, central venous pressure tracing, routine chest radiography before catheter use. One should also suspect misplacement of catheter if there is absence of low pressure, nonpulsatile, dark, deoxygenated blood aspirate from all the lumens of the catheter. However, none of these can absolutely rule out misplacement. High degree of suspicion is therefore required to detect misplacement of catheter and to avoid its associated complications. Cross sectional CT is the best imaging modality to identify the site of central catheters [4,5,11].

Although central venous catheters are increasingly used in routine practice for various indication, it is associated with significant risk of complications like misplacement, which can be life threatening. High degree of suspicion is required to detect such complications. CT should be immediately performed if there is slightest change in clinical condition of the patient after catheter insertion.

Copyright: © 2018 Nasir I, et al. This is an open-access article distributed under the terms of the Creative Commons Attribution License, which permits unrestricted use, distribution, and reproduction in any medium, provided the original author and source are credited.