Management of Varicose Veins of the Lower Extremities: A 10-year Institutional Experience

Background: Varicose veins of the lower extremities affect about 60% of the adult population in America. In Nigeria varicose veins are highly under reported, despite the fact that the disease is not uncommon. A study of varicose veins of the lower extremities, in our institution is therefore justified. Aim: To review the number of cases managed, so as to determine the prevalence, outcome and rate of recurrence. Materials and Method: During the 10-year period (March 2005-2015), a total number of 45 cases were managed. As a retrospective study, the case files of such patients were retrieved and analyzed. The data analyzed were demographic data, epidemiologic-clinical states and outcome. Results: A total number of 45 cases were managed, averaging about 4.5 cases per year. There were 30 males and 15 females with a ratio of 2:1. The age range mostly affected was 21-30 years with 13 (28.90%), followed by 41-50 year with 8 (17.8%) and the least was age above 70 years with 1 (2.22%). The left and right lower limbs were affected in the ratio of 5:2. The great and small saphenous veins were affected in the ratio of 3:1. Indications for surgery were hyper pigmentation, venous ulcer and lipodermatosclerosis. Treatment modalities were conservative (Bisgaard regime) and surgery. Recurrence rate was 5-10%. Conclusion: Varicose veins of the lower extremities are not uncommon but in developing countries like ours it is under reported due to uncoordinated actions of physicians. There are varied modes of presentation. Middle age group are more affected.

Varicose vein is a dilated, elongated, tortuous and often palpable superficial venous system of the body especially of the lower extremities. Other commoner areas are the umbilicus (Capus medusa), scrotum/ vulva (varicocele) and rectum (haemorrhoids) [1]. They can be found in the upper extremities along the distributions of the cephalic and basilica veins, though rarely. Visible varicose veins in the lower extremities are estimated to affect at least a third of the population [2] and 28.6% of people with varicose veins progressed to develop serious venous diseases. Also 3-6% of people with varicose veins in their life time progress to develop venous ulcers [3,4].

In the lower extremities, there are two main superficial veins, namely the great saphenous vein (GSV) and the small saphenous vein (SSV) [5]. The proportion of limbs whose GSV and SSV affected with varicosity ranges from 25-35%. Isolated SSV varicosity occurs in about 14% of limbs [6].

The incidence of chronic venous insufficiency and related varicose veins is variable and fluctuates according to factors such as age, sex, and geographical locations. Extrinsic environmental factors and intrinsic pathological conditions contribute to the disease, including family history, obesity, older age, pregnancy and female gender [7]. The clinical features and Doppler ultrasonography are currently used in making preoperative diagnosis Current treatment procedures are divided into conservative and surgical. The conservative methods are leg elevation, exercise, bandaging and massage, generally referred to as Bisgaard regime. The surgical methods are high ligation, multiple ligation and stripping, endovenous laser ablation (EVA), sclerotherapy and ambulatory phlebectomy. In Nigeria, a developing country, the newer techniques are currently not available. Assessing the outcome of treatment requires well defined measures and this is particularly difficult in varicose vein surgery [8].

Varicose veins do occur when there are incompetent perforators, incompetent valves of the superficial veins, deep vein thrombosis, atriovenous fistula (AVF) and pelvic mass(es) like pregnancy, tumours obstructing blood flow towards the heart. Other causes include family history and idiopathic.

During the 10-year period (March 2005-2015), a total number of 45 cases were managed. As a retrospective study, the case files of such patients were retrieved and analyzed. The data analyzed were demographic data, the limb more commonly affected, and rate of affectation of the great and small saphenous veins, as well as indications for treatment. Others include treatment modalities, complications and recurrence rate. Those with unilateral or bilateral previous excision of the great saphenous vein for coronary artery bypass graft (CABG) or repair of vascular injury were excluded from the study.

Varicose veins can be broadly classified into two types, namely: primary and secondary varicose veins. The primary cause of the condition is poorly functioning valves and decreased elasticity in the vein wall, resulting in reflux (reversed flow in the vein circuit) [9]. Valve damage is the most common aetiology of primary varicose veins, leading to increased pressure and elasticity [10]. The real aetiology of these malfunctioned valves remains elusive but is likely multifactorial [11]. This agrees with findings in our study where occupation with prolonged standing constituted the greatest majority of 20 (44.44%), (Figure 1). The secondary types have known causes, such as deep - vein thrombosis, atriovenous fistula, pelvic mass(es), like pregnancy, tumours or previous pelvic surgeries causing adhesions, obesity, smoking, and gender [12-14]. The incidence of varicose veins is highly variable, fluctuating around factors such as age, sex and geography [14]. With regard to limb affectations, our study found out that the left limb was more affected than the right in the ratio of approximately 2.1:1. Both were affected in 11 patients (29.73%), (Table 2). This finding agrees with other studies which found left sided involvement in the range of 53.8-65% [17,20,21,24]. This is because venous drainage through the pelvis follows a more tortuous course in the left lower limb due to the fact that the right common iliac artery traverses over the left common iliac vein enhancing the risk of the left side [13]. In other studies however, right sided varicose veins account for 69.9% and bilaterality in 46.2-61.3% [17,20,21,24].

Table 2: Limb involvement. The left leg is more affected (48.70%) due to the tortuous anatomy common iliac vein in the pelvis. 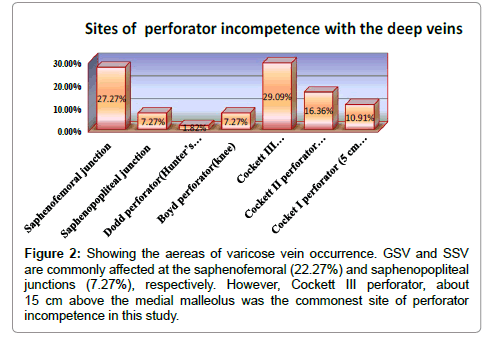 Figure 2: Showing the aereas of varicose vein occurrence. GSV and SSV are commonly affected at the saphenofemoral (22.27%) and saphenopopliteal junctions (7.27%), respectively. However, Cockett III perforator, about 15 cm above the medial malleolus was the commonest site of perforator incompetence in this study.

Varicose veins usually come to the attention of the patients because of the symptoms and signs, otherwise referred to as the complications of varicose veins. Several studies found out that such complications constitute indications for treatment and they are abnormal skin sensation (itching, aching and tingling), leg pain, limb fatigue and heaviness, swelling and restless leg syndrome [27,28]. Others are leg ulcers, thrombophlebitis, hyperpigmentation, bleeding and lipodermatosclerosis [28]. These findings agree with those in our study (Figure 3). 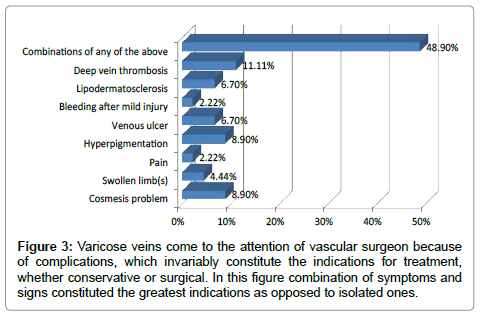 Figure 3: Varicose veins come to the attention of vascular surgeon because of complications, which invariably constitute the indications for treatment, whether conservative or surgical. In this figure combination of symptoms and signs constituted the greatest indications as opposed to isolated ones.

Presently the diagnosis of varicose veins is by both clinical, as mentioned above and Doppler ultrasound scanning. Indeed, colour duplex scanning is the ‘gold standard’ reference tests for the diagnosis of varicose veins and to assess the severity of the disease [29] as well as to locate the incompetent perforators and presence of chronic deep vein thrombosis. In some western countries, this colour duplex ultrasound is done by the surgeon both preoperatively and intraoperatively [30].

In our study period, all patients had Doppler and duplex scanning as a mandatory preoperative workup. Those with chronic DVT were excluded from surgery. Many years ago in our institution prior the study period, Trendelenburg, Perthes, Linton, Schwartz tests including cough tests, Pratt test and Fegan method were used in making diagnosis of varicose veins. Several studies, have however validated the inaccuracy of these battery of acronym of tests [31,32].

In our study, treatment was divided into conservative and surgical. The conservative treatment used was the Bisgaard regime (bandaging, elevation, exercise, massage, antibiotics). This treatment was done for all patients preoperatively and continued in the postoperative period. The traditional surgical procedures in our study included ligations (multiple, subfascial, flush). Other methods were stripping and injection sclerotherapy, using tetracyclins-saline solutions (Figure 4). In other studies, limb elevation was advised in 29.4%. Such protective measures help to reduce and relieve associated symptoms [16,33]. Varicose veins specific surgeries have been done in various studies in India, Malaysia, United Kingdom and USA and Pakistan [16,17,20]. Flush ligation of saphenofemoral junction is a well-known method with varying outcome. It is good for earlier stages but has high recurrence rate on short term follow up [14]. In our study combination of treatment was used including, ligations, stripping, and skin grafting. Other studies are in agreement with ours, because there it was shown that combination of high ligation, division and stripping and multiple stab avulsion was the gold standard for varicose vein surgery [16,34,35]. Other newer modes of treatment are technologically driven and they include radiofrequency ablation, endovenous laser treatment and endovenous laser ablation [27,36-38]. These were not used in our study because we are a developing country, deficient in the high tech-equipment and expertise. The advantages of these new methods are:

• Can be done on outpatient basis,

• Is successful on long term maintenance of vein closure,

It is hoped that as we advance technologically, the expertise and equipment will be readily available.

Treatment of varicose veins is not without complications [41]. However if the preoperative assessment is accurate and the principles of selective surgical treatment are followed, the surgeon is able to perform a curative operation with a low complication rate [42]. The common complications from previous studies are wound infection, haematoma formation, thromboembolism [43]. Others are femoral artery and vein injury. These findings compared the same with ones in our study (Figure 5). In the present study, 1 patient (5%) with bilateral saphenofemoraml ligations had thromboembolism and died therefrom. GV Muller et al and GW Hagmuller in their study reported 0.2% and 0.06% cases of pulmonary embolism postoperatively during follow up [44-46]. The reduction in thromboembolic complications is likely due to a number of factors: use of venous thromboembolic prophylaxis in high risk cases and replacement of standard crepe bandages with compression bandaging as crepe is thought not to exert even or reproducible compression on the limb and is more prone to variation in tension and has been shown to result in greater blood loss as a result of poor compression [47].

Figure 5: The complications of varicose veins treatment. Superficial site infection was the commonest. The least was femoral vein injury.

Varicose veins are a pathology that is relatively common among the youth and middle age groups. Predisposing factors are varied especially the primary types. Clinical presentations range from mild to severe, with ulcer and lipodermatosclerosis being the severe forms. At present, Doppler and duplex ultrasound scanning is the most reliable investigative tool in making diagnosis of varicose veins in terms of valve incompetence along GSV and SSV, deep vein thrombosis and perforator incompetence. Treatment is both conservative and surgical, with conservative providing effective roles in all forms of varicose veins. Current methods are technologically driven and are not available in our institution.

Copyright: © 2017 Nwafor IA, et al. This is an open-access article distributed under the terms of the Creative Commons Attribution License, which permits unrestricted use, distribution, and reproduction in any medium, provided the original author and source are credited.