Introduction: About 5.8 million patients suffer from Heart failure in the United States and this number is expected to be on the rise. These patients have been shown to be at increased risk of developing Deep Vein Thrombosis (DVT). We analyzed 10 years of data from a nationwide database of inpatients to compare the outcomes of heart failure in patients with and without DVT. Methods: A retrospective analysis was conducted using data from the Nationwide Inpatient Sample (NIS) from 1998 to 2007(10 years). All Adult patients (above 18 years old) with Heart failure during this period were identified using ICD 9 codes. Baseline characteristics and outcomes of heart failure patients with documented DVT vs. without DVT were compared during the incident admission. Multivariate regression for mortality was conducted, controlling for age, gender, and the presence of co-morbidities. Another multivariate analysis was conducted to determine predictors of developing DVT in this population of heart failure patients. Results: Among 7,880,500 patients managed for Heart failure in this database during the study period, patients with DVT were more likely to have been older than those without DVT (p<0.01). They were noted to have had longer LOS {Median LOS 5 (IQR 3-8) vs. 8 (IQR 5 -13) days} and higher mortality rates (9.3 vs. 6.9% p values<0.01). On multivariate regression heart failure patients with DVT were 38% more likely to die than those without DVT after controlling for other co-morbidities (OR 1.38 p<0.01). Conclusion: Deep vein thrombosis is associated with mortality among heart failure patients. Also increasing length of hospital stay in this population was noted to be associated with higher DVT rates.

Congestive heart failure is the most common cause of hospital admissions among elderly patients. It is the reason for at least 20 percent of all hospital admissions among persons older than 65 [1]. The American Heart Association reports that nearly 5.7 million Americans have heart failure today, with an incidence approaching 10 per 1000 among persons older than 65 years of age [2]. According to the CDC, the prevalence of Congestive Heart Failure (CHF) in the United States was on the rise from 1980-1995 and the rate of hospitalizations for heart failure also increased by 159 percent within the same time period [3]. There is also an enormous fiscal burden of Congestive heart failure; the condition currently amounts to about 1-2% of the US total annual health care costs (approximately 39 billion dollars). The national impact of this condition on Medicare is expected to get worse as the baby boomers begin to turn 65 [2].

The management of CHF has significantly improved over the last decade, with a move towards more aggressive diuresis, aquapharesis, implantable defibrillators, ventricular assist devices and heart transplants although most studies are yet to show a significant change in mort2ality. This may be because these modalities are relatively new, and as such the studies have not had enough time to follow these patients up to observe significant differences in treatment outcomes [4-7].

Some studies have suggested that aggressive diuresis reduces time to symptom resolution and could potentially reduce duration of hospital stay among patients hospitalized with CHF [8]. Based on these studies, we hypothesized that patients with CHF who develop Deep Vein Thrombosis (DVT) will have greater morbidity and mortality. We also speculated that increasing duration of hospital stay among CHF patients will increase the likelihood of developing DVT

A retrospective data analysis of the Nationwide In patient Sample (NIS) was conducted using data from 1998 to 2007. This database was created by the Agency for Healthcare Research and Quality (AHRQ) as part of the Healthcare Costs and Utilization Project (HCUP). The NIS is the largest all-payer inpatient database in the US which contains data from approximately 8 million hospital stays per year. The NIS contains all discharge data from 1050 hospitals located in 44 states approximating a 20% stratified sample of US hospitals.

Adult patients (> 18 years age) with an admitting diagnosis of CHF during the 10 year study period were included in the study. CHF was defined using International Classification of Diseases ninth edition (ICD-9) codes (428.0, 428.1, 428.2, 428.3, 428.4 and 428.9). The incidence of Lower extremity Deep Vein Thrombosis during the incident admission in this population was calculated and baseline characteristics of patients with and without documented DVT were compared over the 10 year study period using Chi square, median and Student’s T tests. A lower extremity DVT was defined using ICD 9 codes 453.40- 453.42. Length of stay was stratified into< 3 days, 3-6 days, 7-14 days and > 14 days based on criteria used in previous studies. The rate of DVT’s among CHF patients in these groups were compared using Chi square test.

The analysis was controlled for race, gender, insurance status and co-morbidities using the Charlson’s co-morbidity index. The Charlson’s index is the most validated tool used to adjust for co-morbidities in the literature today. It contains 19 disease categories defined based on ICD 9 codes. It is used to predict risk adjusted one year mortality. A higher cumulative score reflects greater likelihood of mortality over the next one year [9].

Two Multiple Logistic regression models were conducted; the first was for mortality comparing patients with documented DVT vs. those without. The second model showed the likelihood of developing DVT given the duration of hospital stay (LOS). All statistical analysis was performed using STATA MP Version 11 (Stata corp, LP College station, TX). A P-value for significance was set at 0.05.

A total of 7.8 million patients in the NIS database were hospitalized for CHF management from 1998-2007. About 0.43% of these patients were diagnosed with a lower extremity DVT during the incident admission. The baseline characteristics of the study population are shown in Table 1. The mean age of this population was 76 years, 45% were male and 76.18% were White.

Table 1: Baseline demographics of the population.

The overall mortality from the incident hospital admission was 6.88% (Table 2), median duration of hospital stay was 5 days with an interquartile range (IQR) of 3-8 days. The IQR is a measure of dispersion that describes the range where the middle 50% of the population falls. About 9.5% of the population required blood transfusion during their hospital course. Increasing duration of hospital stay was associated with avji higher incidence of DVT as seen in Table 2.

Table 3: Comparing CHF patients with Lower extremity DVT vs. those without DVT. 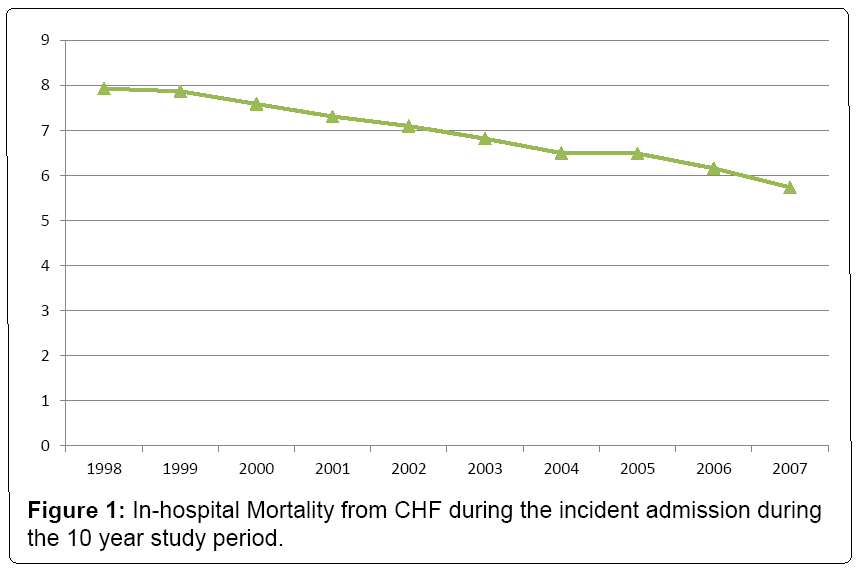 Figure 1: In-hospital Mortality from CHF during the incident admission during the 10 year study period. 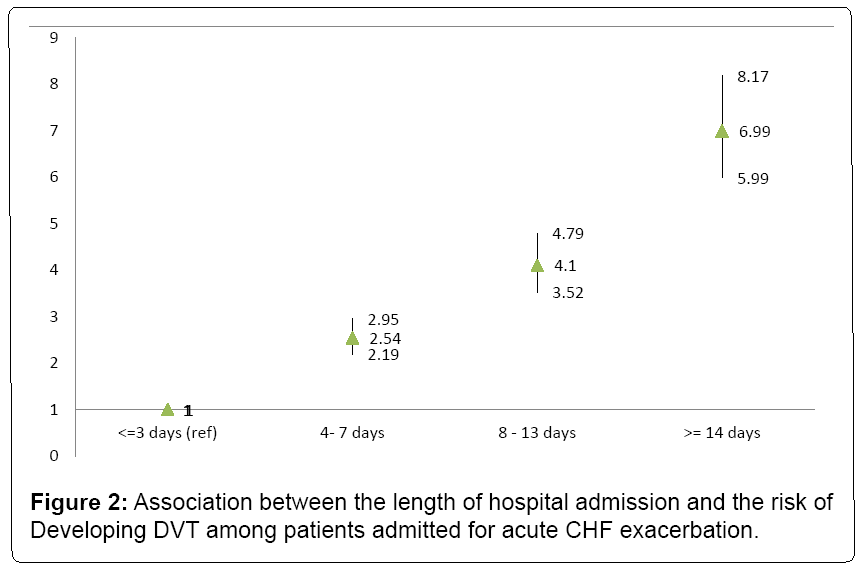 Figure 2: Association between the length of hospital admission and the risk of Developing DVT among patients admitted for acute CHF exacerbation. 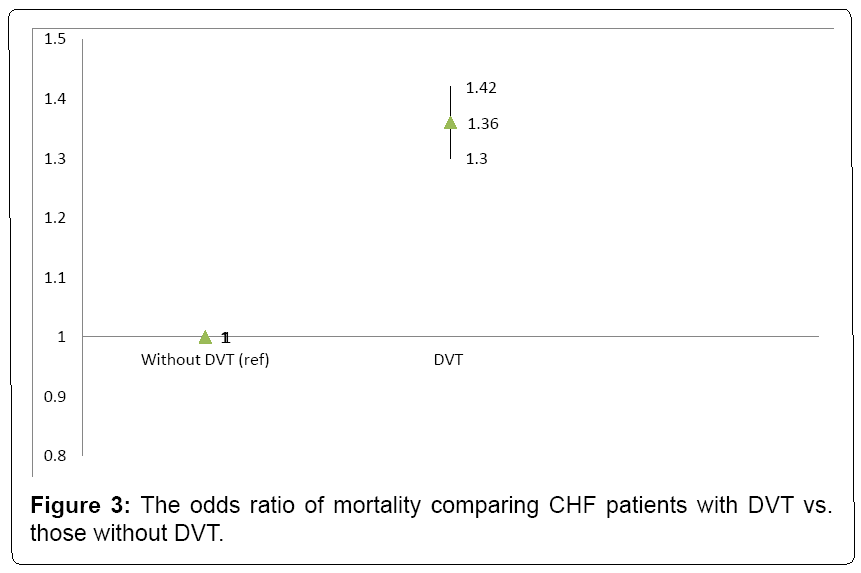 Figure 3: The odds ratio of mortality comparing CHF patients with DVT vs. those without DVT.

To the best of the authors’ knowledge, this is the largest study of its kind to explore the influence of DVT on mortality among patients hospitalized with heart failure across the United States. The findings from this study show that lower extremity DVT is associated with increased mortality among CHF patients. It also showed that patients hospitalized with CHF who have prolonged hospital courses are more likely to be diagnosed with DVT. We observed that patients who were admitted for 4-7 days were 2.5 times as likely to develop DVT as patients admitted for less than 3 days. While those who stayed between 8- 13 days were 4.1 times more likely to develop DVT than those admitted for less than 3 days. It also showed that DVT among patients with CHF is an independent predictor of mortality.

The findings of this study were in keeping with other studies showing high incidence of DVT among patients hospitalized with CHF [10]. Rothberg et al. [11] showed increased risk of DVT in hospitalized patients with a hospital length of stay above 6 days. The rate of DVT in patients hospitalized with CHF is reported as ranging from 1-59% in some series [12-14]. These studies report considerable variation in DVT rates. This variability may be attributed to surveillance bias due to differential case detection in hospitals, since we know that hospitals that screen more for DVT are likely to find more cases of DVT [15]. This study found the rate of documented DVT to be about 0.43%. Although lower than most studies, this is not unexpected since this study was conducted using administrative data which may underestimate the true frequency of DVT due to under reporting of complications in participating hospitals. Deep venous thrombosis in CHF patients may also be frequently undiagnosed since its symptoms may be masked by pedal edema and chronic venous stasis changes.

Increasing length of hospital stay in this population was associated with significantly higher incidence of DVT. This was in agreement with Monreal et al. [16] study which reported that patients with CHF and pulmonary embolism were more likely than those with only CHF to have had recent immobilization for more than 3 days. Patients hospitalized for CHF tend to spend more time in bed and acquire similar risk profiles for DVT as immobilized patients. The importance of this increased risk of DVT was underscored by the finding of a greater likelihood of in-hospital mortality among the CHF patients diagnosed with DVT.

The DOSE trial compared high dose vs. low dose diuretic therapy for managing patients with CHF, it showed that patients with the high dose approach had better relief of dyspnea, fluid loss and weight loss, with a trend towards an improvement in global assessment of symptoms after 72 hrs (P=0.06). The median duration of hospital stay with the high dose approach was 5 days vs. 6 days with the low dose approach although this difference was not statistically significant [17]. Based on the DOSE trial and our findings from this study, one may be inclined to speculate that CHF patients who are not rapidly diuresed may have a longer duration of hospital stay and be at increased risk of developing DVT and subsequent mortality.

This study also showed a decline in mortality over the 10 year period 1998-2007, this finding is rather new, as many studies done in the previous decade (90’s) did not show a change in mortality despite the advancements in CHF care [18,19]. The 21st century has been marked with increased uptake and utilization of cardiac devices that reduce sudden cardiac death in this population. This finding is corroborated by Chen et al. [19] who showed reduced mortality and readmissions for heart failure within the same time period also using a nationwide administrative database.

These findings from a large population involving 7.8 million cases of heart failure from a nationally representative sample stress the need for early mobilization and physical therapy for patients hospitalized with heart failure. The earlier we get the patients ambulatory, the shorter the duration of hospital stay and as such lower the risk for DVT and resultant mortality.

There are several limitations of this study. First, the study is a retrospective study using an administrative database; as such cases of DVT might have been under reported. The study also does not have information on the ejection fraction, New York Heart Association (NYHA) class, and baseline functional status of the patients in this study. These variables would have further characterized the subset of individuals at greatest risk for mortality from DVT. The assumption that increased duration of hospital stay led to higher incidence of DVT could be bidirectional as DVT may be the cause rather than a consequence of the longer hospitalization period observed in CHF patients as observed by Darze et al. [20] in their pulmonary embolism study.

In conclusion, patients hospitalized with CHF who have prolonged hospital course were more likely to develop DVT. The occurrence of DVT in this population was also found to be an independent predictor of mortality after controlling for other co-morbidities. We propose that discharge planning with early mobilization and physical therapy be instituted as soon as possible in these patients to reduce their duration of hospital stay and risk of DVT and mortality.

Funding for this project was obtained from the Maimonides Medical Center.

Copyright: © 2013 Bolorunduro O, et al. This is an open-access article distributed under the terms of the Creative Commons Attribution License, which permits unrestricted use, distribution, and reproduction in any medium, provided the original author and source are credited.