Objective: The aim of this study was to estimate HPV vaccination coverage in the target population residing in Sicily, five years after launch of the vaccination campaign, and to analyze its organization in this region.

Methods: Regional data as at 31 December 2013, grouped by province, issued by the Regional Health Authority were used. The organization and information materials of the campaign were also assessed (letters, posters, brochures, etc.).

Conclusions: Vaccine uptake in Sicily was lower than national figures for Italy as a whole for all cohorts and both fall far short of the targets set by the National Immunization Prevention Plan 2012-2014.

In order to promote vaccination uptake and improve coverage, at both regional and local level, the quality of information should be improved and more communication campaigns be instigated to increase the involvement of professionals.

Cervical cancer was the first cancer to be recognized by the World Health Organization as being entirely due to viral infection, and by HPV genital infection in 95% of cases [1,2].

There are more than 100 types of HPV infectious to humans, about 15 of these strains are potentially oncogenic. Type 16 and 18 of the oncogenic strains are held to be the cause of 70% of cases of cervical carcinoma [3,4].

Secondary prevention programs, based on Pap-test screening, allow a substantial percentage of precancerous lesions to be identified and treated promptly [5,6].

Recently, the availability of vaccines against HPV has paved the way to possible primary prevention of this tumor.

In September 2006 and September 2007, two vaccines against HPV were authorized for sale in the European Union: one quadrivalent and the other bivalent . Both are indicated for prevention of preinvasive and invasive infections of the uterine cervix linked to HPV genotypes 16 and 18 [7,8]. The quadrivalent vaccine also provides protection against HPV 6 and 11, which are responsible for 90% of genital warts [9].

In Italy HPV vaccines has been licensed for use since 2007. In line with WHO guidelines, The State-Regions Agreement of 20/12/2007 identified girls aged twelve (from 11th to 12th birthday) to be the primary target for free vaccination against HPV. A target of 95% was set for Vaccination Coverage (VC) within five years of the campaign launch, i.e. for girls born in 2001, who were specifically invited to be vaccinated in 2012 and whose VC was monitored at 31 December 2013 [10]. Thus, from July 2007 to November 2008 all Regions in Italy activated free anti-HPV vaccination programs offered to twelve-year-old girls. Some Regions extended this to girls of other ages.

However, despite the initiatives undertaken at local and regional level to promote vaccination, the VC rates achieved for the primary targets were not satisfactory. In view of the difficulties encountered, the latest National Immunization Prevention Plan 2012-2014 confirmed the strategy initially adopted but modified the VC targets set for the three doses of HPV in twelve-year-olds; reducing them to ≥ 70% for cohorts born in 2001, ≥ 80% for cohorts born in 2002, and ≥ 95% starting from cohorts born in 2003 [11].

The aim of this study was to assess the degree of HPV uptake in the target population resident in the Italian region of Sicily and to analyze the organization of the vaccination campaign covering this area.

Data for VC at 31 December 2013 were analyzed for the adolescent female population resident in Sicily. These were the first targets of the HPV vaccination campaign, which commenced in March 2008 throughout Italy. VC was monitored six-monthly and calculated for the resident target population, who were identified via Civic Register Office records.

A tetravalent vaccine (Gardasil) was used; this requires three doses administered by intramuscular injections over a six-month period: the first at initial appointment, the second after two months and the third, four months after the second dose. Figure 1: Organization of Regional Healthcare in Sicily. Sicily is an Italian island region, comprising nine provinces represented with different colors on the map. In each province operates a Company Provincial Health to ensure the protection of collective health, pursuing goals of health promotion, prevention of disease and disability, improving the quality of life.

Annual total VC rates were calculated for each PHA separately and for the entire Region overall.

The region of Sicily commenced HPV immunization on 1 March 2008, actively offering the vaccine free of charge to adolescents born in 1997 as well as to cohorts born in 1996.

For the 1997 cohorts, the first to be called, regional coverage achieved at 31 December 2013 was 56.5%, below the national average for Italy on that date (69.5%), a rate far below target. Slightly lower coverage was achieved for 1998 birth cohorts (55.8%) than for cohorts born in the previous year.

The highest coverage, 58.2%, was achieved for 1999 for cohorts, while only 55.3% coverage was attained for those born in 2000. Active calls have not yet been sent to cohorts born after this year.

Table 1 demonstrates the continuous annual increase in VC rates for all cohorts born in 1997, 1998 and 1999, which attests to the catch-up program carried out each year where all cohorts are actively called up. The figures clearly fall far short of the targets set by the National Immunization Prevention Plan 2012-2014.

Figures 2-6 present VC by province and the average for the entire region for cohorts born 1997-2001. 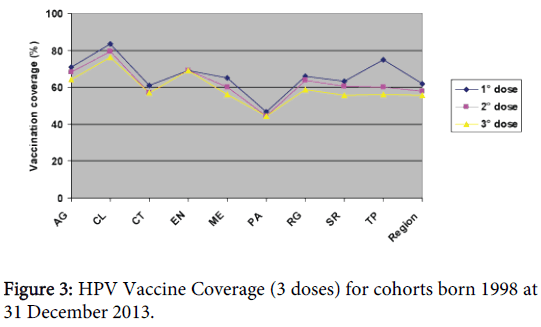 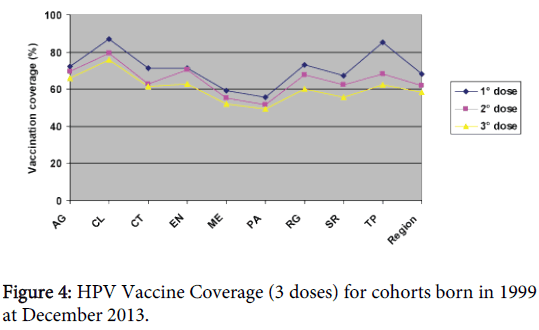 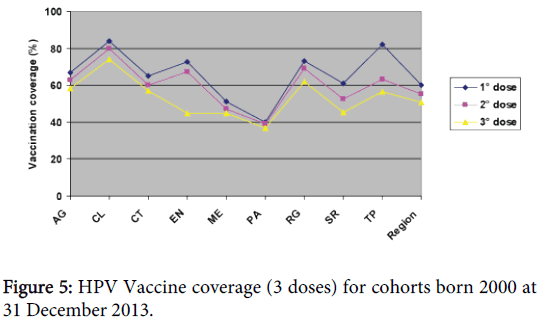 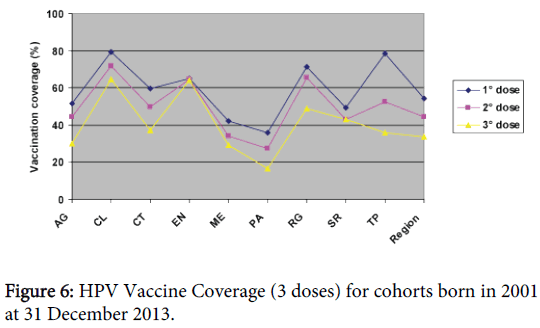 Considerable variation between the different PHAs emerged as highlighted in Table 2 with a range in excess of 30% for some birth cohorts. More specifically, at 31 December 2013, eight of the nine PHAs had been unable to achieve 70% coverage, not even for cohorts born in 1997 for which the highest rates were attained.

In the first year of the campaign offering the vaccine to cohorts born in 1997, the region of Sicily extended offer this to girls born in 1996, a strategy adopted by six other regions in Italy. The regional VC rate for these cohorts was 56.4%, slightly lower than the national average (58.2%). Figure 7 illustrates VC rates at 31.12.2013 for three doses of vaccine achieved by each PHA for 1996 cohorts. It can be seen that only one (Caltanissetta) was able to attain a satisfactory rate (81.8%).

Analysis of the data indicates that the Italian region of Sicily, five years after the start of the HPV vaccination campaign, has failed to match the nationwide average coverage rates for three doses of vaccine and this shortfall applies to birth cohorts for all years considered. Thus, the region has not performed satisfactorily in terms of the targets set by the National Immunization Prevention Plan 2012-2014. Although the data for the youngest cohorts are incomplete, VC has not increased as much as expected despite the efforts of Italian regions in both organizational and financial terms.

HPV vaccination in Sicily is provided by Vaccine Services teams employed by the Department of Preventive Medicine via active call-ups, i.e. a direct invitation by letter sent by the relevant PHA. The letter of invitation briefly describes the vaccine campaign and offers free vaccination. A brochure is enclosed which provides additional information about HPV infections and the vaccination.

In order to heighten awareness about HPV prevention and vaccination, letters are sent to both parents and the adolescents inviting them to take part in informal meetings organized in schools. These meetings include a brief slide presentation and ample time is left to deal with for questions arising and discussion of the issue.

In addition to the Vaccine Services staff, an important role in promoting vaccination in Sicily is played by family pediatricians and family physicians , both traditionally important figures and sources of advice for families. Consequently they bear great responsibility for disseminating accurate and comprehensive information to their patients.

However, despite these initiatives the results regarding nationwide coverage against HPV did not reach satisfactory levels and the statistics relating to the end of the year 2013 highlight the substantial differences in the average VC rates for three vaccine doses achieved by the different regions in Italy, these averaging 69.5% (range 26.0-86.4), 69.6% (range 25.6-82.6) and 69.4% (range 25.7-80.2) for cohorts born in the years 1997, 1998 and 1999 respectively.

The wide range in VC rates found for the different regions in Italy and the further differences found for the PHAs within the same regions are thought to be influenced by the way in which the campaign was organized and promoted, by socio-demographic characteristics of the different geographical areas and the level of acceptance by professionals involved.

The HPV vaccination campaign faced hurdles from the outset, due to the fact that it is a vaccine with goals and characteristics that differentiate it from others in the immunization calendar. Firstly, it targets a pre-adolescent, not a pediatric, age group and is aimed at preventing infections and lesions linked to the development of tumors that occur much later, mainly in adulthood. Secondly, the vaccines used offer protection only against specific types of HPV and are more effective when administered to subjects with no history of infection and thus prior to becoming sexually active. An added problem arises because information must be supplied not only to the potential recipient of the vaccination, but also to the girl’s parents. Moreover, having the vaccination does not exempt its recipient from oncological screening (Pap-test), which in Italy is carried out on women between 25 and 64 years of age. In view of these factors, it is hardly surprising that high coverage rates were not achieved in the early stages of the prevention campaign.

The fear of adverse events, lack of information about this vaccine and a lack of uniformity in the information provided by professionals are the main reasons for failing to take up the vaccine. The low level of participation of family physicians, pediatricians and gynecologists at promotional events and their diffidence regarding this vaccine are the critical areas most frequently cited by local sources. It is therefore crucial to invest resources in training healthcare workers, which include training in giving counselling, and to develop a network linking Vaccine Services to other healthcare providers in the local area in order to promote the development of shared aims and to standardize information provided about the HPV vaccine.

Copyright: © 2015 Lo Giudice D, et al. This is an open-access article distributed under the terms of the Creative Commons Attribution License, which permits unrestricted use, distribution, and reproduction in any medium, provided the original author and source are credited.