Objectives: To study the spectrum of hematological manifestations and evaluate the relationship between various hematological manifestations and CD4 cell count among opportunistic respiratory mycoses positive adult HIV patients in Calabar, Nigeria. Materials and methods: The hematological and mycological profiles of the 272 HIV infected patients with respiratory symptoms attending the Anti Retroviral (ARV) and Infectious disease clinics in Calabar, from May 2009 to July 2010 were recorded. The relationship between hematological manifestations and CD4 counts among the respiratory mycoses positive subjects were analyzed. Results: The most common haematological abnormality was anaemia with 129(47.2%) subjects affected. Also among the mycoses positive subjects’ anaemia was more prevalent in females 32(43.8%) than males 26(46.4%), but there was no relationship between mycoses and anaemia among subjects (X2=4.3, p=0.6). All subjects infected with fungal pathogens had CD4 counts below 200 cells/μl of blood. Conclusion: Subjects with mycoses are more likely to develop haematological abnormalities like anaemia, neutropenia and lymphopenia due to further suppression of their immune status. This suggests that respiratory mycoses may affect haematological parameters of patients especially the lymphocytes and CD4 counts.

The common opportunistic respiratory fungal pathogens include; Candida species, Aspergillus species, Mucor species, Cryptococcus neoformans and Pneumocystis carinii. These tend to cause pneumonia in patients with acquired defects in their defenses and are ubiquitous in nature [4,5]. The organims that causes human pneumocystosis is now named Pneumocystis jiroveci in honor of the Czech parasitologist Otto Jirovec. The organism is now considered a fungus, based on nucelic acid and biochemical analysis [6].

Haematological complications among HIV patients are generally marked with cytopenias such as anaemia, neutropenia, lymphopenia and thrombocytopenia [7,8]. The incidence and severity of the cytopenia generally correlate to the stage of the disease with anaemia being the most commonly encountered haematologic abnormality and a significant predictor of progression to AIDS or death [9,10]. The mechanism underlying these abnormalities is still obscure. A specific diagnosis of the cause and mechanism must be sought because specific treatment may be needed for its correction [1]. The main immunological complication and hallmark of HIV infection is cellular CD4 T-lymphocyte depletion for which various mechanisms have been suggested [11]. There are major differences in the spectrum of opportunistic infections in Nigeria and the West [3], but data on the hematological manifestations among pulmonary mycoses positive patients is sparse in Nigeria.

During the 14 months prospective study which lasted from May 2009 to July 2010, 272 HIV infected patients with respiratory symptoms who were able to produce sputum were enrolled to determine if they had fungal infections and to evaluate their hematologic manifestations. Patients were recruited after obtaining their informed consent from the outpatient department, wards and the Anti-Retroviral Treatment Clinic of University of Calabar Teaching Hospital and Lawrence Henshaw Hospital, Calabar. These are tertiary care hospitals with catchment areas to neighboring Local Government Areas. Ethical approval was also obtained from the ethical committee of University of Calabar Teaching Hospital. All patients were evaluated by a pre-designed protocol covering the biodata, history, marital status, presenting complaints and physical examination. Patients were excluded if they refused to be part of the study, were unable to produce sputum or were less than 16 years of age.

Five milliliter of venous blood was collected from each patient for haematological and immunological (CD4 estimation) analysis. Also two repeated samples of early morning expectorate sputum was collected from all the subjects enrolled in the study under universal aseptic precautions in suitable sterile containers [12].

Standard mycological techniques were used for the isolation, detection and identification of the fungal pathogens. Direct microscopy of sputum samples was carried out by the use of 10% KOH mount, India ink preparation, modified Gomori’s methenamine silver stained (Grocott’s stain) and wherever indicated Gram stain were prepared for each of the samples. Sputum samples were inoculated on Sabouraud Dextrose Agar (SDA) with and without chloramphenicol (16 μgml-1) in duplicates (incubated at 37°C and 25°C) alongside caffeic agar plates incubated at 37°C. Cultures were examined every other day for growth up to 4 weeks before discarding as negative [16,17]. Identification of isolates was based on gross morphology, microscopy and biochemical features. [18,19]. Serological tests were performed on the serum collected from the patients for Cryptococcus neoformans antigen detection, using the cryptococcal antigen latex agglutination system (Crypto-LA Test, USA) according to manufacturer’s instruction [20-22].

Mycoses positive subjects were those with respiratory tract disease caused by fungi. This was determined by repeated isolation of the fungi from two consecutive sputum samples which rules out colonization or sputum contamination of samples with oropharyngeal flora. Pneumocystis carinii infections were diagnosed by microscopy. To rule out the possibility of oropharyngeal colonization by Candida species, a common feature among the HIV patients, those cases with plenty of pseudohyphae on smear examination are considered as significant pathogens [20].

Table 1: Distribution of anaemia among HIV positive subjects with and without mycsoses.

Table 2: Distribution of Anaemia among HIV positive subjects with mycoses.

Table 4 summarizes the results of haematologic parameters evaluated in 272 HIV infected subjects with and without mycoses. Using Packed Cell Volume (PCV) less than 30% as an indicator of anaemia, mycoses positive patients were at a higher risk of having reduced PCV than the mycoses negative patients. The calculated mean PCV (31.6 ± 9.6) of patients with mycoses were significantly lower than those without mycoses (33.1 ± 10.4) (p=0.03). The calculated mean haemoglobin (10.4 ± 3.2 g/dl) in mycoses positive patients were significantly lower compared to the mycoses negative patients (10.9 ± 3.5) (p=0.05). Mean Corpuscular Haemoglobin Concentration (MCHC) showed no statistically significant relationship between the mycoses (31.02 ± 7.93) positive and negative (30.8 ± 7.9) patients (p= 0.8) (Table 4).

Table 4: Comparison of haematologic parameters between HIV infected subjects with and without Mycoses.

Various fungal infections were compared with the mean CD4 counts in these patients and there was a good association between them (Figure 1). All subjects infected with fungal pathogens had CD4 counts below 200 cells/μl of blood. Cryptococcus neoformans, Candida tropicalis, Absidia corymbifera and Candida guilliermondii were associated with CD4 counts <100 cells/μl of blood. 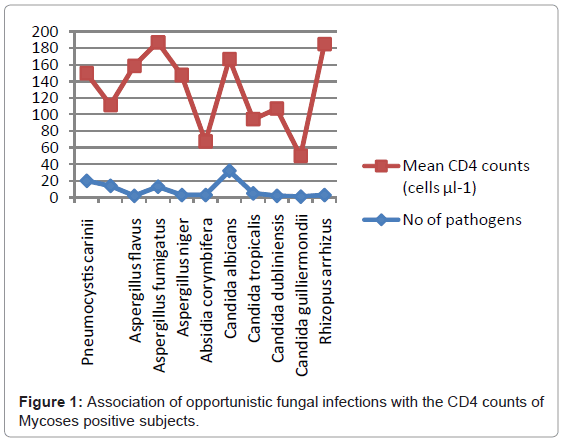 Hematological abnormalities are a common complication of HIV infection. These involve all lineages of blood cells [1]. These abnormalities increase as the disease advances [23]. The most common haematological abnormality seen in our study was anaemia. It was more prevalent among HIV positive subjects with mycoses 50 (18.3%) than the mycoses negative 79 (29.0%) subjects. The 18.3% and 29.0% prevalence among these subjects are lower than the 65% reported by Wadhwa et al. [22] in India. This may be due to the effective monitoring and treatment of HIV patients in Calabar by agencies and Government. HIV infection may lead to anaemia in many ways; the important causes include: opportunistic infections, administration of chemotherapy agents, vitamin B12 deficiency and defective iron metabolism and reutilization [24,25]. These factors were however not investigated in our study.

Anaemia was more prevalent in females 32 (37.2%) than males 18(20.9%) in mycoses positive subjects, but there was no relationship between mycoses, anaemia and gender (p=0.31). This suggests that anaemia may have resulted from other factors and not mycoses. The higher prevalence of anaemia among females suggests that they have a higher risk of developing anaemia compared to their male counterparts. Levine et al. [24] made a similar observation in their study and attributed it to sex and race whereas Volberding et al. [9] attributed it to menstrual blood loss in women and to the drains on iron stores that occur with pregnancy and delivery. The present study did not investigate the causes of anaemia among the subjects.

Leucopenia and neutropenia were noted in 28 (10.3%) and 42 (15.4%) of the patients respectively. The leucopenic status was similar to the (11.6%) reported by Wadhawa et al. [22] but neutropenia was higher than the 5 (8.3%) reported by them. Leucopenia 34 (18.3%) and neutropenia 15(8.1%) were more prevalent among mycoses negative subjects with no significant relationship with mycoses (p>0.05). This suggests that these haematological disorders could have been caused by other factors other than mycoses.

On the other hand lymphopenia was more prevalent among the mycoses positive subjects 39 (45.3%) than their negative counterparts 25 (13.4%) with a significant relationship between them (p=0.00). The 64 (23.5%) of lymphopenia reported amongst our subjects is similar to the 23.3% reported in Vellore by Kaur et al. [26]. The depletion of lymphocytes primarily of the CD4 cells subset, subsequent to cellular CD4 immunodeficiency has been noted as the hallmark of HIV infection [27]. This strongly suggests that mycoses may further deplete CD4 cells among the subjects.

Thrombocytopenia is known to be a frequent complication of HIV infection [1]. There was no statistically significant difference in the platelet counts amongst the two study groups in our cohort (p=0.6). Although the relative risk of developing thrombocytopenia in all the study populations was the same, the mean platelet counts of patients with mycoses were lower than those without mycoses.

All individuals infected with a fungal pathogen had a CD4 count <200 cells/μl of blood. This suggests that immune supression and haematological dyscrasias promote respiratory mycoses.

Total White Cell Count (TWBC), haemoglobin (Hb), PCV and lymphocytes have been reported as good predictors of CD4 counts [28], and as such may serve as useful tools in the monitoring and management of HIV patients in resource poor settings considering the fact that they are easier and cheaper to perform than techniques for assaying CD4 counts and viral load.

For further research purposes, molecular methods should be employed for the diagnosis of respiratory mycoses as microscopy and culture is insufficient for these purposes.

Anaemia and lymphopenia in HIV patients can be considered as good clinical indicators of underlying immune status. In view of the progressive increases of HIV in our population and the high prevalence of haematological disorders among HIV patients with respiratory infections, it is strongly recommended that all patients with respiratory infections be investigated for mycoses alongside haematological disorders as subjects with mycoses are more likely to develop haematological abnormalities like anaemia, neutropenia and lymphopenia. This suggests that respiratory mycoses may affect haematological parameters of patients especially the lymphocytes and CD4 counts. Pulmonary mycoses are leading causes of morbidity and mortality among adult HIV/AIDS patients as found in this study, but remain an under-diagnosed problem in resource-limited settings. This study presents preliminary data regarding hematological manifestations among HIV infected individuals with respiratory mycoses in Calabar, Nigeria.

Copyright: © 2013 Ogba OM, et al. This is an open-access article distributed under the terms of the Creative Commons Attribution License, which permits unrestricted use, distribution, and reproduction in any medium, provided the original author and source are credited.