Ascochyta rabiei is the casual agent of blight disease of chickpea (Cicer arietinum L.). The study was aimed to assess the genetic diversity of highly aggressive Ascochyta rabiei (AR) isolates (pathotypes III and IV) from Syria and its comparison with highly aggressive isolates from Pakistan. AR isolates were characterized for pathogenicity assay and genetic variability. Previously genetic variability of AR isolates have been checked with RAPD and SSR markers, here we are reporting for the first time diversity using ten Universal rice primers (URP) derived from the repeat sequence of rice genome. URP proved very useful for the characterization of isolates and clearly differentiated Syrian pathotypes from Pakistani ones. URP can be helpful in studying the population variability from AR pathotypes worldwide.

Blight disease in chickpea is caused by a fungus that exists both in sexual (Didymella rabiei) and asexual stages (Ascochyta rabiei) [1]. Pathotype variability is necessary to select the appropriate pathotype for screening genotypes in resistance breeding programme [2]. Differentiation of Ascochyta rabiei (AR) into 3 classes (pathotype I, II and III) was reported in Syria and has been widely accepted [3] and recently highly aggressive pathotype IV has been reported by Imtiaz et al. [4]. In Pakistan three pathotypes were also identified by Jamil et al. [5] and Ali et al. [6] using chickpea differential genotypes (ILC1929, ILC482 and ILC3279) and (Spanish white, Dwelley and ICC12004) respectively. In this study we have compared pathogenic behavior of Pakistani AR isolates (PAR) with pathotypes III and IV from Syria on chickpea differential genotype ICC12004 (resistant to pathotype III as mentioned by Taleei et al. [7]. The isolates were also characterized using 3 SSR markers [8] and 10 Universal rice primers (URP) that are repeat motifs obtained from Korean weedy rice and have been utilized in diverse genome like animals, plants and microbes [9]. Previous studies were based on RAPD and SSR markers for the assessment of genetic diversity of AR isolates [3,5,6,10-13]. Only SSR markers were reported by Imtiaz et al. (2011) to differentiate pathotype III and IV from Syria.

For this study, 24 isolates including 18 from different geographical locations of Pakistan alongwith 6 Syrian AR (SAR) isolates (three each of pathotypes III and IV) were used. DNA was extracted from isolates using CTAB method [14] from the pycnidial growth of fungus on V8 medium and was diluted to 10 ng/μl for PCR. URP-PCR conditions were followed as described by Aggarwal et al. [15] with slight modifications and DNA amplification was performed in a gradient thermal cycler Infinigen (Germany) programmed for 40 cycles with initial denaturation at 94°C for 4 min then 1 min at 94°C, 1 min at 55°C and 2 min at 72°C. Cycling was concluded with final extension at 72° C for 10 min. Amplified products were separated on 1.5% ethidium stained agarose gels and photographed under UV light. Un-weighted pair group method with arithmetic means (UPGMA) cluster analysis was performed on binary data from URP banding profile based on Jaccard’s coefficient using Genstat Programme, 10th ed.; Rothamsted Experimental Station, Harpenden, United Kingdom.

Pathogenicity assay was performed using 18 PAR isolates on chickpea differential genotypes viz. Spanish white (susceptible to pathotype I), Dwelley (susceptible to pathotype II) and ICC12004 (susceptible to pathotype III). One pathotype IV from Syria was also used for pathogenicity assay in this study using a mini dome assay described by Chen and Muehlbauer [16]. For pathogenicity assay, AR isolates were grown on autoclaved and boiled chickpea seeds [17] for two weeks. Seeds were then crushed with glass rod and autocalved distilled water was added to get pycnidial colonies. Spores concentration was adjusted with the help of haemocytometer and set to 2 x 105 spores mL-1 and sprayed with the help of spray pump (approx. 2ml per plant) on two weeks old seedlings of chickpea differential genotypes. Three replicates of each genotype were used and placed in growth room at 21°C for 12 h and 16°C for 12 h night at 100% relative humidity. Each replicate comprised of two plants per pot and these were immediately covered with plastic dome to create high humidity for 48 hrs to spread disease. Control plants were sprayed with water and treated in the same way as inoculated plants. Data was recorded after 14 days of inoculation based on 1-9 rating scale defined by Reddy & Singh [18] and modified for seedling assay by Chen et al. [19]. Disease severity was analyzed by Analysis of variance (ANOVA) using the program Statistix version 8.1 [20] and the means were compared with least significance difference (LSD) at 1% level of significance for comparison of treatment mean. 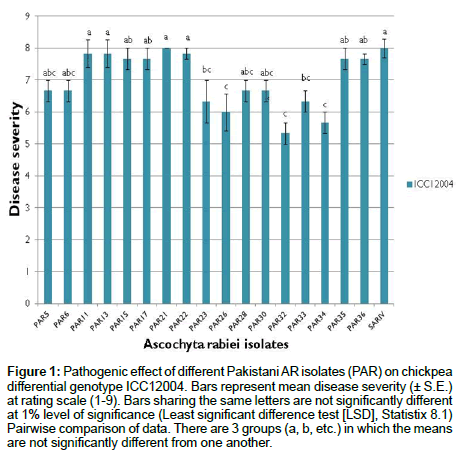 SSR marker ArH05T was recently reported to amplify Syrian pathotypes III and IV specific bands [4] while in our study two other SSR markers (ArA06T and ArH02T) also differentiated Syrian pathotypes III from IV but unable to distinguish PAR from SAR (Figure 2a). On the other hand the URP primers were highly polymorphic and not only differentiated least aggressive pathotype I (PAR 4) from rest of highly aggressive pathotypes III and IV but also differentiated PAR from SAR (Figure 2b). The cluster analysis based on UPGMA utilizing URP banding profile differentiated 24 isolates into three major groups (Figure 3). Group 1 comprised of least aggressive pathotype I (PAR 4) that out grouped singly. The second major group consisted of 2 sub-groups, 11 PAR isolates in one and 6 SAR isolates in another sub-group. The third group comprised of remaining 6 PAR isolates. The clustering of PAR isolates was not consistent with the geographical distribution of the isolates which is in agreement with our previous results [6]. URPs discriminated Syrian AR isolates from Pakistani AR that may be owing to their geographical boundaries whereas SSR markers showed same banding pattern for isolates from both countries used in this study (Figure 2a). One set of highly pathogenic 11 PAR isolates formed a cluster with Syrian isolates while other set comprising of 6 highly aggressive formed a separate group. The distinction of highly aggressive isolates into two groups might be due to complex nature of genetics of AR pathogenicity. Variation in disease reaction among different isolates was observed on ICC12004 which might be due to natural distribution of aggressiveness in the pathogen population. Differences in aggressiveness among isolates on a particular differential genotype (ICC12004) seems complicated and needs further investigations as previously many races and pathotypes have been reported for AR [21]. Thus differential genotype/s other than ICC12004 need to be identified that can clearly differentiate highly aggressive pathotypes of AR, moreover DNA markers are required for differentiating pathotype III and IV that would help also in planning strategies for effective and continuous resistance breeding. 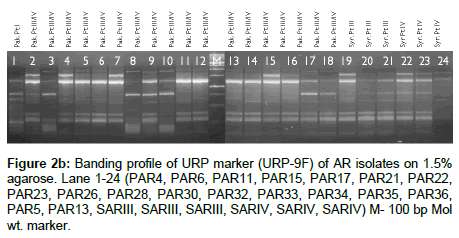 Copyright: © 2013 Ali H, et al. This is an open-access article distributed under the terms of the Creative Commons Attribution License, which permits unrestricted use, distribution, and reproduction in any medium, provided the original author and source are credited.