Leaf blight of ribbon plant caused by Alternaria alternata is a serious disease in hanging baskets in households. In vitro experiments evaluated the effect of seven isolates of Trichoderma species (from ribbon plant rhizosphere) and ten isolates of endophytic bacteria (from ribbon plant phylloplane) were tested against A. alternata. All the Trichoderma species had varied antagonistic effects against the pathogen. Among them, THA recorded maximum growth inhibition of A. alternata. Most of the bacterial isolates tested were short rods and produced bright fluorescence when exposed to UV light. Among the isolates, EBL 5 produced the largest inhibition zone and the least mycelial growth of A. alternata. The study identified the Trichoderma isolate (THA) and endophytic bacterial isolate (EBL 5) performed well in inhibiting the mycelial growth of test pathogen.

Ribbon plant (Chlorophytum comosum) is a tufted grass-like clump clump forming, ever green perennial herb belonging to the family Liliaceae. It is native of tropical and southern Africa and is widely used as hanging baskets in households. It is otherwise called as airplane plant or bracket plant or boat lily or spider ivy or spider plant. The economic part is roots used as Chinese traditional medicine for treating bronchitis, fractures and burns.

Ribbon plant is affected by a number of fungal and bacterial diseases. Among the fungal disease, leaf blight caused by Alternaria alternata is a serious disease in hanging baskets in households. This is a first report in Tamil Nadu, India [1]. Due to this infection the leaves get ugly appearance (Figure 1). Traditionally, this disease is controlled by the application of synthetic fungicides. But the indiscriminate use of fungicides resulted in the accumulation of residual toxicity, environmental pollution and altered the biological balance in the soil by over killing the non-targeted microorganisms and developed resistance to the pathogen [2]. 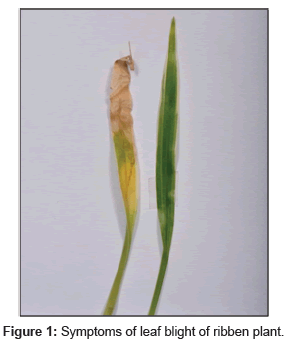 It is therefore essential to develop an effective cheap and environmentally safe non-chemical method for the management of leaf blight disease. Hence, Biological control has been developed as an alternative to synthetic fungicides and considerable success has been achieved by utilizing antagonistic microorganisms for controlling foliar diseases.

The need for alternative control strategies, particularly those involving biological control, has increased greatly in the past two decades. Growth inhibition of Alternaria species by the Trichoderma and Pseudomonas metabolites has been well researched [3-5].

Isolation, maintenance and identification of pathogen

The infected leaf bits along with some healthy portions were cut into small bits and surface sterilized using 1:1000 mercuric chloride solutions for 30 sec. The bits were washed thoroughly in sterile distilled water for three times to remove traces of mercuric chloride. The molten warm potato dextrose agar (PDA) medium was poured into sterilized Petri plates and allowed to solidify. The surface sterilized leaf bits were placed on PDA medium. These plates were incubated at room temperature for 28 ± 2°C and observed periodically for the fungal growth. Pure cultures were obtained by transferring hyphal tips to PDA medium and they were maintained on PDA slants [6]. The slants were incubated at 28 ± 2°C for sporulation for 10-18 days (Figure 2 and 3). The pathogen was identified as Alternaria alternata based on the morphological characteristics [7,8]. Further, the identity of the fungus was confirmed at National Fungal Culture Collection of India (NFCCI), Agharkar Research Institute, Pune, India.

Isolation and identification of Trichoderma species: The Soil samples were collected from ribbon plant rhizosphere at sevent different ribbon plant growing tracts of Tamil Nadu viz., Karur, Chidambaram, Periyakulam, Erode, Coimbatore, Ooty and Nasiyanur. For rhizospheric soil, plant was gently and carefully uprooted, soil tightly adhering the roots was collected, randomly selected, mixed and one forth part was used as composite rhizospheric soil sample of the region. The pH of soil was determined in 1:2 (soil:water) ratio, keeping 30 min as equilibration time.

Collected soil samples were air dried for 4 h and isolation was done by serial dilution technique. Trichoderma selective medium (TSM) was used for isolation of the isolates of Trichoderma [9]. 1 mL soil suspension was taken with the help of 5 mL sterilized pipette and poured on the Petri plate seeded with TSM. The plates were incubated at 28 ± 2°C for 5 days. Observation on the appearance of colonies was recorded from 3rd to 5th day. Individual colonies were picked up and maintained in pure culture for further study. The Trichoderma species were identified and examined under compound microscope on the basis of their cultural and morphological characters [10] and the cultures were maintained on PDA slants at 4°C for further study. Total of eight Trichoderma isolates were obtained and identified isolates were designated as THK, THC, TVP, TVE, TVC, THO and THN.

Growth inhibition assay: The antagonistic activity of Trichoderma species against A. alternata was tested by dual culture technique [11] using PDA medium. Each treatment was replicated four times with five plates per replication. Periodical observations on the growth of Trichoderma species and their ability to colonize the pathogen were recorded and also per cent inhibition of mycelial growth of pathogen was calculated by using the formula [12].

Where, C-Growth of pathogen in control plates

Morphological studies: The colony characteristics such as colony appearance, radial growth, conidial length and width were examined from cultures grown in darkness at 30°C for 96 h on PDA. Four plastic Petri plates, each containing 20 mL of media were used for each Trichoderma isolates. For analysis of colony characteristics and growth rate, mycelial discs were taken from the actively growing margin of different Trichoderma isolate grown for 3 days on PDA. The 5 mm diameter mycelial disc was placed at approximately 5 mm distance from the edge of 84 mm diameter Petri plate. The Petri plates were incubated in darkness at 30°C, colony radial growth was measured at 24 h intervals until the colony reached the edge of Petri plate. All micro morphological data were examined on cultures grown on PDA and 2% Malt extract agar (MEA) for 7 days at 20 to 22°C. The examination and measurements of conidial length and width were made from slide preparations stained with 3% KOH, which was subsequently replaced by water as the microscope preparation dried. For direct microscopic observations, 30 units of each character were measured with the exception of chlamydospores, of which 30 were not located in some cultures. Phase contrast and interference contrast microscopy were utilized in the study [13].

Isolation and identification of endophytic bacterial isolates: Bacterial endophytes were isolated from leaf portions of ribbon plants. Isolation was done following the method [14]. A total of 10 leaf isolates were obtained from the ribbon plants designated as EBL (Endophytic Bacteria Leaf) (1-10). Based on the dual culture technique, those endophytic bacterial isolates that were effective were used for further study.

In vitro bioassay: The antagonistic activity of the endophytic bacteria against A. alternata was tested by the dual culture technique [11] on PDA. The per cent inhibition of mycelial growth was calculated [12].

Where, C-radial growth in control

All the experiments were of completely randomized design (CRD) and repeated twice. To determine the effect of each bioagents on the radial growth of pathogen, the per cent reduction compared with the experimental controls was calculated. Data were subjected to analyses of variance and treatment means were compared by an appropriate Duncan’s multiple range test (P<0.05). The IRRISTAT package version 92-1, developed by the International Rice Research Institute Biometrics Unit, Philippines, was used for analysis [17].

In vitro inhibition of Alternaria alternata by fungal antagonists

Figure 4: In vitro inhibition of mycelial growth of A. alternata by Trichoderma species.

Table 1: Screening of Trichoderma isolates against Alternaria alternata in the dual culture test.

Antibiosis, mycoparasitism, food competition, secretion of chitinolytic enzymes, production of inhibitory compounds and induced host-plant resistance are the main mechanisms in biological control [18-20]. The inhibitory effect of T. viride against A. alternata might be due to the production of antibiotic substances includes viridin, gliotoxin, glioviridin, dermin and trichodermin [19].

*Ratio of length to width.

Biochemical tests: The results of the gram reaction and biochemical tests performed for the identification of endophytic bacterial isolates showed that all the isolates produced similar result with regard to gram staining and KOH test (EBL 1-EBL 8) showed negative, whereas fluorescent pigment test showed positive results. Hence they are identified as P. fluorescens. The isolates EBL 9 and EBL 10 showed positive in gram staining and KOH test, whereas fluorescent pigment showed negative results. Hence, they are identified as B. subtilis. Generally all the isolates showed positive results in motility test.

In vitro inhibition of A. alternata by the bacterial isolates

Table 3 lists the varying degrees of antagonism to A. alternata by the endophytic bacterial isolates. Among the isolates tested, P. fluorescens EBL 5 produced the widest inhibition zone, 13.6 mm, with a minimum of 25 mm of mycelia growth of A. alternata, reducing mycelial growth by 71.7% compared with the control (Figure 5). This was followed in order by P. fluorescens EBL 2, EBL 8. The other isolates (EBL 1, 3, 4, 6, 7, 8 and 9) were less effective in inhibiting mycelial growth of A. alternata in vitro.

Figure 5: In vitro inhibition of mycelial growth of A. alternata by endophytic bacterial isolates.

*Means of four replications. Values in each column followed by the same letter are not significantly different according to the DMRT method (P<0.05)

P. fluorescens Pf1 was found to inhibit the growth of the pathogen A. palandui causing leaf blight of onion [22]. P. fluorescens was effective bioagent in reducing the mycelial growth of A. helianthicausing leaf blight of sunflower [23]. Antimicrobial metabolite production was tested by determining the antagonistic activity of Bacillus subtilis isolated from soil samples against A. porri and A. solani. The antagonist was found to be effective in inhibiting both the pathogens under study [24]. Several authors reported that the effectiveness of endophytic bacteria against wide range of plant pathogens [25-27]. P. fluorescens isolate EBS 20 produced higher levels of extracellular metabolites like siderophore, salicylic acid and HCN when compared with other isolates which was highly effective in inhibiting the growth of Pythium aphanidermatum inciting chilli damping-off [28]. Similarly, antifungal compounds such as pseudobactin, HCN, salicylic acid and 2-hydroxy phenazine produced by fluorescent pseudomonas suppressed plant pathogenic fungi [29,30].

In the present study native isolate of Trichoderma harzianum and endophytic isolate of Pseudomonas fluorescens were isolated from ribben plant rhizosphere and phylloplane was found to be highly effective in inhibiting the mycelial growth of Alternaria alternata causing leaf blight of ribbon plant.

Citation: Muthukumar A, Venkatesh A (2013) Exploitation of Fungal and Endophytic Bacteria for the Management of Leaf Blight of Ribbon Plant. J Plant Pathol Microb 4: 209.

Copyright: © 2013 Muthukumar A, et al. This is an open-access article distributed under the terms of the Creative Commons Attribution License, which permits unrestricted use, distribution, and reproduction in any medium, provided the original author and source are credited.