Evaluation of Antioxidant and Antimicrobial Activity of Ficus Carica Leaves: an In Vitro Approach

Ficus carica L. (fig) belongs to the mulberry tree (Moraceae) which is one of the oldest fruits in the world.
It is used in our traditional system of medicine for healing various diseases. In a continuous bid to explore new biocompatible antioxidant and antimicrobial with the least associated side-effects Ficus carica were tested against pathogenic microorganisms; S. epidermidis, K. Pneumoniae, B. Subtilis, E. aerogens, and B. cereus. The methanol extracts were prepared and screened for in-vitro antioxidant activities an antimicrobial activity using 2,2-diphenyl-1-picrylhydrazyl (DPPH) and agar well diffusion method respectively. In addition, exract of Ficus carica prepared by soxlet apparatus and were partially purified by preparatory Thin Layer Chromatography (TLC). In conclusion, the results indicate antimicrobial activity of the extract which could be further explored for purification of antioxidant compounds.

For promoting the use of medicinal plants as useful sources of antioxidant and antimicrobial compounds, it is important to thoroughly investigate their composition and activity and thus validate their uses.

Thousands of plants are there, that are well known in traditional medicine system for their medicinal and therapeutic potentials worldwide. Similarly, Ficus carica is also one of the medicinally important plant that belongs to the mulberry tree (Moraceae) and also one of the oldest fruits in the world. Ficus carica is commonly known as Anjir [India], figs [UK], teen [Arabic]. Figs (Ficus carica Linn.) are cultivated for over 11,000 years according to literature survey and can almost certainly predate for human use. Figs are the earliest cultivated plants [1] and used in our traditional system of medicine for healing various diseases like, diabetes, ulcer, cancer, fever etc., [2]. Its strong antioxidant and biological properties are also known to diffuse the toxic free radical. It can also be used as a possible food additive or in nutraceutical and biophar, also used as a digestion promoter and a cure for ulcerative inflammation and eruption in Korea [3]. For the evaluation of the anti-pyretic effect of an ethanol extract of leaves of Ficus carica Linn, a study was carried out at normal body temperature and yeast-induced pyrexia, in albino rats [4].

Leaves of Ficus carica shows high degree antimicrobial activity of methanol extract against oral bacteria. The combination effects of MeOH extract with ampicillin or gentamicin are synergistic against oral bacteria [3]. The methanol extracts made from bark, fruits and leaves of F. carica consists strong antioxidant activity demonstrated by the four different methods including DPPH and ABTS+free radicals scavenging, PMS–NADH system superoxide radical scavenging and β-carotene– linoleic acid system. Psoralen and bergapten (5-methoxypsoralen) are two photoactive furanocoumarins reported in F. carica leaves. All but especially psoralen are used along with UV radiation in the treatment of skin diseases, such as skin depigmentation, mycosis fungoides, polymorphous dermatitis and eczema. Latex extracts of F. carica contain strong anti-angiogenic and anti-proliferative activities. It means that latex extract could be used as a potential agent for the prevention of angiogenesis in cancer and other chronic disorders [5]. Immunomodulatory effect of ethanolic extract of the leaves of Ficus carica (Moraceae) was investigated in mice, which shows promising immunostimulant properties [6].

Test microorganism which were used in this experiment are: Klebsiella pneumoniae, B. cereus, E. aerogens, B. substilus, S. epidermidus, at different concentration (30, 40, 50, 60 μg/ml) concentration was used as a standard. All tested bacteria cultures were obtained and authenticated from Department of Bioscience, Integral University Lucknow, India.

The fresh leaf of plants Ficus carica were collected from the wild sources herbal garden Pharmacy block integral university Lucknow, India, in the month of January and were authentified by Faculty of Pharmacy, Integral University, Lucknow, India.

The dried leaf powder (20 gm) of plant Ficus carica was extracted successively with 200 ml each of methanol in a soxhlet extractor for 24 hrs. The solvent was evaporated at 30-35°C. The methanolic extracts of F. carica yield a dark brownish solid residue weighing 2.44 gm (12.2% w/w).

Each sample was dissolved in 95% methanol at a concentration1μg/ml and then diluted to prepare the series concentrations for antioxidant assays. Reference chemicals were used for comparison in all assays, all steps done in triplicate. DPPH radical scavenging activity assay: The DPPH assay was done according to the method of Brand-Williams, Cuvelier, and Berset with some modifications [19]. The stock solution was prepared by dissolving 24 mg DPPH with 100 ml methanol and then stored at 20°C until needed. The working solution was obtained by diluting DPPH solution with methanol to obtain an absorbance of about 0.980 (± 0.02) at 517 nm using the spectrophotometer. A 3 ml aliquot of this solution was mixed with 100 ml of the fractions at varying concentrations (25–250 μg/ml). The solution in the test tubes were shaken well and incubated in the dark for 15 min at room temperature. Then the absorbance was taken at 517 nm. The scavenging activity was estimated based on the percentage of DPPH radical scavenged using the following equation: Scavenging effect (OD of control absorbance-OD of sample absorbance)/OD of control absorbance×100: EC50 value is the effective concentration that could scavenge 50% of the DPPH radicals. Ascorbic acid was used as standard.

Partial purification of the extract

Find the extracts from the plants for studying their antibacterial activity. A loop full of bacterial strain was inoculated in of Nutrient broth in a conical flask and incubated for 72 hrs. After solidification 0.25 ml of test strains were inoculated in the media separately and cared for proper homogenization. The experiment was performed under strict aseptic conditions. After the medium solidified, a well was made in the plates with sterile borer (5 mm). Then extract compound was introduced into the well and plates were incubated at 37°C for about overnight. All samples were tested in triplicates. Microbial growth was determined by measuring the diameter of zone of inhibition.

The scavenging the stable DPPH radical is a widely used method to evaluate the free radical scavenging ability of various samples, including plant extracts. The measured DPPH radical scavenging activity is shown in table 1 and figure 1. The F. carica leaves extract scavenging antioxidant activity was significantly increased with increasing concentration of the extract. The effect of antioxidants on DPPH is thought to be due to their hydrogen donating ability. Although the DPPH radical scavenging abilities of the extracts were significantly lower than those of ascorbic acid, it was evident that the extracts did show some proton-donating ability and could serve as free radical inhibitors or scavengers, acting possibly as primary antioxidants. The quality of the antioxidants in the extracts was determined by the percent inhibition values shown in table 2 and figure 2. Although the percent inhibition values of F. carica leaves extract were not much greater than the reference antioxidant. Lack of hydrogen donor bioactive constituents in the extract, slow rate of the reaction between DPPH and the substrate molecules resulting in low readings for antioxidant activity probably might explain the low DPPH antioxidant activity of the F. carica leaves extract [22-25]. 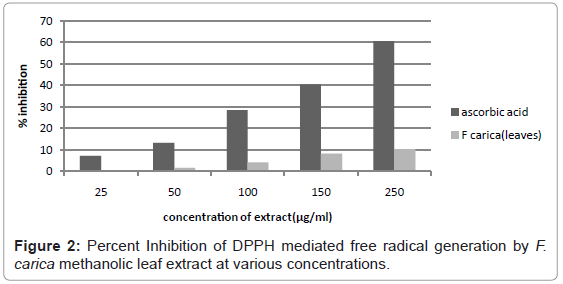 The TLC of methanolic extract for F. carica plant is shown in figure 3a and 3b with their RF values. Based on solvent system used for TLC, silica gel column will be executed. There are two clear band was found. From the figure it is evident that there are many compounds or components that are responsible for the antioxidant activity. Hence, further investigations are required to isolate, purify and characterized those compounds which are responsible for this antioxidant activity. 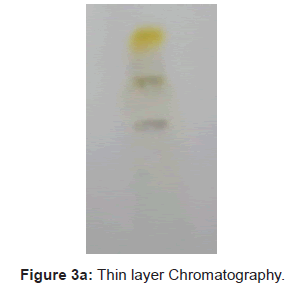 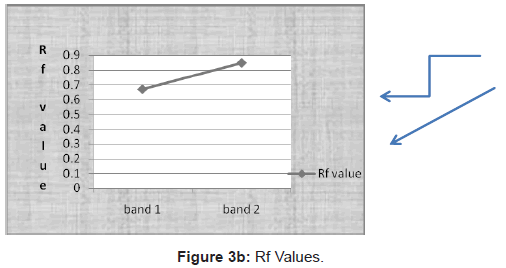 Determination of antibacterial activity by agar well diffusion assay showed that methanolic extract of F. carica leaves exhibited the antibacterial effect against pathogenic as well as non-pathogenic test bacteria. Significant effect on growth inhibition of gram positive and gram negative bacteria was also noticed. It was noted that among all tested organisms: the gram positive bacterial strain S. epidermidis registered maximum susceptibility to the methanolic extract at 60 μg/ml of the entire F. carica leaves, with the maximum inhibitory zone of 1.40 cm. MIC/MBC of various bacterial strains by F. carica are shown in table 4.

Phytochemical analysis of the extract denoted the presence of flavonoids and phenols. The presence of these compounds was detected by Thin Layer Chromatography. The obtained results might be considered sufficient to further studies for the isolation and identification of the active principles and to evaluate of possible synergism among extract components for their antioxidant and antimicrobial activity.

In conclusion, Ficus species are rich source of naturally occurring antioxidant and antimicrobial activity. Its compound play a vital role in preventing innumerable health disorders related to oxidative stress including cardiovascular diseases, neurodegenerative diseases and cancer. Our results indicated a significant increase in antioxidant activity of Ficus carica leaves extract. In addition, the extract also showed potent antimicrobial activity with all the bacterial strains with maximum inhibition against S. epidermidis. These results encourage the researchers to do further in vitro and in vivo research that will explore the role of bioactive constituents responsible for these activities. Hence, further studies are needed to evaluate the antioxidant activity and antimicrobial activity of their partially purified fractions. Further studies are also needed at molecular level.

Copyright: © 2013 Ahmad J, et al. This is an open-access article distributed under the terms of the Creative Commons Attribution License, which permits unrestricted use, distribution, and reproduction in any medium, provided the original author and source are credited.