Branched aortic endograft placement is increasingly used to treat complex aneurysms of the abdominal aorta involving visceral and renal arteries. Occlusion of one or more branches can occur due to mechanical forces between the branch and the stent graft. The present report describes a case of acute renal failure secondary to a left renal artery branch occlusion in a monorenal patient 4 months after a 3-branched stent graft procedure. The authors emphasize the successful recanalization and technical details of the procedure.

Endovascular aneurysm repair of the abdominal aorta (EVAR) has gained increasing acceptance because it is a less invasive alternative to open surgery and has a lower operative morbid-mortality rate. The endovascular treatment of complex aneurysm of the abdominal aorta involving visceral and renal arteries is more challenging since blood flow through these vessels has to be preserved. Therefore, fenestrated and branched stent grafts have been proposed as an alternative [1]. Renal artery occlusion related to a complex endovascular stent graft procedure is a known but uncommonly complicated and poorly documented phenomenon [2].

This article describes a case of acute renal failure secondary to a left renal artery branch occlusion in a monorenal patient 4 months after a 3-branched stent graft procedure. The authors discuss technical failures of the branched stent graft procedure and emphasize the need for additional stabilizing stents inside the branch. In addition, the use of minimally invasive revascularization techniques as an effective strategy to recover renal perfusion and kidney function, are mentioned.

A 53-year-old female patient with hypertension had a right nephrectomy 4 years prior due to pyelonephritis. Endovascular history included left renal artery stenting (Herculink 6×18 mm, Abbott Vascular, Santa Clara, CA) due to severe stenosis. The patient developed a Crawford type III thoraco-abdominal aortic aneurysm. A 3-branched aortic endograft including celiac trunk (CT), superior mesenteric artery (SMA), and left renal artery, was placed because the patient was considered unfit for open surgery due to a hostile abdomen (Figure 1). For branching, a Fluency® vascular stent graft (Bard Inc.; Karlsruhe, Germany) was stabilized with a Zilver® stent (Cook Medical, Bloomington, IN) inside the Fluency® vascular stent graft. This technique was used for CT and SMA branches but not for the left renal artery. Here, an additional stent inside the Fluency® stent graft (7×60 mm) was avoided to maintain the lumen. Four months later, the patient was transferred to our hospital after 4 days with anuria and an increased serum creatinine level of 7 mg/ dl. Dialysis was initiated through a transitory right femoral dialysis catheter and a duplex ultrasound (DUS) examination of the left kidney depicted an intrarenal tardus-parvus phenomenon of the spectral curve with a resistance index of 0.3. However, an adequate evaluation of the stent lumen was not possible by DUS, and a computed tomography angiography (CTA) was performed, which confirmed complete occlusion of the left renal artery branch (Figure 2A). The proximal part of the graft could not be sufficiently evaluated due to abundant metal artifacts of the aortic stentgraft, the associated markers at the orifice for the branch, and the branch itself. However, distal to the stent graft, contrast enhancement of the left renal artery and renal parenchyma enhancement could be identified through a splenorenal collateral vessel and endovascular rescue of the kidney was considered (Figure 2B). Figure 2B: The renal artery segment distal to the branch is found to be patent with a positive renal parenchymogram.

After puncturing the left brachial artery, a 5F sheath (Terumo Europe, Leuven, Belgium) was placed, 5000 U of heparin were administered intra arterially, and a guide wire was advanced to the distal descendent thoracic aorta. The sheath was changed over the guide wire to a 6F Destination® guiding sheath (Terumo Europe, Leuven, Belgium). Then, recanalization of the orifice of the left renal branch was initiated using a 5F multipurpose catheter and an angled steerable 0.035” wire (Radiofocus Guide Wire M, Terumo, Europe N.V., Leuven, Belgium). Diagnostic angiography was not performed to minimize patient contrast load. During recanalization, resistance was noted when the catheter was pushed into the branch due to a collapse of the Zilver® stent. Therefore, a 5×20 mm balloon catheter Opta® (Cordis Europa, LJ Roden, The Netherlands) was introduced and the orifice of the branch was dilated. Then, the Destination® guiding sheath was pushed into the branch and a 4-9×58 mm Jostent® Peripheral Stent Graft (Abbott Vascular Instruments, Rangendingen, Germany) was mounted on a 6x80mm Opta® (Cordis Europa, LJ Roden, The Netherlands) balloon catheter. The stent graft was deployed, covering the entire branch and expanding the proximal orifice (Figure 3). In the control angiogram, the stent graft and the distal renal vessels was found to be patent with a poor nephrogram on digital subtraction angiography (DSA). Therefore, an intraarterial fibrinolysis was initiated through an open-ended guide wire (Medtronic Vascular, Danvers, MA), and a bolus of 250.000U uroquinase was administered followed by continuous perfusion of 250.000U during 2.5 hours at a flow rate of 100.000 U/hour. Final DSA confirmed improved renal parenchymal flow (Figure 4). After the intervention the patient recovered renal function. Two weeks after the procedure, the patient gave up dialysis. A duplex ultrasound examination of the left kidney after 4 weeks revealed that the kidney was normal in size and morphology and without structural alterations. Intrarenal flow showed a normal spectral curve with a resistance index of 0.7. After 3 months follow-up, a CTA was performed that confirmed a patent renal artery branch without signs of a branch collapse (Figure 5). At the latest follow up, 9 months after the procedure, the creatinine level was recorded at 0.9 mg/dl. 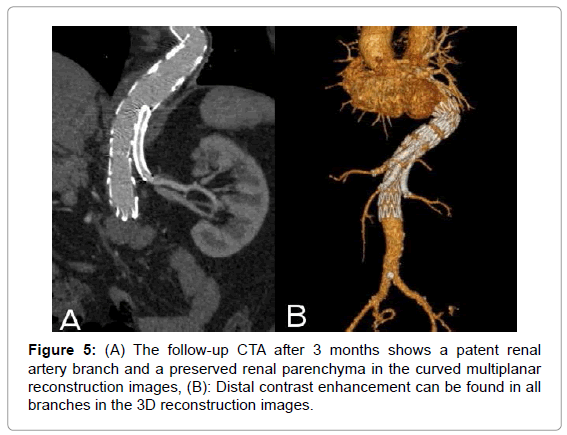 Complex aortic endovascular procedures such as branched stent graft placement require manipulation and device deployment in renal and/or visceral vessels. This may potentially affect patency and leads to early or late complications. After fenestrated and branched aortic endograft procedures vessel patency has been reported with 90% after 12 months [3]. Kidney dysfunction secondary to renal artery occlusion has been reported in some cases [3,4].

Occlusion of branched vessels after endograft procedures might occur because of neointimal hyperplasia inside a bare stent or at the distal ends of a covered stent, leading to progressive stenosis with blood flow reduction and following intrastent thrombosis [1,2,5,6]. Branched aortic endografts are modular devices that could be affected by distracting forces and intercomponent movement causing collapse or kinking of the branched stent graft with subsequent occlusion. Furthermore, renal arteries may have cranial or caudal orientation, but branches of these particular devices are designed using a caudal orientation, which increases the risk of misalignment and kinking. According to Muhs et al., branched artery occlusions occurred in vessels that were not stented during the endografting procedure [6]. Therefore, stabilization of the branched segment with an additional stent is mandatory to provide extra stability and to prevent impingement or collapse [1,3,7]. In the present case, an additional Zilver® stent inside the left renal artery branch was not considered in order to maintain the lumen in the previously stented artery. However, a collapse of the branch with subsequent stent graft thrombosis was observed 4 months after the endograft procedure.

The diagnostic approach of acute renal failure secondary to an obstructed renal artery includes serological parameters and imaging studies. Beside DSA, there are other non invasive adjunctive diagnostic imaging modalities for diagnosing renal artery occlusion including DUS, nuclear scan scintigraphy, CTA, and magnetic resonance angiography (MRA) [2,8]. Here, DUS may provide an adequate noninvasive means of renal artery stenosis and occlusion, particularly when combined with echo-enhancing agents [9]. A major concern of acute renal artery occlusion is whether an occlusion justifies an intervention since the renal parenchyma might not be salvable. Radiological findings have been proposed for predictors of renal function recovery such as the renal arterial resistance index [10]. Furthermore, reconstitution of a distal renal artery segment, which is supplied by collateral branches, and the presence of a late phase nephrogram on CTA, MRA, or DSA indicate some grade of residual perfusion [11]. However, the absence of those factors does not entirely preclude a successful revascularization [11].

Successful renal function improvement after revascularization despite prolonged renal ischemia secondary to a renal artery occlusion has been reported in some cases [2,8]. A renal perfusion pressure of 20 mmHg is sufficient to prevent anoxic injury, but is not adequate to preserve tubular function; hence, prompt revascularization techniques may achieve complete or partial recovery of renal function [11]. The period of time between the onset of symptoms and successful therapeutic intervention has been reported to be between 3 hours to 5 weeks [8]. Nevertheless, despite a successful surgical or endovascular revascularization, 25% of patients might not show an improvement of renal function [8]. In the present case, despite the prolonged ischemic time, the decision to treat was based on the presence of a patent distal renal artery segment and a positive nephrogram on CTA and DSA. A splenorenal arterial anastomosis was identified on CTA. Thanks to that vessel, renal function could be saved after revascularization, which indicates the importance of identifying and preserving these collateral vessels during branch placement.

Alternative treatment options for the management of renal branch occlusions include systemic anticoagulation, open surgery and endovascular therapy. Endovascular alternatives include primary stenting, angioplasty, the use of intraarterial thrombolysis, or a combination of these techniques [2,8]. Two endovascular approaches were discussed: 1) recanalization and intraarterial fibrinolytic treatment and 2) recanalization and primary stent graft placement. Intraarterial fibrinolysis was not considered in the initial therapy because of the high risk of anterograde atheroembolization. Furthermore, the renal branch had to be stabilized first due to the collapse at its origin. Therefore, we opted for primary stenting using a covered balloon expandable stentgraft with secondary use of intraarterial thrombolysis.

In conclusion, in the setting of a branched stent graft, an additional support must be provided by intra-branch stent placement to prevent the collapse of this segment. In the presence of radiological signs such as distal patent renal artery or a positive late nephrogram on CTA or DSA, an endovascular approach might be indicated to rescue renal function. Additional vessels such as splenorenal arterial anastomosis should be identified and preserved as they can be of mayor importance for preserving renal function in cases of graft occlusion. Endovascular revascularization techniques are a minimally invasive option for the management of renal artery branch occlusion and may preserve or restore renal function.

Copyright: © 2015 Zander T, et al. This is an open-access article distributed under the terms of the Creative Commons Attribution License, which permits unrestricted use, distribution, and reproduction in any medium, provided the original author and source are credited.