Chronic venous insufficiency (CVI) affects 10-20% of the population and is clinically characterized by persistent lower extremity edema due to underlying venous hypertension [1,2]. The spectrum of clinical sequelae ranges from persistent swelling and venous stasis changes to venous ulcers. Venous ulcers and non-healing wounds affect 0.2-1% of the population in developed countries and represent the most severe form of CVI [3,4]. Chronic lower extremity wounds, of which approximately 75% are due to CVI, are estimated to cause more than 2 million lost work days per year [5]. Though venous ulcers may be induced by trauma, the vast majority of them occur spontaneously [6].

Despite the high prevalence of CVI, it is curious that venous ulcers are relatively uncommon and the triggering factors remain unknown. Several studies have found that protein concentrations of inflammatory cytokines are significantly increased in tissue and serum from patients with CVI when compared to that of healthy controls [7,8]. Furthermore, many of these cytokines decrease following treatment [7,8]. However, it is unclear if the inflammatory milieu present in CVI contributes to disease pathogenesis, or if it is a repair response to tissue injury [9].

Though levels of inflammatory cytokines have been well documented to differ between CVI patients and healthy controls, the variability among patients and correlation with disease progression have not been well studied. We hypothesize that not only are cytokine levels different between healthy controls and diseased patients, inflammatory cytokine concentrations in serum and venous tissue are also different between patients with moderate clinical disease, classified as clinical, etiology, anatomy, pathophysiology (CEAP) Class 2 and 3, and more severe clinical disease, classified as CEAP Class 4.

Sample, data collection, and analysis for this study was approved by the Scripps Health Institutional Review Board. Informed consent following the principles outlined in the Declaration of Helsinki was obtained from each patient prior to enrollment. Inclusion criteria for this study included patients 18 years of age or older with abnormal venous function of the great saphenous vein or small saphenous vein. Additionally, patients were included only if they had a superficial segment of an incompetent vein requiring ambulatory phlebectomy for treatment as the vein was too superficial to safely treat with endovenous laser or chemical ablation. A Duplex ultrasonography scan (Philips Ultrasound, HD15 Diagnostic Ultrasound System, Bothel, WA, USA) to evaluate for vein size and reflux was performed with patients in a supine position, and CVI in the great or small saphenous veins was defined as the presence of reflux of >0.5 seconds.

Upon initial consultation for each patient, a baseline assessment for clinical, etiology, anatomy, and pathophysiology classification was recorded. Patients were ranked as CEAP Class 2, corresponding to large varicose veins; Class 3, corresponding to lower extremity edema; or Class 4, corresponding to venous stasis skin changes without evidence of ulceration.

Incompetent superficial veins over the dorsal foot or ankle identified to have reflux were outlined with a tissue marker with the patient in the standing position. Local anesthesia was obtained through injection of 1% lidocaine and the vein was identified following subcutaneous incision. The vein was then ligated proximally and distally and the intervening vein was extracted and processed using the Bio-Plex cell lysis kit (Bio-PlexTM Cell Lysis Kit, Bio-Rad, Hercules, CA, USA).

Analysis of cytokines in venous tissue and serum

Cytokine levels of venous tissue lysate and serum samples were determined using the Bio-Plex Pro™ Human Cytokine 27-Plex Assay analyzed on a Bio-Plex® 200 System (Bio-Rad, Hercules, CA, USA). Total protein concentration of venous tissue lysate was determined by the Lowry method and normalized to 210 μg/ml per reaction. Antibody-coupled capture beads were incubated with antigen standards or samples and run in duplicate, as per assay protocol. This was followed with incubation of biotinylated detection antibodies and reporter streptavidin-phycoerythrin (S-P) conjugate. Beads were then passed through the Bio-Plex 200 suspension array reader according to the manufacturer’s instructions. A 532 nm and 635 nm laser was used to excite the beads to determine the fluorescence intensity of bound S-P and the bead identity, respectively. The Bio-Plex Manager™ 6.0 software reported the concentration results in pg/mL.

Concentrations of inflammatory cytokines were not assumed to be a normal distribution. Differences between patient populations were analyzed using the Mann-Whitney U test. Significance was achieved when p<0.05.

Thirteen patients (65%) were classified as Class 2 or 3, with seven patients (35%) falling into the more severe Class 4 category. No patient fell into Class 5 or 6, corresponding to a healed or present venous ulcer, respectively. The average age of Class 2 and 3 patients was not significantly different that the average age of Class 4 patients, 62.5 years vs. 55.9 years, respectively (p=0.23). Additionally, the percentage of female patients in each group was not significantly different, 0.77% vs. 0.57% (p=0.96).

Patients were then divided into groups with more moderate disease, CEAP Class 2 and 3, versus those patients with more severe disease, CEAP Class 4. Cytokine levels measured from serum obtained via healthy and diseased veins in each group are summarized in Tables 3 and 4, respectively. Serum taken from normal veins had significantly higher protein levels of IFN-gamma in patients with Class 2 and 3 disease than Class 4 disease (95.17 pg/mL vs. 71.97 pg/mL; p=0.036) (Figure 1). This finding was replicated in serum taken from a diseased varicose vein. IFN-gamma concentrations averaged 95.47 pg/mL in Class 2 and 3 patients and 76.97 pg/mL in Class 4 patients (p=0.048) (Figure 2). 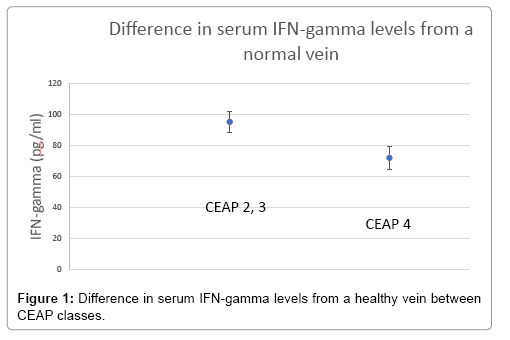 Figure 1: Difference in serum IFN-gamma levels from a healthy vein between CEAP classes. 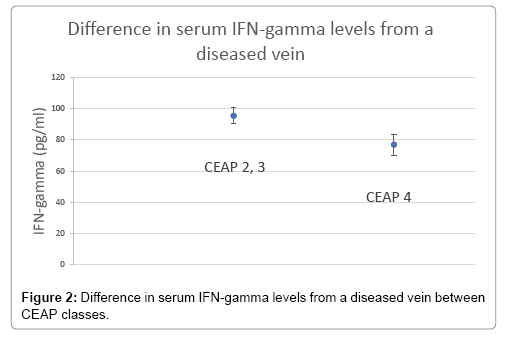 Figure 2: Difference in serum IFN-gamma levels from a diseased vein between CEAP classes.

Table 3: Mean differences in serum cytokines from a healthy vein between CEAP classes.

Table 4: Mean differences in serum cytokines from a diseased vein between CEAP classes. 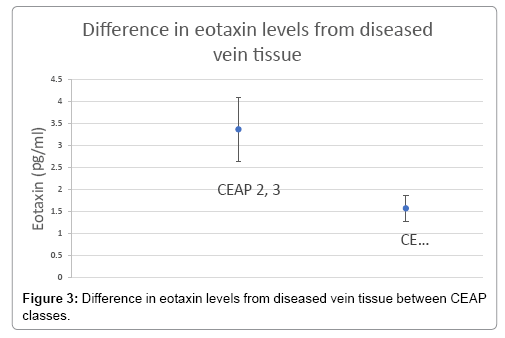 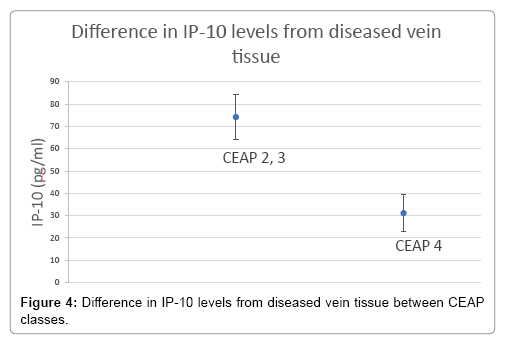 Tissue injury in CVI has been attributed to inflammatory processes responding to chronically elevated venous pressure. However, despite several studies documenting the presence of elevated inflammatory cytokines, the mechanism by which inflammation mediates tissue destruction has not been elucidated [6-10].

To explore the differences in cytokine levels between normal and elevated venous pressure environments, Lattimer et al. compared blood taken from the arm and the ankle in patients with CVI, as well as blood taken from both sites in healthy controls [10]. In their study, IL-6, IL-8, and MCP-1 all increased in concentration in the patients’ legs when compared to the arms. However, the study found that IL-6 was also increased in legs of healthy controls when compared to arm blood. Thus, the authors hypothesized that IL-6 may reflect a normal physiologic response to high venous pressures rather than represent a biomarker of CVI or act as a mediator of disease. To better control for normal physiologic differences between upper and lower extremity cytokines, serum obtained from a non-diseased vein in our study was taken from a vein in the lower extremity which had been shown on Duplex ultrasonography to be of normal size without reflux.

An additional study by Tisato et al. used multiplexed beads to measure differences in 31 cytokines between plasma taken from within a normal vein and a diseased varicose vein, as well as plasma from healthy controls. The vast majority of cytokines were no different in CVI patients’ plasma regardless of its source; only EGF, PDGF, and RANTES were noted to be increased at the varicose vein site [8]. Similarly, our data show very little difference in protein concentrations found in serum from a healthy versus a diseased vein, with only eotaxin, MIP-1B, and RANTES showing minimally increased concentrations. Thus, though cytokines are likely changed by the inflammatory process occurring in diseased veins, the circulating flow distributes inflammatory cytokines systemically.

When comparing CVI patients to healthy controls in the same study, 14 cytokines in blood samples from CVI patients showed increased levels. However, 6 months following a minimally invasive surgery to restore physiologic venous drainage (ambulatory conservative hemodynamic correction of venous insufficiency (CHIVA) procedure), several of the cytokine levels decreased to amounts similar to those seen in healthy controls [8]. A return to normal levels of inflammatory cytokines 6 months following a CHIVA procedure was also shown in an investigation by Zamboni et al. [11].

However, our study shows that among patients with CVI, those patients with more severe disease have significantly lower levels of several inflammatory cytokines, including IFN-gamma, eotaxin, and IP-10. Of note, no patients with venous ulceration were included in our study so the inflammatory changes involved in epidermal wound healing would not confound the results.

Thus, rather than a direct mediator of venous damage, particular inflammatory cytokines may function in a reparative capacity following tissue injury or as a control mechanism to inhibit further tissue destruction. Their decreased involvement may then allow for progression of CVI. Though numerous inflammatory mediators have been shown to be increased significantly in the peripheral blood of patients with CVI, levels do not necessarily correlate with clinical symptoms. One study investigated cytokine levels in patients with CVI and found that though symptoms were worse in warmer weather, certain cytokines were much higher in autumn [12].

Limitations of our study include a small sample size of C2 patients as the difference in cytokine levels between C2 and C3 patients could not be evaluated in our study. Additionally, it would be interesting to investigate changes in cytokine levels 6 months following patients’ treatment.

Rather than purely mediating destruction in venous disease, several previous studies have indicated that certain pro-inflammatory cytokines may promote healing in the proper context. In patients with venous stasis ulcers, healing within 4 weeks of treatment with compression therapy was more likely in those patients with higher levels of IL-1a, IL-1b, IFN-gamma, IL-12p40, and GM-CSF [7]. In particular, total change in IFN-gamma levels was predictive of healing, further supporting IFN-gamma as a critical component of wound healing. In fact, several studies have found that lacking pro-inflammatory cells in acute wounds results in delayed healing [13,14].

Despite the observation that inflammatory cytokines are increased in patients with CVI, the mechanism of tissue destruction has not been defined. Until now, it has been hypothesized that leukocytes are mediators of inflammatory tissue destruction. However, our study shows that several inflammatory markers, rather than continuing to increase with worsening clinical disease, actually decrease. Thus, it is possible that a component of the inflammatory milieu in CVI actually promotes healing and tissue repair.

We gratefully acknowledge the Scripps Clinic Bio-Repository for processing and providing the samples for this study. This research was funded by a Scripps Clinic Medical Group Research and Education grant.

Copyright: © 2018 Guss LG, et al. This is an open-access article distributed under the terms of the Creative Commons Attribution License, which permits unrestricted use, distribution, and reproduction in any medium, provided the original author and source are credited.