Comparative Studies of Different Indices Related to Filarial Vector of a Rural and an Urban Area of West Bengal, India

Background: Despite of all types of efforts, mosquito born disease like lymphatic filariasis seems to cause new disease burden in many countries. Proper information about the vector of these diseases is necessary to stop the transmission, but sometime information on vector is scanty from many areas. Present study is designed to collect comparative information about the filarial vector from rural and urban areas of West Bengal in India.
Methods: Regular collection of indoor-resting mosquitoes was done from the human habitations of Kolkata (urban area) and Tenya of Murshidabad district (rural area) for 2 years. Collected mosquitoes were identified and examined for different parameters following standard methods recommended by World Health Organization and pioneer workers of the field.
Results: In both the areas Wuchereria bancrofti was identified as the causative parasite of filariasis and Culex quinquefasciatus as the vector. In the urban area, overall man hour density, infection rate, infectivity rate and daily mortality rate of the vector was assessed as 27.56, 3.49%, 0.34% and 13% respectively, which was 11.86, 1.41%, 0.14% and 15% respectively in rural area. Average load of microfilaria, 1st stage, 2nd stage and 3rd stage parasite larvae in infected vectors were 8.10, 7.37, 5.38 and 2.75 respectively in urban area, which was 6.45, 5.40, 4.67 and 2.33 respectively in rural area. Among the searched shelters in urban area 4.27%, 8.85% and 1.46% were found to be invaded by 10 or more vector, infected vector and infective vector respectively, which were 1.56%, 2.08% and 0.31% respectively in rural area.
Conclusion: Different indices related to the vector mosquito were much higher in urban area of Kolkata than rural area of Tenya in Murshidabad, which indicates that, situation is more favourable in urban study areas for transmission of lymphatic filariasis than the rural one, though the situation in the rural area cannot be neglected. Available data will help to formulate an effective management strategy in those areas.

Lymphatic Filariasis (LF) is one of the leading causes of disability worldwide. More than 1307 million people live in filariasis endemic territories including 553.7 million in India and are at risk of acquiring filarial infection [1]. 20 states and union territories of India are endemic for LF with estimated 28 million microfilaria carriers and 21 million clinical cases [2].

Vector control programme in India is generally carried out by local bodies like municipalities or panchayats-linked with sanitation and solid waste disposal. Due to various reasons most of them unable to undertake effective vector control, which increased the vector and vector born disease problems like LF in the country largely. One of such reasons is incomplete information about vectors from many areas [3,4].

Information about filarial vector was available from different parts of West Bengal in India [5-10]. Nevertheless, information on vector related indices from many areas is scanty. Therefore, the present study has been carried out to collect information on different aspects related to the vector such as species composition of mosquitoes, Man- Hour Density (MHD) of the vector, percent of shelters with infected and infective vector, vector infection and infectivity rates, number of vectors containing different stages of parasites as well as total count of the parasites, age composition of the vector etc. from an urban and a rural area of West Bengal, India, with a comparative view.

Indoor-resting mosquitoes were captured for 12 minutes from 5 human habitations fixed in each locality of each area, once in a month. Collection was done by one insect collector using hand collection method [11], between 0600 to 0800 hours during the year 2009-2011 (two years). So in 2 years, a total of 384 man-hours were employed (192 urban and 192 rural). The collected mosquitoes from each habitation were identified following Christophers [12] and Barraud [13], dissected to search for different developing stages of filarial larvae including microfilariae, and identified following Simonsen [14]. After staining with Leishman’s stain, number of parasites detected in each infected mosquito was counted and noted separately for each human habitation.

For determination of age, ovaries were extracted by dissection of mosquitoes and then the ovarioles were isolated. After staining with Leishman’s stain, the slides with ovarioles were examined under microscope for number of follicular dilatations, if any. The highest number of dilatations was noted for each mosquito. Average duration of gonotropic cycle was estimated in vitro by noting the time taken between artificial blood feeding and egg laying of mosquitoes [15]. Indices related to age grading were calculated following the methods of pioneer workers of the field [16-19]. One hundred vector mosquitoes per month were dissected for this study (i.e. 1200 each from rural and urban areas). Follicular dilatations, if any were also noted separately for each infected mosquito. 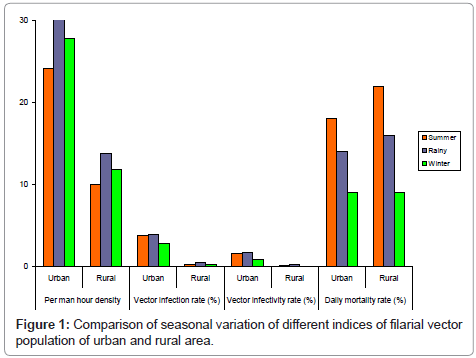 In both the area, number of mosquitoes containing different developmental stages of W. bancrofti, total count of each stage larvae and average load of parasite in infected vectors shows a decrease from microfilaria (mf) to 1st stage to 2nd stage and 3rd stage. But the corresponding figures were much higher in urban area than in rural area (Tables 4 and 5).

The urban study area of Kolkata has much dense human population and closely situated habitations in comparison to the rural study area of Tenya of Murshidabad, which increased the possibility of man-vector contact in urban area. First-hand information on different aspects related to the filarial vector was gathered during the present study from urban area of Kolkata and rural area of Tenya of Murshidabad district, West Bengal, India.

Cx. quinquefasciatus was the dominant species among house frequenting mosquitoes in both urban and rural areas. MHD of vectors from both the study areas was lower than some other endemic areas of West Bengal but higher than some other area also [5,6,8-10]. Comparison shows that, MHD was much higher in urban area than in rural area in all the months, seasons and overall (p<0.05). In both the areas MHD was higher in rainy season than those in other seasons (p>0.05).

A strong fall in the average load of microfilaria to average load of infective stages in those vectors shows a natural bearing in control of filarial transmission in both urban and rural area, which was also reported in some other studies [9,10,22]. However, average load of parasites per vectors was higher in urban area than in rural area (p>0.05).

Analysis of the parity status of the infected Cx. quinquefasciatus mosquitoes in both the study areas revealed that a high proportion of the mosquitoes acquired infection during their first blood meal and most infective mosquitoes are triparous, quadriparous and pentaparous. So mosquitoes of higher parous were of more epidemiological importance [23]. Presumptive mortality between two successive age groups shows that after passing the initial age, the vectors tend to survive the age which generally harbours the infective parasites in both the study area. So the probability of filarial transmission was almost similar in urban and rural area in respect of this index. Moreover, rate of overall daily mortality of vectors and also in summer and rainy season were lower in urban area than in rural area (p>0.05).

From the present study it can be concluded that, in both the study areas of Kolkata (urban) and Tenya (rural) possibility of filarial transmission is higher in monsoon months followed by warm months. Study related to different indices shows that urban areas were more susceptible for transmission of filarial parasite. But vector related indices from rural study area indicate that a favourable situation for transmission of filarial parasite exists also in that area and there is a possibility to create a grave situation in near future, as some rural areas of West Bengal are already considerably become endemic [6,24-26]. So, appropriate preventive measures including vector control, developing awareness among the peoples about the disease and concerned vector should be taken immediately to stop the situation to become worse.

The authors are grateful to The Department of Zoology of The University of Burdwan for laboratory facility.

Copyright: © 2013 Chandra G, et al. This is an open-access article distributed under the terms of the Creative Commons Attribution License, which permits unrestricted use, distribution, and reproduction in any medium, provided the original author and source are credited.