Diabetes is increasing by epidemic proportions throughout the world [1,2]. According to the Atlas of the IDF 2015 [3], 415 million people have diabetes in the world (9%) with a prevalence of between 9 and 10% in Tunisia. Furthermore, a person dies from diabetes every 6 seconds in the world [3]. Cardiovascular disease is the most common cause of death and disability among people with diabetes [3]. The cardiovascular diseases that accompany diabetes include angina, myocardial infarction (heart attack), stroke, peripheral artery disease and congestive heart failure. High blood pressure, high cholesterol, unbalanced diabetes and smoking and other risk factors contribute to the increased risk of cardiovascular complications. Increased cardiovascular morbidity and mortality in patients with type 2 diabetes is well established; diabetes is associated with at least a two-fold increased risk of coronary heart disease (CHD) and two- to four-fold increased risk of CHD and stroke mortality compared with patients without diabetes [4,5]. Furthermore, management strategies for diabetes have shifted from glucocentric to multifactorial, to identify and target patients’ cardiovascular risk factors.

Traditionally, patients with type 1 diabetes mellitus (T1DM) suffered microangiopathic complications, especially nephropathy, which had a negative impact on prognosis and quality of life [6]. In 1993, the Diabetes Control and Complications Trial (DCCT) demonstrated that the intensive glucose lowering therapy could reduce by 50% the incidence of microangiopathy [7]. The Epidemiology of Diabetes Interventions and Complications trial (EDIC), an extension study of the DCCT, with a mean follow-up of 17 years, revealed a 57% reduction in the relative risk of non-fatal myocardial infarction, stroke or cardiovascular death in the group that had initially received intensive insulin therapy [8]. Ever since, most therapeutic efforts in T1DM have focused on reducing glycated hemoglobin levels. However, a growing body of evidence underlines the frequent coexistence of metabolic syndrome components in patients with T1DM [9-12], resulting in the so-called “double diabetes” [13]. This fact, together with the decline in the incidence of microangiopathy, has led to cardiovascular disease now being the leading cause of death in T1DM patients over 30 years of age [14].

All these reasons highlight the importance of assessing the cardiovascular status of patients with diabetes, both type 1 and 2 diabetes to plan their care and prevent cardiovascular accidents. Various international scores have been proposed to simplify the cardiovascular stratification of patients (with and without diabetes), such as the Framingham Risk Score (FRS), adopted by the Canadian Cardiology Society [15], or the European Heart SCORE (EHS) adopted by the European Society of Cardiology [16].

Our work is a retrospective, descriptive and comparative study consisting in assessing cardiovascular risk in 100 diabetic patients older than 40 years and who were hospitalized in our department during January and February 2014 (20 T1DM patients and 80 T2DM patients).

The statistical analysis of our results was done by SPSS software.

As already mentioned in the “Materials and Methods”, all patients included in our study were aged 40 and over. 59% were women, 40% of patients with macro-angiopathic complications. The prevalence of major cardiovascular factors was as follows:

• 39% of our diabetic patients were smokers;

• 89% had an android fat distribution;

Our first step had been to assess the CVR using the two models of score mentioned above. The FRS assessed the CVR to 18.08% in our 100 diabetic patients. As for the EHS, the result was 6.38%.

Our results showed a high cardiovascular risk in our diabetic patients, as well as T1DM and T2DM. Indeed, our study showed that there was no significant difference between T1DM and T2DM patients whatever the score used. This is mainly due to metabolic syndrome, insulin resistance, obesity, dyslipidemia and hypertension [17].

Indeed, insulin resistance, assessed by eGDR in T1DM patients has been linked to chronic complications, both micro and macro vascular, and increased mortality [17]. It is showed that no patient with eGDR levels exceeding 8.16 mg kg-1 min-1 had diabetes-related chronic complications [18-23].

More, obesity is currently considered to be the great epidemic of the century, with a prevalence increasing steadily worldwide over the past 20 years. Besides the known association between obesity and type 2 diabetes, a recent meta-analysis showed the presence of obesity in childhood to be a predictor of subsequent T1DM [17]. As mentioned previously, the DCCT study demonstrated the benefits of tight glycemic control in reducing the incidence of microangiopathy. However, this intensive approach also entailed certain side effects. First, the intensively treated group had a mean of 60 severe hypoglycemias per 100 patients and year to achieve a glycated hemoglobin of 7% [7]. Second, weight gain in the intensive group was 14 kg on average during follow-up, which caused a 33% increase in the prevalence of overweight [7]. It is remarkable that in the pre- DCCT era, the body mass index of patients with T1DM was lower than in the general population. However, nowadays the percentage of T1DM patients with overweight/ obesity is close to 50%, even in children [24,25].

Furthermore, atherogenic dyslipidemia, characterized by decreased concentrations of high-density lipoprotein (HDL) cholesterol, hypertriglyceridemia and increased levels of small and dense lowdensity lipoprotein (LDL) particles, is common in patients with coronary heart disease, metabolic syndrome and type 2 diabetes, and is largely responsible for residual macrovascular and microvascular risk [17]. One proposed mechanism contributing to low HDL cholesterol levels in diabetic dyslipidemia is reduced liver synthesis of apolipoprotein (apo) A-I [26]. In healthy individuals, insulin causes an increase in apo A-I gene expression, which is decreased in patients with insulin resistance. This would explain why patients with T2DM and those with T1DM and decreased insulin sensitivity maintain low HDL cholesterol levels compared to the general population.

Otherwise, hypertension in T1DM patients is clearly associated with diabetic nephropathy, other factors, such as weight gain after insulin therapy and the presence of insulin resistance, play a key role [17]. According to the American Diabetes Association (ADA) and the European Association for the Study of Diabetes (EASD) recommendations [27,28], approximately 30% of T1DM patients were estimated to have hypertension. Several studies reported that hypertensive patients with T1DM were older, had longer diabetes duration, lower insulin sensitivity and a higher prevalence of overweight, obesity, and chronic complications, mainly microangiopathy [17]. Again, the high prevalence of overweight/obesity in these patients and its relationship with both insulin resistance and the presence of cardiovascular risk factors traditionally associated with T2DM are noteworthy.

The CVR is defined as the probability of occurrence of symptomatic cardiovascular disease within 10 years. The main objective of the assessment is set out diet and lifestyle and therapeutic measures in the context of a primary prevention coranarian, cerebrovascular and peripheral vascular accidents. To assess the CVR of our diabetic patients, we used two international models of score: FRS and EHS.

The Framingham Risk Score (FRS) is based on findings from the Framingham Heart Study and has been adopted by the Canadian Cardiology Society [15]. It is a gender-specific algorithm (Figure 1) used to estimate the 10-year-cardiovascular risk of an individual. It was first developed based on data obtained from the Framingham Heart Study, to estimate the 10-year risk of developing coronary heart disease. In order to assess the 10-year cardiovascular disease risk, cerebrovascular events, peripheral artery disease and heart failure were subsequently added as disease outcomes for the 2008 Framingham Risk Score, on top of coronary heart disease [29]. Individuals with low risk have 10% or less CHD risk at 10 years, with intermediate risk 10-20%, and with high risk 20% or more. The Framingham Risk Score has been validated in the USA, both in men and women, both in European Americans and African Americans [29] but there are two limitations. First, the FRS predicts only future coronary heart disease (CHD) events, however, it does not predict future total cardiovascular events, meaning that it does not predict risk for stroke, transient ischemic attack, and heart failure. The predicted risk for an individual usually is higher with the 2008 Framingham General Cardiovascular Risk Score than with the 2002 Framingham Risk Score. Second, the FRS could overestimate (or underestimate) risk in populations other than the US population and within the USA in populations other than European Americans and African Americans, e.g., Hispanic Americans and Native American. It is not yet clear if this limitation is real, or appears to be real because of differences in methodology, etc [30]. This problem also arises in Tunisian population. That’s why ERS was also used and compared the two risks. 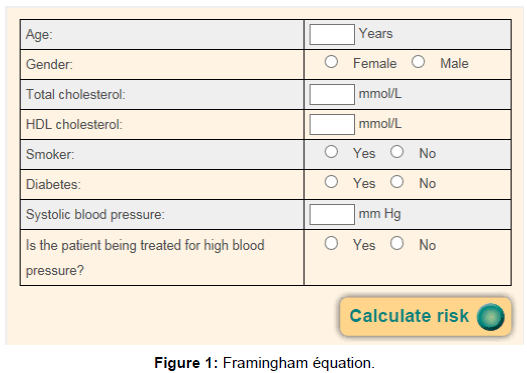 The European Heart SCORE (EHS) has been adopted by the European Society of Cardiology [16], it is in fact an European alternative. SCORE (Systemic Coronary Risk Estimation for) was developed in Europe to account for geographical differences (available models applicable to Northern and Southern Europe). It not assesses the overall coronary risk as Framingham in 10 years but the risk of cardiovascular death in 10 years. SCORE takes into account the same risk factors that Framingham (except HDL-C levels, the existence of diabetes and ages below 40 and above 65 years) [31]. That’s why were forced to recruit in our work patients whose age range was between 40 and 65 years old. There are low risk charts (like France and Germany) and high risk charts (like Armenia and Bulgaria). In our study, we used the low SCORE Risk Charts (Figure 2) because of geographical proximity. Now, we can explain the observed difference between the two models used in our study. First, the adapted population of each score is not the same (North Americans for the FRS and Europeans for the EHS). Second, the meaning of each one is not the same: the overall coronary risk in 10 years is assessed by the FRS and the risk of cardiovascular death in 10 years is assessed by the ERS.

The determination of the cardiovascular status of patients with diabetes is extremely important seeing that cardiovascular accidents are the leading cause of death in these patients. The goal is to stratify their care in order to minimize cardiovascular deaths. We currently have cardiovascular scoring models (FRS and EHS) but there are two major problems. First, we do not have until now model adapted for the people of the Maghreb. Second, a specific score for diabetic patients would be desirable to take into account other cardiovascular risk factors related to diabetes such as diabetes evolution of duration, glycemic control, the incidence of hypoglycemia, the existence of certain complications.

This work was done in Service C of Nutrition, Diabetology and Metabolic Diseases of the National Institute of Nutrition and Food Technology in Tunis (Tunisia).

Copyright: ©2018 Nadia BA, et al. This is an open-access article distributed under the terms of the Creative Commons Attribution License, which permits unrestricted use, distribution, and reproduction in any medium, provided the original author and source are credited.