Jaundice is the useful indicator of severe malaria [1]. World Health Organization (WHO) defined severe malaria if the patients had jaundice by clinically examination of the sclera and/or mucosal surfaces of the mouth [2]. However WHO did not mention the cut-point of total bilirunin level of jaundice [2-4]. There are no normal levels of total bilirubin as total bilirubin is an excretion product, and a level found in the body reflects the balance between production and excretion. Different sources provide reference ranges that are similar but not identical. However jaundice becomes visible when total bilirubin level is about 2-3 mg/dl [5,6]. The objective of this study was to find cut-off point of total bilirubin level which was high sensitive to detect fatal outcome in severe falciparum malaria patients with jaundice.

Treatment: All severe malaria patients were treated with intravenous arteunate 2.4 mg/kg at time 0, 12, 24 hour of admission, then once daily until the patients could take oral medication, then treatment was switched to artesunate 4 mg/kg/day for 3 days combined with mefloquine 25 mg/kg in 2 divided doses 12 hourly apart. All patients were admitted in intensive care unit. The survived patients were continuously admitted to the hospital for 28 days for clinical and laboratory follow-up.

Table 2: Clinic-pathologic manifestations of study patients on admission and number of deaths. 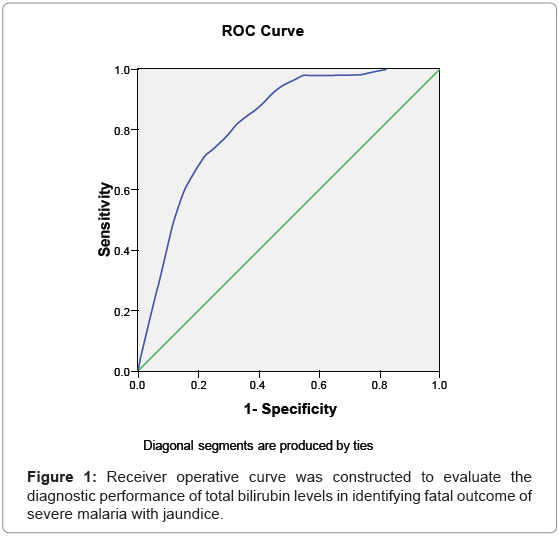 The causes of hyperbilirubinemia in malaria included intravascular hemolysis from parasitized and non-parasitized red blood cells and also hepatic dysfunction during acute malaria illness [1]. Although there are earlier literatures regarding jaundice in falciparum malaria, no report shows total bilirubin level of 2 mg/dl is higher sensitive than 3 mg/dl to predict fatal outcome in severe malaria [7-10].

The study was supported by Faculty of Tropical Medicine, Mahidol University, Gastroenterological Association of Thailand, the Office of the Higher Education Commission and Mahidol University under the National Research Universities Initiative, Thailand.

Copyright: © 2013 Tangpukdee N, et al. This is an open-access article distributed under the terms of the Creative Commons Attribution License, which permits unrestricted use, distribution, and reproduction in any medium, provided the original author and source are credited.